Some time go, you might remember the snotty incident where Senator Barbara Boxer reprimanded Brigadier General Michael Walsh of the Army Corps of Engineers for having the audacity to address her as "Ma'am" - a respectful term used in the military to address persons of higher rank.  She wanted to be addressed as "Senator" because she "worked so hard to get that title."  Oooooh, that made me mad!

So here's a brilliant (and hilarious) parody of that little incident - along with a reminder to vote this arrogant twit out of office. 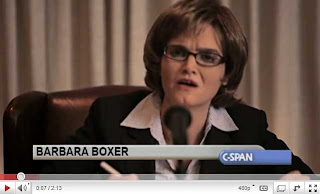 Posted by Patrice Lewis at 7:34 PM