I don't believe I have a lot in common with your average "green" tree-hugging liberal.  But there IS one thing about which I agree with them: their gripe against excessive packaging on everyday items.

This week we received two packages of pre-cooked bacon from our local food drive.  ( As I've explained before, we're one of the "cleanup" families for the food distribution. If they have leftovers, they call us.)  Anyway, we received two boxes of Oscar Mayer "100% real" bacon. 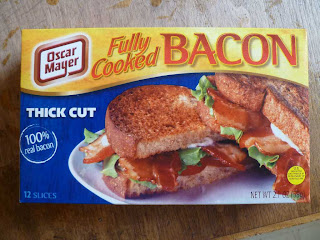 I was making biscuits and gravy for breakfast the other morning, so I decided to open up a box of this pre-packaged stuff to add to the gravy. 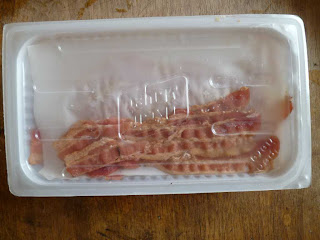 There were 12 small slices of bacon in this box, layered with waxed paper.  Needless to say, the real item didn't have even a fraction of the heartiness and volume promised on the cover photo.  Whatever. 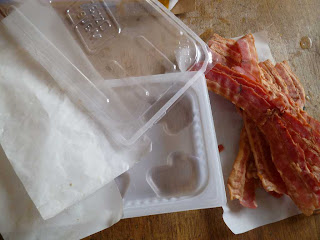 For twelve small slices (barely enough to flavor the gravy, by the way), I had to contend with a box, the waxed paper, and the plastic container and lid. 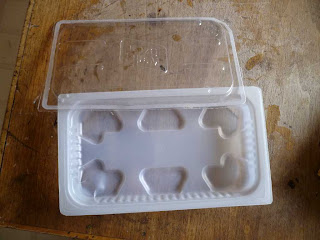 I burned the box and paper in our woodstove (our standard procedure for all burnable garbage during cooler months), but this plastic container and lid remain.  I've put them in the recycling bag in hopes our limited recycling options in Coeur d'Alene can handle the weird #7 plastic from which this packaging was made.  If they can't, into the trash it goes.

C'mon, folks - is it really necessary to have this level of packaging on twelve little bitty slices of pre-cooked bacon?  Don't get me wrong, the bacon was fine; but remember, it was given to us.  Who in their right mind would actually buy this stuff?  There's no way I would ever spend money on this kind of thing because it bugs me when something so ephemeral has so much packaging - which, incidentally, will last, oh, thousands of years.

Needless to say, this is the most minor of examples about ridiculous product packaging.  We are such a throwaway society that sometimes it sickens me.

Okay, I'll get off my soapbox now.
Posted by Patrice Lewis at 6:39 PM