See UPDATE and ADDITIONAL UPDATE below.

The girls and I came home late this afternoon from our weekly jaunt into Spokane for Younger Daughter's music lesson.  Nearly at the point where we turn off to get to our house, we came upon the scene of an accident. 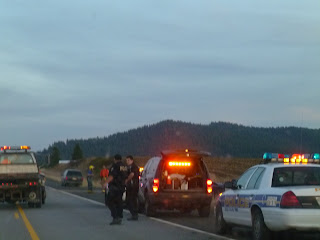 We saw one truck rolled on its side, but in the chaos of trying to inch past the emergency vehicles, not much else registered.  (Older Daughter was trying to get pictures but we went by before she got the hang of the camera.)

Then a couple hours later when I got a choked call from our neighbor, Maid Elizabeth.  "Please pray for Zach," she said.  "He's down at Gritman Medical Center in Moscow (Idaho)."  All she knew was that he was in a car accident.

No, I don't know if it was the same accident I saw.  Probably not.  But the coincidence was rattling.

Zach "Smith" is 18 years old and as nice a young man as you'll ever meet.  The whole "Smith" family is one of those close-knit, truly decent families that you seldom find nowadays.  I have no doubt that Zach's accident was truly an accident, not a result of wild or irresponsible driving on his part because he's not a wild or irresponsible kind of fellow.

As of this writing, we don't know his condition or prognosis.  But it hurts to think of this giant (6'4") sturdy young man facing unknown injuries down at Gritman.

UPDATE: I didn't sleep well last night, worrying about Zach.  So early this morning I emailed a mutual friend to see if she knew Zach's status.  She replied right away:

Zach came home last night.  He hit a moose and tore the top of his car off and left the car in pieces.  His right shoulder and arm are bothering him, but x-rays showed no broken bones.  He is very bruised and swollen, but in reality, walked away.  Only by the grace of God!

ADDITIONAL UPDATE: I spoke to Zach's grandmother this morning.  Apparently the accident was worse than we thought.  The moose shattered the windshield (Zach still has glass in his eyes) and peeled off the roof of the car.  Because of Zach's height, he got thiiiis close to being decapitated.  Any animal big enough to take the roof off a car is big enough to take a head off of shoulders.

Zach was sleeping when I called, and his grandmother sounded pretty shaken.  This family's strong faith is upholding them.

Near-misses are frightening things.  And no, the moose didn't make it.
Posted by Patrice Lewis at 9:47 PM