I know some people whose twelve year old son who is very nearly functionally illiterate. I am frequently in a position to hear him read out loud, and it's like listening to a seven-year-old read. It's so painful to listen that I don't ask him to read out loud very much.

The sad thing is, this boy's mother is a highly-respected schoolteacher.

There's nothing wrong with this boy's intelligence. He's a little hyperactive, sure, but no more than any typical active kid. I was raised with three brothers, and active boys don't bother me.

No, as I see it this boy can barely read because there are so few books in the house, but enormous amounts of media.

A huge television is in a prominent location in the living room. There is another television in the parent's bedroom. A third television - drum roll please - is in the bedroom of this boy and his older brother.  They also have every electronic whiz-bang toy on the market - GameBoys and X-boxes and too many other things to list. 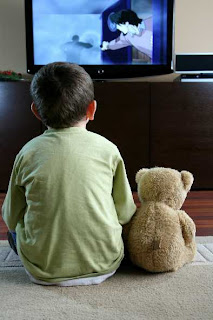 Blitzed with so much passive media, what kid in his right mind would choose the more active activity of reading?

Sadly, this is not an uncommon situation. Quite the opposite. Children are so regularly blitzed with television and other media that they do little else during their waking hours. And rather than chastising parents for using the damned idiot box as a babysitter, articles are printed that merely call for increased quality in children's programming. Grrrr.

The horrifying thing about television is it is the single-most preventable barrier to intelligence. Children who grow up without television, or with television severely restricted, are (ahem) forced to DO things. They build forts in the back yard and cities with blocks. They dream. They read. They imagine. They live in a make-believe world that is NOT populated by TV cartoon characters. All of these necessary and critical play habits later translate into intelligence.

But none of this is possible if the poor kid is turned into a zombie by his own parents. 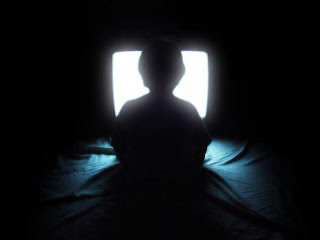 Contrary to the actions of advocacy groups that lobby for higher-quality children's television programming, it's not the quality of programming that's the issue here (quality is a whole different issue!); it's the quantity. While children are watching television, they aren't doing anything else. 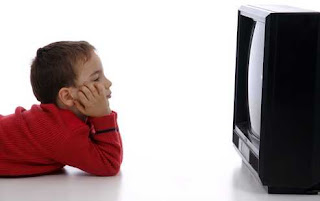 They sure as heck aren't reading.They aren't interacting with real people. They aren't learning critical social skills. Instead, they grow up thinking all the world's problems should be solvable within a half hour (the length of a sitcom) because that's all they've ever seen. As they get older, they're also sucked into video games, electronic toys, computers, and other media. And they never read books. They grow up to be virtually illiterate.

I confess I find it almost physically nauseating to see children strung out in front of a television, slack-jawed. It's worse when it involves babies and toddlers.

I remember an incident when our Oldest Daughter was about four months old. I went to a local laundromat to wash some sleeping bags. Older Daughter, of course, was with me, and I laid a blanket across the folding table while the washing machines hummed and we played little games. Another man was in the laundromat as well, and we got to talking. He and his wife also had a baby about the same age, he told me. But - and this was said with a certain amount of pride - his wife liked to put the baby in a wind-up swing in front of the television. 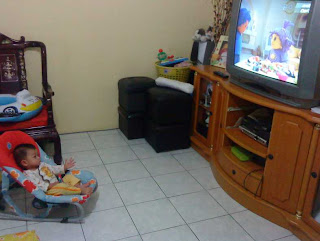 I believe parents are doing a horrible disservice to their children by encouraging constant exposure to media. Rather than channeling my friend's son's hyperactivity into sports, they pacified him with television. (To their everlasting credit, they haven't drugged him with Ritalin.)

Many years ago I saw a magazine ad that was so awful it stopped me in my tracks.

The ad featured two children staring, zombie-like, in a darkened room at a television. In bold letters below the children was the word "HELP."

At first I thought, “Good. Someone is trying to break those poor kids loose from the grip of the stupid television.”

Then I read the text of the ad:

“The average American child spends close to four hours a day planted in front of a television. Which is why [name of company] is happy to sponsor the [name of an “educational” television series]. Charming characters present classic, positive stories that help you guide your children through the kinds of lessons you actually want them to learn. Courage. Honesty. Responsibility. After all, what better place to reach your children than right where they already are.”

Does anyone else find this logic sickening?

No expectation that the parents should actually take responsibility for their own children’s moral teachings. God forbid that you should have to interact with the little tykes. Instead, stick ’em in front of the TV and turn their brains to mush so you don’t have to be bothered.

The single best expression of my aversion to television and children was a poem written by Roald Dahl, author of Charlie and the Chocolate Factory, Matilda, and other great books. It goes as follows:

The most important thing we've learned,
So far as children are concerned,
Is never, NEVER, NEVER let
Them near your television set --
Or better still, just don't install
The idiotic thing at all.

In almost every house we've been,
We've watched them gaping at the screen.
They loll and slop and lounge about,
And stare until their eyes pop out.
(Last week in someone's place we saw
A dozen eyeballs on the floor.)

Oh yes, we know it keeps them still,
They don't climb out the window sill,
They never fight or kick or punch,
They leave you free to cook the lunch
And wash the dishes in the sink --
But did you ever stop to think,
To wonder just exactly what
This does to your beloved tot?

IT ROTS THE SENSE IN THE HEAD!
IT KILLS IMAGINATION DEAD!
IT CLOGS AND CLUTTERS UP THE MIND!
IT MAKES A CHILD SO DULL AND BLIND
HE CAN NO LONGER UNDERSTAND
A FANTASY, A FAIRYLAND!
HIS BRAIN BECOMES AS SOFT AS CHEESE!
HIS POWERS OF THINKING RUST AND FREEZE!
HE CANNOT THINK -- HE ONLY SEES!

We'll answer this by asking you,
'What used the darling ones to do?
'How used they keep themselves contented
Before this monster was invented?'
Have you forgotten? Don't you know?
We'll say it very loud and slow:

The nursery shelves held books galore!
Books cluttered up the nursery floor!
And in the bedroom, by the bed,
More books were waiting to be read!

Such wondrous, fine, fantastic tales
Of dragons, gypsies, queens, and whales
And treasure isles, and distant shores
Where smugglers rowed with muffled oars,
And pirates wearing purple pants,
And sailing ships and elephants,
And cannibals crouching 'round the pot,
Stirring away at something hot.
(It smells so good, what can it be?
Good gracious, it's Penelope.)

The younger ones had Beatrix Potter
With Mr. Tod, the dirty rotter,
And Squirrel Nutkin, Pigling Bland,
And Mrs. Tiggy-Winkle and-
Just How The Camel Got His Hump,
And How the Monkey Lost His Rump,
And Mr. Toad, and bless my soul,
There's Mr. Rat and Mr. Mole-
Oh, books, what books they used to know,
Those children living long ago!

So please, oh please, we beg, we pray,
Go throw your TV set away,
And in its place you can install
A lovely bookshelf on the wall.

Then fill the shelves with lots of books,
Ignoring all the dirty looks,
The screams and yells, the bites and kicks,
And children hitting you with sticks-

Fear not, because we promise you
That, in about a week or two
Of having nothing else to do,
They'll now begin to feel the need
Of having something to read.

And once they start -- oh boy, oh boy!
You watch the slowly growing joy
That fills their hearts. They'll grow so keen
They'll wonder what they'd ever seen
In that ridiculous machine,
That nauseating, foul, unclean,
Repulsive television screen!

And later, each and every kid
Will love you more for what you did.
Posted by Patrice Lewis at 8:06 AM