My canning closet is complete!

Some of you may remember from a long time ago that we had plans to turn an unused bathroom into a canning closet.  I'm thrilled to report that it's done!

This project goes back to last spring.  At that time, my husband noted the extensive unrest going on in the world at that moment: North Korea, Afghanistan, riots in Greece, bank failures, European unrest, the BP oil spill. He paused, then added, “A canning closet is a very good idea.”

So anyway, last March I assembled all my canning paraphernalia into the bathroom, but since the non-working facilities were still in place (shower stall, toilet, sink), I had to work around them. 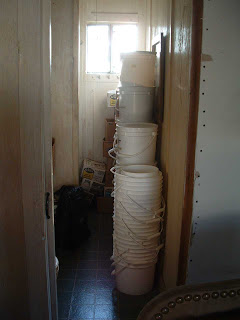 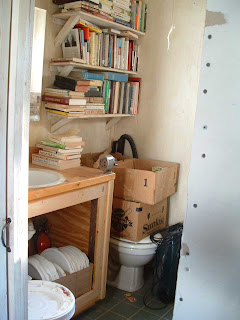 In mid-June, we emptied the bathroom of all my canning supplies once again... 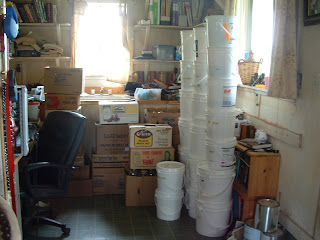 ...and Don stripped out the shower stall, sink, and toilet. 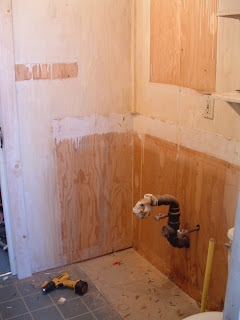 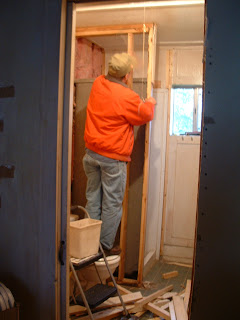 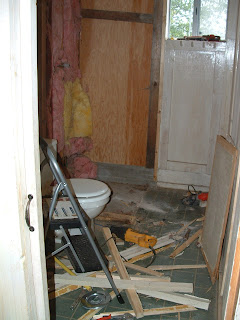 Then our home business started getting busy for the summer, so once again all the canning stuff and food buckets were moved back into the now-stripped-out bathroom to wait for our slow season. Now that our business has slowed down, Don has worked hard to finally turn this space into a proper canning closet.
Last June we were given two enormous and beefy shelving units by a new neighbor who was cleaning out some unneeded stuff from a shop building. 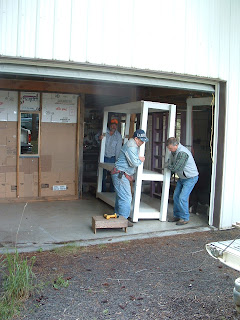 We disassembled the units and brought them home, where they stayed in the barn all summer.
Now we started installing the shelf boards into the room.
First shelf: 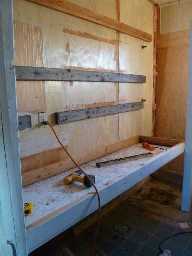 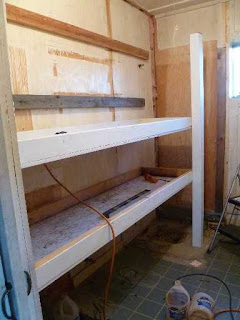 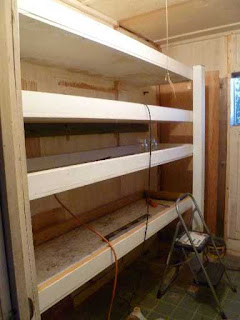 Don secured the shelves tight enough to support an adult's weight.  (He says they remind him of the bunks during his Navy days.) 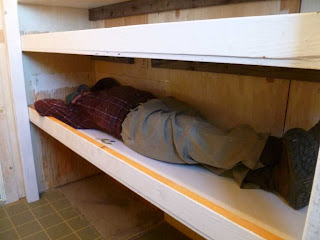 We also installed a slimmer, more colorful shelving unit on the opposite wall. 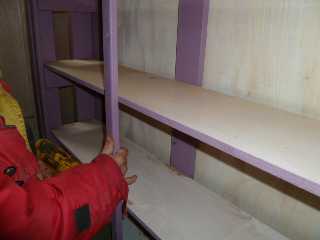 Next step: the laborious transferring of all the canned goods that were temporarily stored in Younger Daughter's closet (this is just a fraction of what was stored there).  She says this blog post should be titled "Hallelujah!" because now she has her closet back. 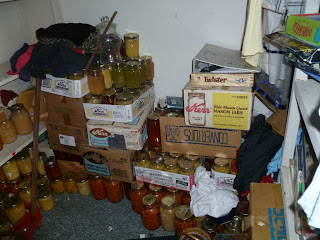 We piled all the jars up, waiting for me to inventory and sort.  This is nowhere near all the jars I have canned. 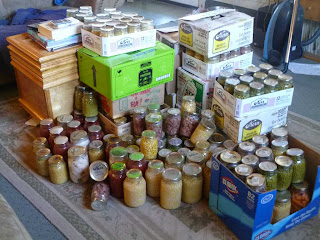 It took several hours, but eventually all the jars were inventoried and organized.  We still have to install thin removable brackets across the front of each shelf in case of earthquake. 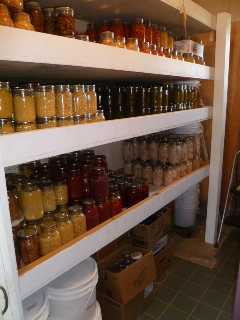 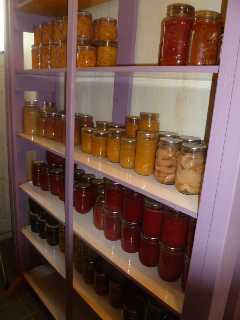 With the two sets of shelving units, the little canning closet is crowded with not much room to move around.  But it holds a staggering number of jars!  Rough count, 265 quarts and 450 pints of fruits, vegetables, meats, stews, sauces, etc.
I can't keep out of it.  I'll stand in the doorway and just admire.  Or sit on the stepstool and marvel.  I tweak and fiddle and rearrange.  It is truly - truly - a place of beauty.
And it's all due to my husband's hard work and ingenuity.
Posted by Patrice Lewis at 10:36 AM