I continue getting emails in response to my 1/24 column "The Answer is Simple: Don't Hire a Woman." Most are positive, a few people have issues, and all (well...most) are thoughtful.

But here's a fellow who disagreed vehemently. No biggee, he has every right to disagree. But unlike Kimberly (see below), this fellow put his money where his mouth is.

Whenever my favorite misogynist, Ron, sends me a condescending nasty-gram and offers to "tutor" me until I conform to his particular worldview (and I keep declining, to his intense frustration), I always invite him to either (a) stop reading my columns, or (b) to write a counterpoint and send it to WorldNetDaily.

So here's a guy named Eric who decided to take the intelligent path and write a counterpoint for WorldNetDaily. Good for him!

Of course I don't agree with him, but that's beside the point. He did the right thing and voiced his opinion. Good for you, Eric.

If I have time I'll assemble a rebuttal, but I'm getting slammed with responses from this week's column. One major project at a time, I guess.
Posted by Patrice Lewis at 6:40 AM 0 comments

Email ThisBlogThis!Share to TwitterShare to FacebookShare to Pinterest
Labels: snarks 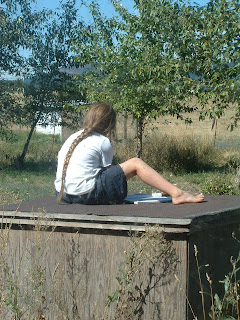 What fun! It worked. Here's another shot of younger daughter doing her schoolwork on top the dog house (one of the advantages of homeschooling - location isn't an issue).
Posted by Patrice Lewis at 3:52 PM 0 comments 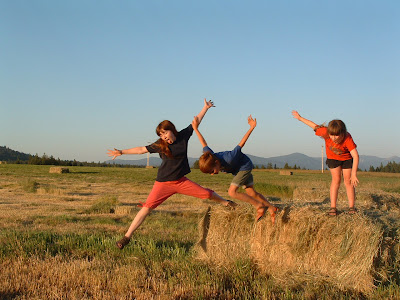 Okay, I'm still trying to figure out this whole blog concept. Luddite that I am, it takes me awhile to get the hang of things. I'm going to try posting a photo of my kids and nephew horsing around on hay bales last summer.
Posted by Patrice Lewis at 2:57 PM 0 comments

Okay, this is just plain cheery:

Maybe that's why we're swimming in the stuff from our beloved Matilda!
Posted by Patrice Lewis at 9:22 PM 0 comments

Snark of the Week

This has to be my all-time favorite email I've gotten so far. It came in response to last week's column, "The Answer is Simple - Don't Hire a Woman."

I've always heard it said when liberals can't clearly articulate their point, they descend into name-calling. Case in point:

I just wanted to say your a stupid twit! I think you need to keep your IGNORANT trap shut! How DARE you put all women in a box and say that we do not deserve equal pay because we have kids? Are you insane! You weak twit!!! Its people like you that are wrong with this world. You home school your kids, because you think they are too good for real school, and then you go a rant about women not deserving equal pay. Look you back woods country bumpkin, no one is interested in and the ann coulters of the world. I just was unfortunate enough to come across your ignorant rant, and thought you deserved to be called out on it!!!! Women all over the country are in the spot we are in because of ignorant whining WEAK women like you!! SHUT UP!

Here was my reply to Kimberly:

Thank you for your thoughtful email. I've tried very hard to overcome my residual urban rudeness in order to become a true backwoods country bumpkin, so your compliment is appreciated. To be included with the likes of best-selling author Ann Coulter is doubly kind.

If you could point out in my column where, precisely, I say that women with children (or women in general) do not deserve equal pay for equal work (in the true sense of the word), I would appreciate it. Yours was a very unique interpretation of the column, and I thank you for providing me with your insights.

What I really wanted to express to Kimberly was my merry laughter. Sorry, but when someone sends an email full of vitriol, grammatical errors, and misspellings in an attempt to discredit the idea of homeschooling...well, I'm inclined to laugh, not be insulted. This lady is a perfect ambassador for public schools. Absolutely perfect.

As far as my children being "too good" for "real school"....damn straight they are. They're MY kids, not your little victims for socialistic brainwashing. So sorry.
Posted by Patrice Lewis at 2:03 PM 2 comments

This morning I let our Jersey cow Matilda loose in the driveway to clean up some spilled hay. Matilda's water bucket was right under the kids' bedroom windows. Suddenly the cry went up from my ten-year-old daughter: "MOM! Your cow got COW SNOT all over my bedroom window!"

Ah, country living.
Posted by Patrice Lewis at 11:29 AM 2 comments

Letter to the Editor Rebuttal

It's always fun to get snarky letters from readers. Last weeks' column, "The Answer is Simple. Don't Hire a Woman" got its share of outrage from feminists apparently unable to read, because they misunderstood the entire premise.

Consider this Letter to the Editor:

Thanks for WND, but here's a suggestion: As a homeschooling mom, I wonder why you don't get someone more real than Patrice Lewis?

It's obvious that she and her family are on a farm, have a business and are probably much more blessed than the rest of us out here. She writes from her place of security in a manner that, to me, sometimes is a put-down toward those who don't live in her world, or share her attitude.

I, too, am a Christian woman, married, and I can tell you that I personally have suffered discrimination in the workplace, even having a man step in front of me and declare "You are taking a job away from a man with a family to support!" What are single women to live on when they have to support themselves, or children, too? Not everyone is married, or married with an affluent lifestyle.

It's real easy to be set up (blessed) like she is, and rant away against women in the workforce. In her most recent article, she takes a couple of catty slaps at women workers. Please be aware that not everyone appreciates this sort of thing, even Bible-believing people such as myself.

First and foremost, the lady (hereinafter referred to as “Jane” because I have to call her something) is quite right: we live on a farm and have a home business. And yes, I like to think we are much more blessed than those poor suckers forced to live in cities (smile).

What we are NOT blessed with, though, is money. This is, assumedly, why most women enter the workplace. So, if Jane is implying that we have an “affluent” lifestyle, I’d like to set the record straight.

My husband and I were two ex-professionals bringing in a combined income of over $70,000/year back in 1992 when we decided to chuck it all and move to the country. We adjusted from $70,000/year to about $15,000/year (sometimes less) in a matter of weeks. What fun!

And now, almost seventeen years later, what is our income? Well, after expenses (our woodcraft business has a lot of expenses), our profit is about $30,000/year. We support a family of four on approximately $30,000/year. I dunno, does that sound affluent to you?

How do we make it on this kind of income? So far, by NOT having me enter the formal workplace. I earn a little money through freelance writing, but NOT – repeat NOT – through my WorldNetDaily articles. For the record, I am not paid one thin dime by WND. Didja hear that? Not a dime.

Due to the downturn in the economy, my husband recently took on a second job. My “job” here at home is to make sure our limited funds are stretched as far as possible. This means the following:

• No meals out. Ever.
• Cooking from scratch. Pre-made meals from the grocery store are out.
• Buying in bulk. I usually get 150 lbs of flour at a time, for example. Beans, rice, etc – all in bulk.
• No new clothes. Ever. Well, with the exception of socks and underwear once a year.
• No entertainment frills. We don’t have cable TV (actually, no TV reception at all), we don’t go to movies (ever), we don’t attend concerts (except my husband and I try to see Riverdance when it comes through Spokane every three or four years), we don’t play golf or go to “fun” centers.
• We don’t buy electronics. Ever. No CD’s, no DVD’s (except when I find one at a thrift store), no iPhones or iPods or whatever the latest whiz-bang stuff is. We didn’t have cell phones until a few months ago when two separate friends upgraded their phones and gave us their older models.
• No new cars. We have an ancient farm truck we seldom take off the property, and one small used car for running around. No car payments, of course.
• We don’t use a dryer because propane is too expensive. I hang our clothes in front of the woodstove on a drying rack (in summer I use the clothesline).
• We heat with wood we cut ourselves because all other heating methods are wildly expensive. Remember that we live in north Idaho, a couple of hours’ drive from the Canadian border, so winters are cold. The average temperature in our house in the winter is about 60 degrees. When one of us gets chilly, we go stand in front of the woodstove for awhile and defrost.

These are some of the typical things we do to cut costs. Our biggest expenses are our catastrophic health insurance (which, naturally, we pay for ourselves since we’re self-employed) and taxes (astronomical). We are able to raise our own beef, milk products, most of our vegetables, and some of our fruit – all because it’s a hell of a lot cheaper than buying it at the grocery store.

So Jane – please don’t toss such accusations of being “affluent” around lightly because we live in the country. And unless and until you can demonstrate that your frugality beats ours, don’t assume I’m making light of women who work. Remember, there’s a reason most people live in cities. Rural areas are almost always very poor. Jobs are scarce and usually don’t pay more than minimum wage. Yet people make do out here because we believe raising our children in the country is better than raising them anywhere else.

Jane asks what single women, or women who are supporting a family, are supposed to live on? Well, the answer is simple: they live on their salaries, just as everyone else does. Am I against women in the workforce? Heck no (unless it jeopardizes their families, of course).

The premise of my column was NOT that women shouldn’t work. Do you honestly think I’m naïve enough to believe that? Women have always worked, and even Hillary admits that equal pay for equal work was put in place *forty years ago*. The premise of the column was that women don’t necessary work *equally hard* when compared to men. The premise was when government tries to legislate employers to the nth degree with legislation like HR 1388, there are unintended consequences. The unintended consequences are that people are more wary of hiring women, with good reason.

Women often must work. Great. But until you can verify and document that your work performance is *precisely* on par with a male counterpart, quit’cher bitchin’ that his salary may be higher than yours.

I received lots of emails from readers in response to the column, and quite a number were from male employers (probably because they knew they could vent safely with me) who testified how much harder men work on the job than women. I can’t verify their observations because I’m not in the office with these men, but when I get numerous unrelated men all reporting the exact same thing, I’m forced to conclude they may be onto something.
Posted by Patrice Lewis at 9:47 AM 2 comments