Here's an interesting article.  Apparently Bill Maher - whom I've never heard on TV because we don't get television reception - went on a "disgustingly filthy diatribe against “white men” and the type of women they like."  Gee, um, what kind of women can that be?

"He pompously posited," notes writer Patrick Dorinson, "that white men like these women saying, 'my theory is that these women represent something those men miss dearly: the traditional idiot housewife.'"

Oh, got it.  White men like traditional idiot housewives.

Apparently never at a loss for words, Mr. Dorinson came to the defense of us "idiot" housewives by visiting some hardworking women here in Idaho. 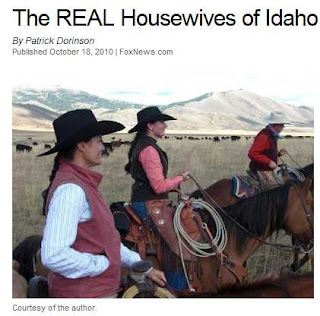 I thought this was a spiffy testimony to ALL the "idiot" housewives out there, the ones working their fannies off with their husbands to raise their kids, run a household, and make ends meet.

Let's hear it for Mr. Dorinson.
Posted by Patrice Lewis at 7:49 PM