The straw that broke the camel's back

We've been enjoying quite a warm Indian summer, with recent temps in the 80's (pant wheeze).  It's nice to be able to still use the clothes line since, of course, we don't use a clothes dryer.

With our busy schedule lately, I'd gotten behind on the laundry.  So the other day I decided to catch up on the washing.  Four loads later, all my clean damp clothes were hanging on the line.

I had one last item to hang - a flannel sheet.  I folded it in half length-wise and pinned the first corner on the line.  Suddenly I heard CRRAA-A-A-A-A-C-C-C-CKKKKK....

...and my entire clothesline collapsed on the ground!!  (I gave a most unlady-like screech at this.) 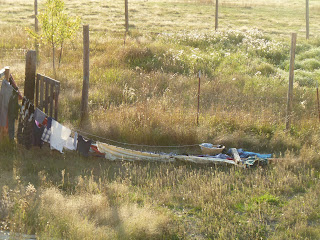 That flannel sheet was the straw that broke the camel's back.  One of the pressure-treated 4x4's holding up the clothes line just snapped at the base. 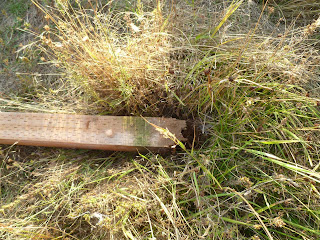 Well I can't really complain.  This clothesline has held up for six or seven years, under hundreds (maybe thousands) of loads of laundry.  I guess everything has a lifespan.

But it still meant I had four loads of wet laundry on the ground. 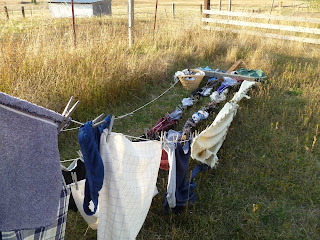 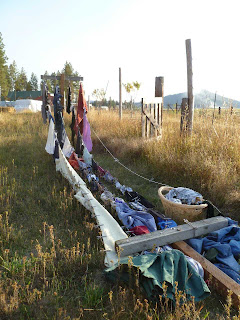 Nothing to do but gather it up.  I enlisted the aid of Older Daughter... 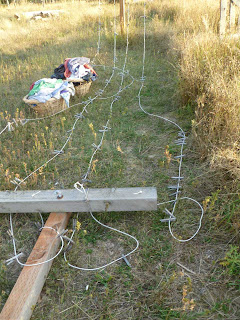 ...and we got everything in baskets.  Then we hauled them upstairs and hung them on the drying racks, which will now be in constant use until next spring, when Don says he'll install metal supports for the clothesline. 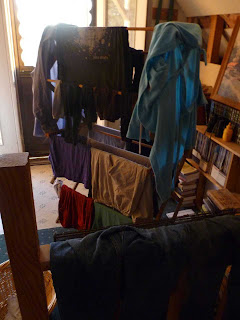 (By the way, I've been telling people "My dryer broke" and watching their expressions of intense sympathy.  They don't associate a broken dryer with a clothesline.)

Here's the "straw," draped over the stair banister to dry. 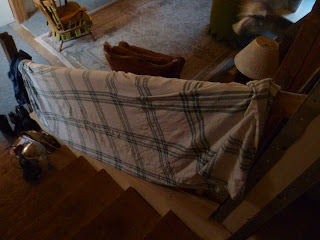 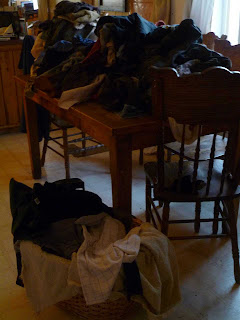