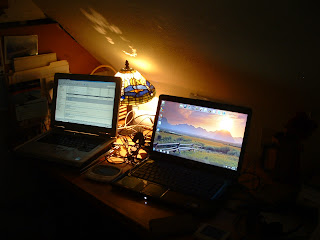 It's been three months since I got my new laptop and we still haven't transitioned over to it. It's been one thing after another. My external mouse didn't work and I needed to get a different cable. It wouldn't connect to the internet. It wouldn't accept my email program. Blah blah blah.

So I'm still working on my old laptop and just dealing with the 30-second-warning shutdowns and other weird quirks it's still prone to.

But this afternoon...oooh, that scared me. I was copying over some complicated Word files when Word froze up. No biggee, it's done that before, so I shifted over to something else and waited for it to unfreeze.  But then the  computer just...stopped. Turned off cold. I couldn't restart it.

This was Sunday afternoon, and for the first time in months I had forgotten to do a full-scale backup Sunday morning before leaving for church. I don't know why. I simply forgot. That meant it had been nearly two weeks since I'd done a full backup. I was in trouble.

Thankfully, after a few minutes of cooling down, my old laptop started up again and I immediately ran a backup. Don worked on the new computer somewhat this afternoon, but he's putting in insane hours on our business and didn't have time to get it figured out. So I'm still on my old laptop.

From now on, I'm doing bi-weekly full backups of my files, and daily backups on the thumb drive.

This is serious stuff, folks. For God's sake, back up your computer.
Posted by Patrice Lewis at 10:21 PM