It's always a big occasion when the vet comes.  Farm calls are expensive so we try to get as much done in one fell swoop as possible.

Today we needed to get Bang's shots for two heifers as well as Lutalyse shots for a yearling heifer and Matilda, our Jersey.

But before we could welcome the vet, we needed to get ready.  This included a couple of stout O-rings to hold ropes attached to thrashing animals... 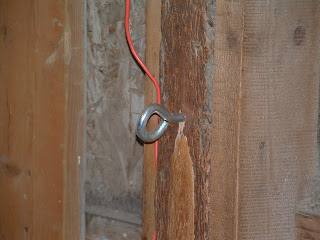 ...as well as adding a removable board above the barn gate to keep panicked animals from jumping the gate.  Don did these in the morning. 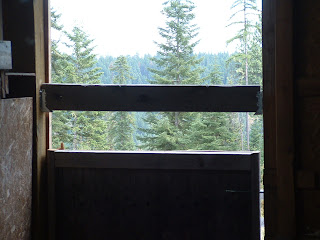 Then we borrowed some neighbor boys for extra "bodies" and started herding the cattle from the pasture into the corral.  Then we picked off the ones we didn't need and shooed the two calves into the barn.  Let's just say this was easier said than done. 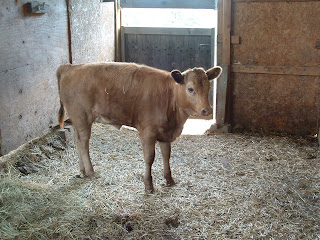 I managed to get a rope around her neck, to her immense disgust. 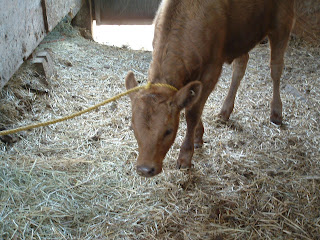 We needed to fit her with a halter.  Here's our basket of halters.  Surely one will fit? 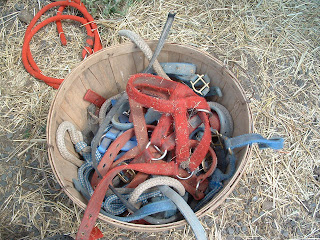 No such luck.  Don had to take the closest-fitting one into the shop... 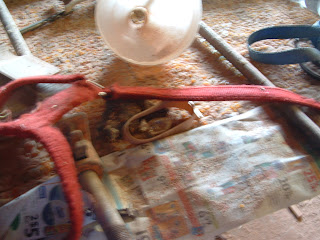 ...and burn three more holes in order to tighten it enough. 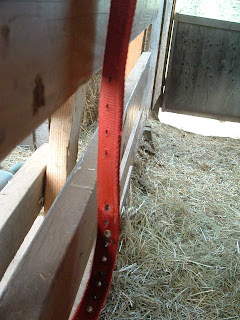 After a minor rodeo, I got the halter on the calf and attached a rope to it to make it easier to catch her.  As it turned out, the halter was still too big and came off her nose.  Oh well. 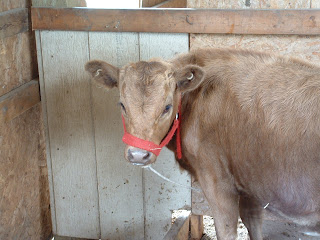 Next came Raven, now just a bit over a year old. 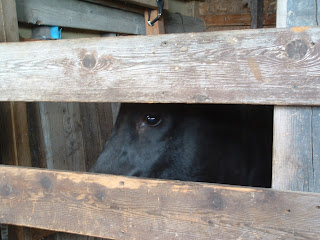 Surprisingly, she was a whole lot easier to handle than Smokey.  I fit her with a halter and rope without much trouble. 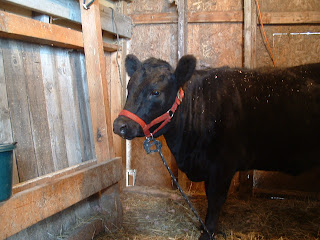 Make a note: always remember to wear mud boots, not my new thrift-store sneakers, into the barn. 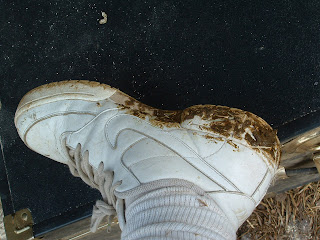 When the vet arrived, the first thing we did was give Matilda a shot of Lutalyse.  Lutalyse is an abortant.  After her ill-timed heat cycle last April, we needed to abort the fetus or we'd have a calf born in January, which would almost guarantee a dead calf in our harsh Idaho winters.  We prefer to breed our cows in late August or early September so the calves are born in late spring.  This will be easier to control once we build a bull pen for Gimli.

But meanwhile poor Matilda needed a shot of Lutalyse.  She was not amused. 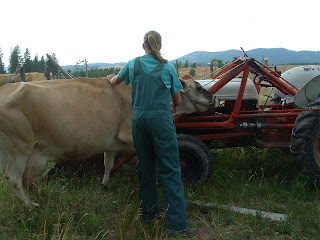 Then it was Raven's turn.  Raven also needed a shot of Lutalyse, not only because we don't want a calf born in winter, but also because she's still too young to have a calf.  We like to breed our heifers at about 15 months of age, so they'll be just about two years old when they have their first calf.  Once she aborts the fetus, she'll go into a heat cycle and Gimli can breed her.  This way her calf will be born next spring when she's about two years old.

But Raven needed more than a Lutalyse shot.  She also needed her Bang's shot, which also requires an ear tag, and ear tattoo, and a blood sample (because she's older than a year).  Here the vet is trying to draw blood.  Raven didn't cooperate, so after more rodeo antics the vet got the blood out of a neck vein. 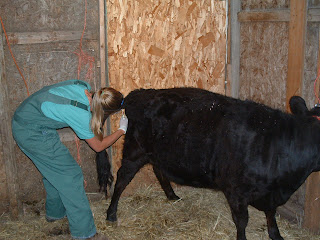 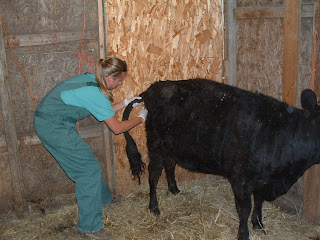 After this it was Smokey's turn.  All Smokey needed was a Bang's shot, her ear tattoo, and her ear clip.  Sorry, we didn't get any photos of this because it was, er, rather a lively event.

That's it for vet calls!  We should be good until next year.
Posted by Patrice Lewis at 11:12 PM