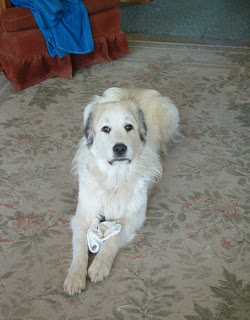 I know she's a purebred Great Pyrenees, and I know she's bred to defend her flock (us).  But frankly I've never seen her even get close to approaching an aggressive stance with anyone.  Until this morning.

Don was outside and coming out of the shop toward the house (which has a glass door, so she can see through it) with an armful of tankards.  For whatever reason (possibly the bundle of tankards) Lydia didn't recognize him.  When she saw him, she exploded into aggression and flung herself against the door, ready to attack.  Woke both kids out of a sound sleep, that's for sure!  Frankly if Don had been a stranger and the door hadn't been between them, I wouldn't have given him half a chance.

I was impressed.  This is what we wanted!  As soon as Lydia realized it was Don, she dissolved back into her goofy, friendly self.

Strangers aren't a problem.  We have loads of friends and visitors and she's fine with all of them, because we're fine with them and she gets her "vibes" from us.  But God help a stranger who tries anything aggressive against us, her flock.

Yay Lydia!  And thank you to the wonderful people responsible for bringing her to us!
Posted by Patrice Lewis at 2:02 PM