If you remember, a few days ago I posted a prayer request for a cyber-friend named Bill whose prostate cancer has metastasized up his spine into his shoulders and neck. You folks responded generously with prayers, jokes, anecdotes, funny stories, and other comments designed to lift his spirits.

As of this writing there are well over 100 comments left by you wonderful people. 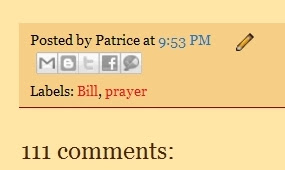 And oh my goodness, you have no idea how much this meant to him. He emailed me and said, "I saw all of those comments and was totally overwhelmed, and just cried and cried. They meant so much to me, and I don't know how, or where to say something. But, please let them know I am reading every one, though it is taking me some time."

Bill called last night and we talked for three hours. His language skills are fading and this scares the bejeebers out of him, as you can imagine. He often lost the simplest word, and he found it helpful when I was able to fill in a blank for him. The inability to communicate through language -- the most elemental skill for everyone -- is a source of deep frustration for him.

But he can still read, and he's read every single thing you've posted. Bill wanted me to pass on to everyone how much he appreciates your prayers and thoughts. Appreciate doesn't even begin to express the depths to which those comments helped him through some dark hours.

His battle is by no means over. Some readers were generous in sending links to possible treatments (and yes, every single thing that was sent to me, I immediately forwarded to him) but I fear it might be too late. "My brain has been injured by the pain medication, at least according to my docs, but it really scares me which is very embarrassing to me," he writes. "I'm about to start with yet ANOTHER radiating treatment, this time against a thing, a bump thing whose name I knew yesterday! that is growing in the left side of my neck. I am scared that I'm losing more language and words...I may cry on the phone with you. I hope that's OK. I'm a bit scared about it, and that is brand new to me."

Bill did indeed cry a bit on the phone, but frankly not as much as I would were I in his shoes. He gave me permission to post this update and he was fervent in his wish to thank each and every one of you.

By his own admission (especially since he lives alone), Bill needs to get into a nursing home, but he is hampered by the need to sell his condo in order to fund it. He does not want to go on the government dole in order to get into a care facility. I'm asking for additional prayers for him -- for peace of mind, and for a buyer for his condo so he can get the care he needs.

And thank you all for your prayers. I love my readers!
Posted by Patrice Lewis at 11:06 AM