Well as you've no doubt concluded, the world did not end yesterday despite the best predictions by some dingbat named Harold Camping.

This didn't stop a lot of people enjoying a good belly-laugh at the expense of the believers. "Hey, folks, I was raptured!!!" wrote one fellow. "Hope things aren't too bad down there now. Yeah, they've got the web up here, too. Turns out Heaven is whatever you want it to be like. It's awesome!"

Like many others, I was inclined to poke fun at the poor dupes who believed in Mr. Camping's prophecies until I read this article, which discusses the local fellow whose barn sign we passed recently on the way to the Moscow Renaissance Faire. 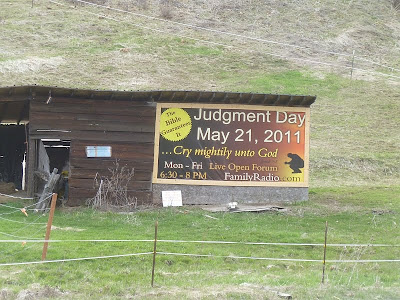 In reading the article, I was saddened by the degree to which Mr. Ivers was under the spell of the false prophet. He quit his job (in this economy?), sold most of his possessions, and used his savings to travel as far away as Europe, warning others that the end is near. "I’m more confident about the Lord’s return in a few hours than I am about the sun coming up tomorrow," Mr. Ivers is quoted as saying.

Beyond the obvious suggestion that folks like Mr. Ivers follow Jesus rather follow false prophets, I will try to find pity rather than humor in the situation. There are a lot of lives which now need to be rebuilt because of some crackpot who thought he knew more than our Savior.
Posted by Patrice Lewis at 1:40 PM