Reader Steve left a comment on the Bovine Basics post that required a longer answer than I could leave in the comments box, so I'm posting it here separately.

Steve wrote: After the calves are weaned, what does a relatively small operation do with all that milk? You can drink just so much, and eat just so much cheese and yogurt.

Steve, you’ll have less milk than you think. First of all, we don’t wean our calves – we let them do that naturally. Therefore it’s a gentle and gradual process, and the cow will adjust her milk output by what the calf demands. When the calf is older and needs less milk, the cow will produce less milk. That’s nature’s way. Ask any woman who has nursed her babies, and you’ll learn women operate exactly the same.

So when a cow is simultaneously nursing her calf as well as providing her owners with milk, she’ll adjust her output accordingly. You probably won’t be overwhelmed with too much excess milk.

The only time I’ve been overwhelmed with milk was when we first got Matilda. Since she came off a commercial dairy, she was producing commercial quantities of milk AND she had no calf on her to drink up the excess. I was forced into a rigid twice-a-day milking schedule (which wasn’t so bad once I got over the carpel tunnel issues in my hands). At her peak I was getting five gallons a day. A DAY. Every day. Yes, I was overwhelmed. 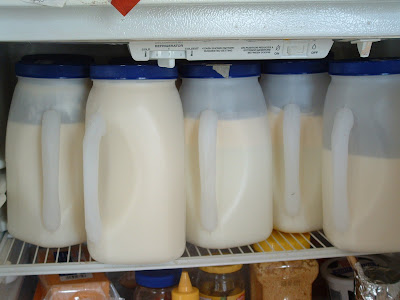 I made enormous quantities of cheese, yogurt, ice cream, cream cheese, butter… you name it, I made it. And I poured endless gallons of older milk down the drain. If we’d had pigs, I could have used all that extra milk on them, but we didn’t. Chickens like milk but of course drink relatively little.

Milk production operates on a bell curve, peaking about a month after a cow freshens (has a calf) and gradually tapering off. When our bull bred Matilda and as she got along in her pregnancy (a cow’s pregnancy lasts nine months, ten days), her milk output decreased until I finally eased away from milking a couple months before she was due.

When the calf was born, I braced myself for a flood of milk. But to my surprise it didn’t happen. Matilda immediately adjusted her output to the needs of her calf as well as what I took. It was great! We both (meaning, the calf and I) got what we needed without being overwhelmed. I probably got a gallon a day off of her, a respectable but not excessive amount.

One thing I did notice (and regret) was that I got a LOT less cream by keeping the calf on Matilda. Without a calf, cream made up about 45% of her milk volume. For whatever reason, the calf seems to be able to suck up most of that cream and I got very little as a result. My easy butter-making days were behind me for the time being.

One difference between Matilda and when I milked our Dexters is I never separated Matilda’s calves at night. We had changed our barn around a bit and eliminated the calf pen, so it just never happened. However by separating the calf at night and just milking in the morning, I think I would get a lot more cream.

Anyway, the bottom line is this. When the calf stays on the mother, you generally don’t get excess amounts of milk. That’s why commercial dairies remove the calves immediately, so the cows adjust their milk output to the needs of the dairy, not the needs of their calves.
Posted by Patrice Lewis at 10:01 AM