This is a piece my husband wrote about his uncle, a man he never met but who will be forever young –- and remembered.

Too many people have no idea what Memorial Day really is. It's become a day for barbecues, for beer, for picnics, for an extra day off work.

But that wasn't the original intent. Memorial Day was meant to remember those who died preserving our freedom. Below is a tribute to one man who did. This is also for all the others who paid the ultimate price for our liberties. Can we remember? Or will we now let those freedoms wither in our brave new world?
_____________________________________

I don't know how he died, really. No one does, since everyone who was with him died at more or less the same time.

I'll bet he was afraid. I would have been.

It must have been hell on earth – above earth to be exact. A booming, banging, grinding, shaking, shattering horror. Especially it must have been tough on him, hanging as he was below the belly of a crippled plane, a bubble of glass exposed to the flak and the fire from enemy aircraft.

A tasty and too visible target. 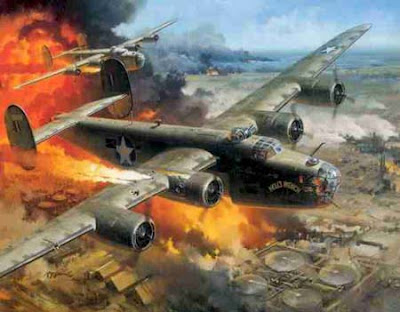 Fire Over Ploesti
by Roy Grinnell
His B-24 Liberator was powerful, true. But it was also lightly armored and easily damaged in combat. When damaged, the B-24 often lost the electrical power needed to rotate its gun turrets, and the gunners would have to hand-crank their turrets around, trying to follow the enemy planes.

Too slow. Too slow.

He was probably the youngest man on board. He was certainly the lowest-ranking member of the 10 men who made up the crew. That first day of August in 1943, he'd only been in the Army Air Corps for a year and a half. He'd only been overseas for six months. He was 19 years old. He came from a farming family that lived in a very small town in Kansas. He had one sister, two brothers and two very worried parents.

He was assigned to 98BG, a bomber group stationed out of Benghazi, Libya. His mission that day? In coordination with 178 bombers and 1,700 crew members, the 98BG was to attack and destroy the oil refineries at Ploesti, Romania. These facilities provided the Third Reich with one-third of its fuel. And the Nazis were very hungry for fuel in the waning days of 1943.

The oil refineries at Ploesti were protected with massive anti-aircraft batteries and hundreds of German and Romanian fighter planes. The distance traveled by the Allied bombers meant that no fighter protection could attend them. They were alone.

It was a tremendous undertaking. A gamble of men and machines desperately needed for the war effort. A 2,400-mile, 18-hour trip there and back again with only a half-hour of available time over the target.

They say he's buried at a cemetery near Liege, Belgium. Maybe he is, maybe he isn't. The records show that his B-24 was shot down over the refinery, but that it happened before the crew could disgorge the plane's 8,000-pound payload of high explosives. And the B-24 Liberator was well-known for burning merrily when it crashed.

But I'm sure his name is on one of the white crosses standing in formation at the lovingly well-tended cemetery. 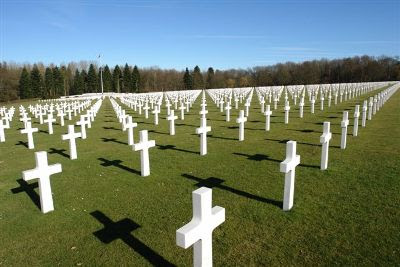 His parents back in Kansas received the medals that he was awarded posthumously at a ceremony, probably one of many such ceremonies on that same day. The medals were: a Distinguished Flying Cross, a Purple Heart and the Air Medal with three oak leaf clusters. 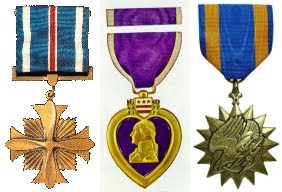 Both his brothers eventually went to war as well. One went as another tail gunner, the other as a pilot. His younger sister stayed home, grieving for the older brother she would never see again on this side.

Eventually she married my father.

The parents, the brothers and the sister passed away some time ago. There is now no one that can tell me anything more about Donald Phillip Sowers – sergeant, United States Army Air Corps. The uncle I never knew and whose name I share.

Donald Philip Sowers never woke to the face of his bride on the day after his wedding. He never paced the floor late at night singing softly to an infant daughter who just couldn't sleep. He never got to hold his child's hand the last time she needed, or wanted, help to cross a street. He never felt the aches and pains of a long life, well lived.

But I will remember him and so will my children. If you've taken the time to read this, tip a glass in his name and remember him – and all the other lost brothers and sisters as well.

Donald Philip Sowers died fighting the greatest evil of our time. A young man of 19 who will never grow old.

Have a happy, safe, and thoughtful Memorial Day.
Posted by Patrice Lewis at 8:45 AM