I have a pet peeve. I hate the word “hoarding.”

Let me be more specific: I hate the term “hoarding” as applied toward Preppers.

I'm sure you'll agree that none of these implications are true. We who are preparing are, by definition, doing so during "easy" times. Right now food and other resources are abundant and relatively cheap. Virtually everyone can do something to prepare for future shortages. Most just choose not to. And make no mistake, lack of preparedness is, for most people in this country, a choice.

Hoarding is an ugly word and, I believe, profoundly untrue as it applies toward those who are concerned enough about the current and future economic situation in our country that we are laying in supplies of food and other resources. 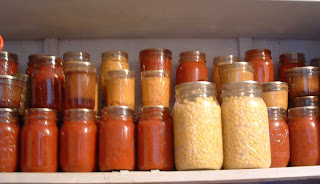 How many people, when they hear a rumor about a shortage of sugar, will go stock up on hundreds of pounds of sugar to the point that rumor becomes truth? I clearly remember such an incident from my childhood. Also toilet paper. Also coffee. Also (my husband remembers this from his early boyhood) vacuum tubes. (As in, for televisions.)

But Preppers have no need to engage in a run on sugar or toilet paper or any other resource…because they already have adequate stores, thank you. This is because they had the foresight to stock up on necessities long before anyone ever dreamed a shortage could happen. This is because they believe only by having adequate stores of resources can they avoid becoming one of the stampeding crowd, one of the desperate horde, one of the victims of violence because someone else wants the same bag of sugar or package of toilet paper.

It’s well documented that a resource doesn’t become “valuable” until it becomes scarce. How much does a pound of salt cost at the grocery store? $0.59? Imagine if salt was suddenly scarce. How much would that pound cost?

It’s a simple matter of supply and demand. By definition, Preppers are people who accumulate – “hoard,” if you will – resources when supplies are high and demand (and prices) are low.

What makes me furious is the reaction and attitude toward Preppers when these resources suddenly becomes scarce. How easy is it to blame someone who has a room full of toilet paper when there is none to be had at the store? Why won’t they share, dammit? It doesn’t matter that the Preppers bought TP when it was $5 for a 24-pack and no one else wanted it. I WANT SOME TOILET PAPER. IT’S NOT FAIR (kicking heels) THAT YOU WON’T GIVE ME SOME!!!

Why? Why isn't it FAIR? What's "fair" about trying to force me to share my resources with you when all you did was pooh-pooh my "hoarding" when you could have been doing the same thing? Can you see the childishness of this reaction?

Most Preppers are not rich. God knows we're not. We’re just ordinary folks who see the gathering storm clouds on the horizon and are doing what we can to provide for our families if hard times hit. Naturally we’re viewed with condescending tolerance and not a little laughter at our expense…until TSHTF.

Suddenly that tolerance and humor becomes frustration, outrage, and even violence if Preppers don’t share their store of resources. When asked to explain the logic behind the outrage, the Unprepared generally fall back upon the indignant accusation that the Preppers are “hoarding.”

I see. So why didn’t the Unprepared “hoard” when they, too, had the chance?

What follows is a stuttering list of excuses. Lack of money. Lack of storage. Lack of interest. Lack of foresight. Lack lack lack.

What it translates to, folks, is denial. The Unprepared refuse to become Preppers because they simply cannot, or will not, grasp the idea that anything could interrupt their comfortable lives. Even those who have lived through hardship and deprivation – the aftermath of hurricanes, violent urban riots, war, acts of terrorism – cannot extrapolate into the future and see that deprivation can happen again. And again and again and again. At any time. Totally without warning.

So why do, say, homeowners in Florida not keep plywood, food, water, duct tape, and other resources in their garage for the inevitable hurricane? Denial. Maybe they don’t think bad things could ever happen to them. (It always happens to someone else, right?) Maybe they think someone else will protect them. (The government. Natch.) Maybe they think God will look after them. (It was J.G. Holland who said, “God gives every bird its food but does not throw it into the nest.”) Whatever their excuse, the fact remains that when a tragedy strikes, the Unprepared are caught with their drawers down – and then they’re angry at those who aren’t. The Unprepared line up at Home Depot for plywood and then get angry with their neighbors who knew enough to keep plywood in the garage between hurricanes. Oh, and food and water too.

This isn’t to imply Preppers can’t be affected by tragedies. Of course they can. I know someone with a serious interest in preparedness whose wife died of cancer. He wasn’t “prepared” for that. The rain falls on the just and the unjust, and as with anyone affected by a loss, all he could do was pick himself up, grieve, and get on with life.

But Preppers are doing their best to mitigate disaster. It’s all any of us can do.

No one objects to Preppers “hoarding” food during easy times. We’re viewed with tolerant amusement at our hobby of bucketing beans and rice, at canning every vegetable that comes our way, at buying a few extra tubes of toothpaste. Folks usually view us as a little quirky but otherwise harmless. After all, we’re spending our own money and not asking anyone else to provide those resources for us.

It’s only post-TSHTF that our efforts are suddenly viewed with hostility as “hoarding” because, gee whiz, we’re reluctant to distribute our “hoard” to every grasshopper who demands a share.

“The time to gather emergency supplies,” as a reader pointed out, “is when there isn't an emergency. There will be more supplies available for everybody that way.” In fact, who knows? If there’s enough of a demand for resources, the supplies may ramp up their production to meet the demand, thus assuring plenty of resources for everyone. (Until the bleep hits the fan, of course.)

Hope this clears up any misconception on “hoarding.”
Posted by Patrice Lewis at 10:57 AM