Finding dignity on your hands and knees 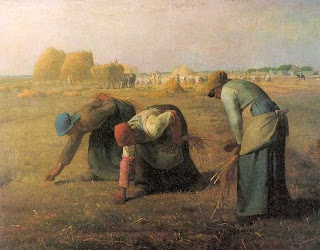 I’m going to get hammered for this, but I feel it’s something that needs to be said.

We need to stop looking to the government to bail us out, either individually or collectively, when times get tough. Doing so may save us in the short-term, but in the long-term we’re sacrificing our national and personal independence.

What do I mean by this?

I mean that a refusal to depend on one’s self and one’s circle of support (friends, family, etc.) and instead depending on government largess when times are tough inexorably leads down the road toward socialism and the forced redistribution of wealth and assets. Here’s a harsh but true column (the truth is often harsh) that discusses this further.

At a time when the difference between dependence and independence was literally life and death – such as when the early Pilgrims were struggling to stay alive in a harsh new land – the settlers tried the warm fuzzy strategy of socialism and learned it was a colossal flop that led towards starvation. (Here’s an essay on the subject.) The settlers only succeeded when it was mandated that it was every man for himself. Personal responsibility and private property were embraced, and Plymouth Colony subsequently flourished.

But now, when an unwillingness to work is rewarded and subsidized by a bloated and overspent government, socialism works just fine… until, as Margaret Thatcher so bitingly noted, we run out of other peoples’ money. And when that time comes, we will be left with millions of people who don’t know how to work. That time is rapidly approaching, if not already here.

Over the years this has become a serious annoyance to me – that people are unwilling to work, dammit.

We know some folks who, like so many others in this economy, lost their jobs. Naturally they’ve been diligently searching for new employment commensurate with their impressive experience and credentials. But in the meantime, to keep body and soul together, they’re pulling weeds.

Yes really. For several months, all throughout the summer, these people (in their 50’s) are on their hands and knees in other peoples’ yards and gardens, pulling weeds. “Where’s their dignity?” you might ask. I’ll tell you where their dignity is: it’s in their hands and knees, pulling weeds. These folks aren’t asking for a handout from the government. They are doing whatever it takes to keep aloft in a rotten economy. And I have far more respect for them because they’re willing to do “lowly” work. God bless them.

I know other unemployed people who would be horrified at the thought. Lower myself to pull weeds? Me? With my education, job skills, and experience? I’d rather collect government money and diligently search for a job that really reflects who I am.

Look, I know unemployment benefits have saved a lot of peoples’ fannies. But it has also led (for many, not all) toward a careless attitude about employment. I know a man who dillied and dallied and went fishing and watched television for a year and a half while collecting unemployment and half-heartedly looking for a job. You would never catch him pulling weeds. Ever. It was only when his benefits were about to expire that he finally rallied himself and decided to really look for a job. Amazingly, even in this rural area rife with high unemployment, he found full-time work within a couple of weeks. Gee, go figure.

What most people don’t realize is the dangerous trend heralded by this government safety net. The dreaded condition of socialism doesn’t come in one blinding flash of lightening. No, it comes through creeping apathy, from a preference to go fishing rather than weed someone’s garden because, after all, there’s a safety net (unemployment benefits) to catch them. See my point? Government safety nets are fine and good for immediate help, but they also make people careless and indifferent. Creep creep.

My husband and I have been self-employed for seventeen years. We have no safety net beyond what we ourselves install. If our home business fails or reaches the point where it can no longer support us, we have no choice but to seek other sources of income. We cannot look to the government to help us because it won’t.

And therein, I believe, is the genesis of my passion on this topic. When you cannot look to the government to save your fanny, you have no choice but to sharpen your own skills and utilize your own resources in order to save your fanny. And – here’s a thought – most of the time your fanny gets saved through your own efforts. Gee, go figure.

Please don’t misinterpret this to mean I find no compassion for those who cannot work. There is a world of different between cannot and will not. That’s why the classic verse of 2 Thessalonians 3:10 was phrased the way it was: “If a man will not work, he shall not eat.” It doesn’t say cannot work, it says will not. (Here are other Bible verses that support a work ethic.)

Like the early Pilgrims who discovered that starvation was an excellent motivator, the only thing that will save this nation is if millions of people who are waiting for the government to save them will get off their butts and start weeding gardens. Or waiting tables. Or scrubbing toilets. Or mopping floors. Or delivering pizzas. Or doing whatever it takes to be able to lift their chins with dignity and say, “I refuse to let someone else save my fanny.”

Okay, I’ll get off my soapbox now.
Posted by Patrice Lewis at 8:31 AM