Canning pepperoni (well why not?)

I confess, I'm one of those bothersome types of canners who will look at virtually any food product and ask myself, "Can I put that in a jar?"

This happened recently with pepperoni while I was making pizzas for dinner. As I removed pepperoni from the bulk bag, I wondered - "Can this be canned?"

My friend Enola Gay had already done so (no surprise there!) so I decided to give it a go. Half the fun of canning, you see, is to try new things and see if they work out.

By now you're probably asking yourself, why the heck would I want to can pepperoni?

It's because I can make from scratch everything else on a pizza -- the dough from our own wheat, the sauce from our own tomatoes, the mozzarella cheese from our own cows -- but what's a good pizza without pepperoni? It would be nice to have some canned up for a "bleep" situation when a hot pepperoni pizza could lift everyone's spirits. Anyway, that's my story and I'm stickin' to it.

So I started with five pounds of pepperoni purchased at the wholesale grocers. 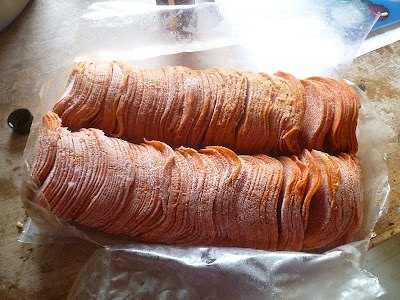 I stuffed as much as I could into wide-mouth pint jars. This particular pepperoni is large, so next time I think I'd use pepperoni with a smaller cut. As it was, I had to kind of squish the pieces into the jars. I could fit half a pound into each jar. I did NOT add water to the jars -- I dry-packed them. 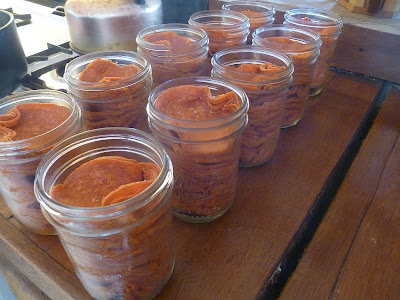 The default time for canning pints of meat is 75 minutes, 10 lbs. pressure. 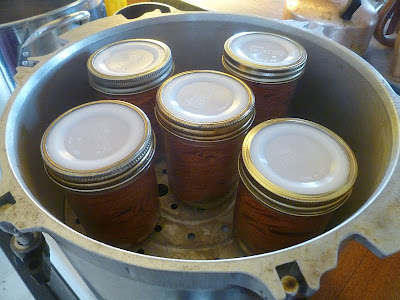 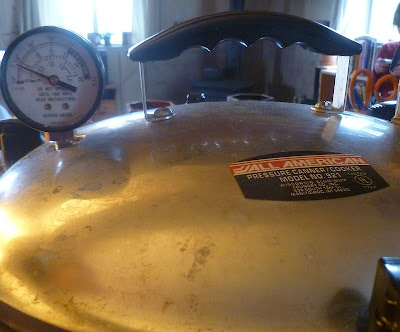 When I removed the jars after processing, it was too dark in the kitchen to take good photos (this was last night) but the results didn't look promising. The contents looked black and greasy. Yuck.

This morning, after the jars had cooled, it still looked... well, less than appetizing. 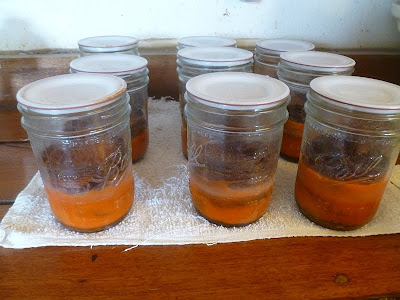 The pepperoni had shrunk down and released a lot of its fat. 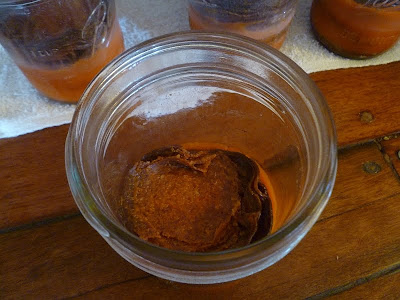 When I pulled it out of the jar, it was very greasy. 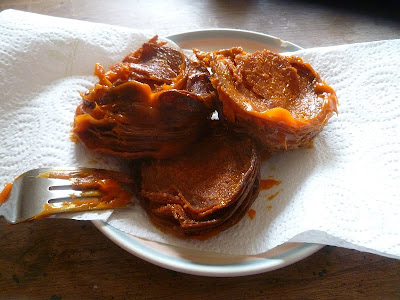 But when you think about it, there's no more grease in the jar than was originally in the pepperoni itself. Conclusion: I think pried apart and put on pizza, it would be fine. However it would NOT go well on sandwiches. (Don sometimes likes to make pepperoni sandwiches.)

All in all I would do this again, and probably will. I like having odd and handy things canned up in my pantry, and I think you'll agree pepperoni falls into that category.
Posted by Patrice Lewis at 1:33 PM