At least, someone in the mainstream media who isn't afraid to state the obvious!

Here's a piece by CNN contributor LZ Granderson entitled Parents, Don't Dress Your Girls Like Tramps. Major kudos to Mr. Granderson for having the cajones to not mince words.

As the mother of daughters, we (meaning, our girls and I) are constantly amazed by the trash that passes for "fashion." I suppose if you consider it fashionable to dress girls like skanks, then that would explain why underwear is now worn as clothing. Go figure.

A few days ago someone (I'm not sure who -- it was delivered third-hand) donated a bag of clothing for my soon-to-be-thirteen-year-old Younger Daughter. Let me re-emphasize: thirteen. I don't know who thought the fashions would be acceptable in our family, but I'll give the mysterious donor the benefit of the doubt and assume they're just in the "fashionable" club.

Ambercrombie & Fitch is a clothing manufacturer infamous for selling thong underwear for six-year-olds. While I'm not positive this shirt advertises the company, there's no possible way I'm allowing my daughter to take that chance. 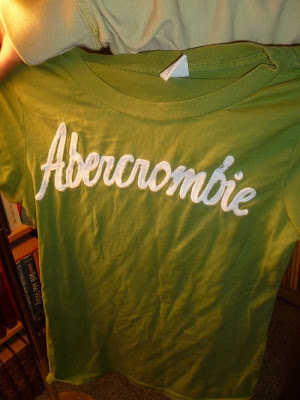 And this? Do you honestly think I'd allow my young teen to wear this in public? NOT!! 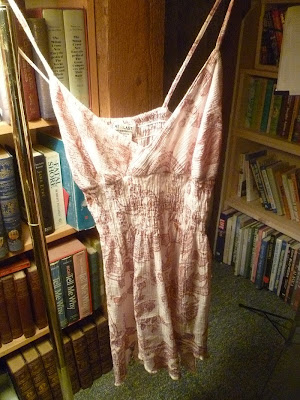 Who's at fault for this kind of trash being on the market? "No successful retailer would consider introducing an item like a padded bikini top for kindergarteners if they didn't think people would buy it," notes Mr. Granderson. "If they didn't think parents would buy it, which begs the question: What in the hell is wrong with us?...It's easy to blast companies for introducing the sexy wear, but our ire really should be directed at the parents who think low rise jeans for a second grader is cute. They are the ones who are spending the money to fuel this budding trend. They are the ones who are suppose to decide what's appropriate for their young children to wear, not executives looking to brew up controversy or turn a profit."

I couldn't agree more.
Posted by Patrice Lewis at 9:02 PM