I'll repeat my warning I put up every time we butcher: DO NOT READ THIS POST if you are vegetarian or have a squeamish stomach. This post shows pictures of our heifer being butchered. I don't want anyone whining that they weren't adequately warned about the graphic nature of these photos.

Okay. That said, today was the sad day we had our injured heifer Pearly butchered.

Normally I don't get sentimental over our livestock. When it's time to butcher a steer, it's no big deal. But this is the first time we've had an injury on the farm so severe that we couldn't let the animal live.

If you recall, Pearly cut her ankle on a sheet of roofing tin I carelessly left on the ground. The cut was so deep it severed her Achilles tendon. We've had her in the barn for the last week since she could barely hop around on three legs. Fortunately the mobile butchers were scheduled to be in our neighborhood today, so Pearly didn't have to suffer too long. 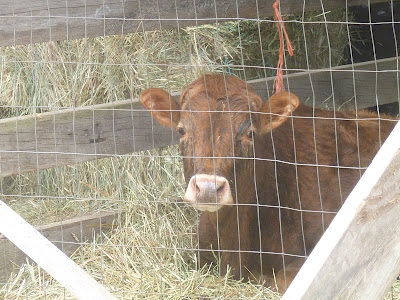 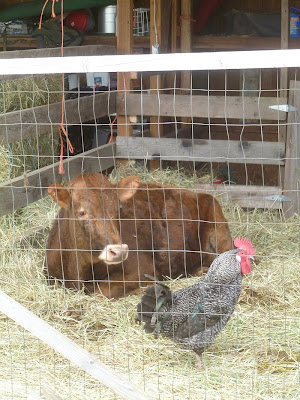 My normal morning routine (for the cow/calf pairs currently residing in the driveway) is to put their hay in a couple of wheelbarrows, then let the animals out one by one. Since I didn't want them in the vicinity when Pearly was butchered, this time I let the animals out, but didn't put out any hay. They milled about in confusion. 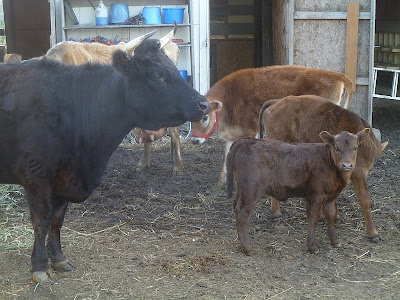 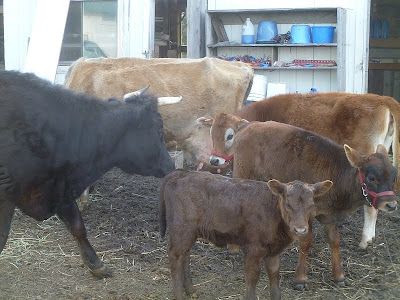 I wanted all the animals down in the pasture, out of sight of the barn. We haven't put the animals in the pasture yet this year because the grass isn't tall enough and we don't want them eating it down too quickly. But this was a special occasion. Once I put some hay in a wheelbarrow, they followed me readily enough. 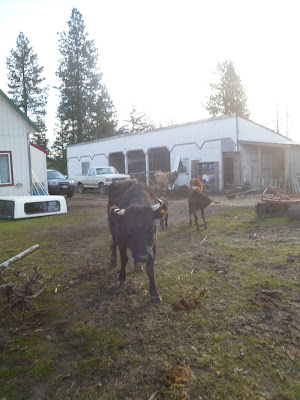 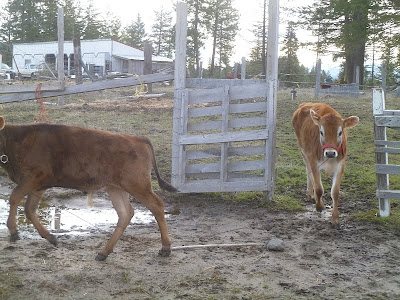 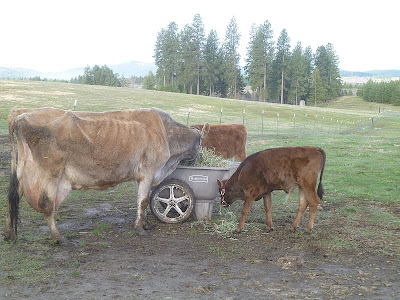 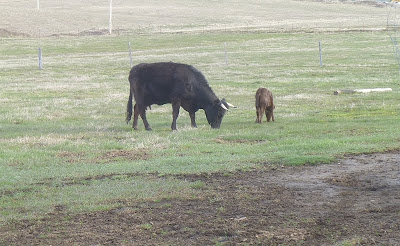 A couple hours later, Potlatch Pack showed up. The business is run by Mel and Chance, an uncle/nephew team. 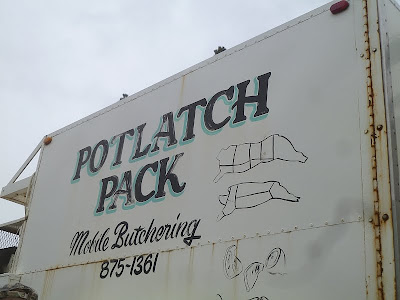 The first thing to do, of course, is the actual killing. Notice the quiet and respectful stance Chance takes as he approaches the animal. He keeps his rifle tucked out of sight until just before he aims. 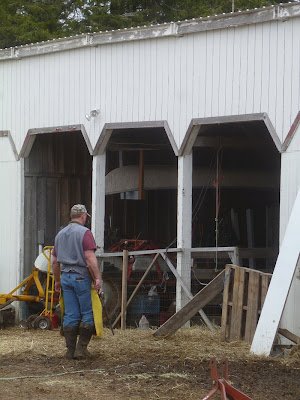 These guys are experts. One shot -- that's it. Very quick, very humane. 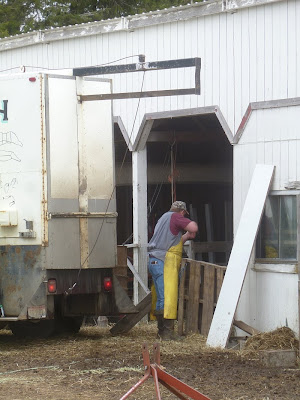 They dragged her out of the barn and hoisted her up to drain the blood. 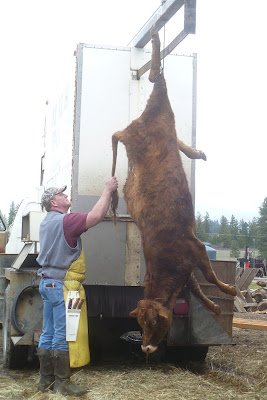 The men wear waterproof aprons and holsters with knives. They constantly sharpen the knives on a sharpener which also hangs from their belt. 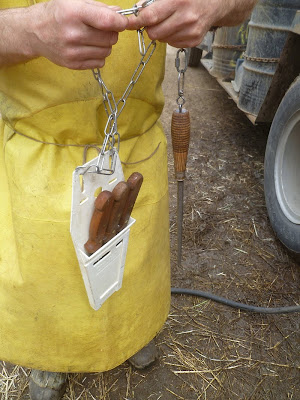 Skinning. In their capable hands, this procedure takes only ten or fifteen minutes. 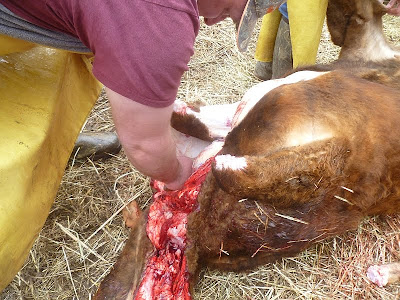 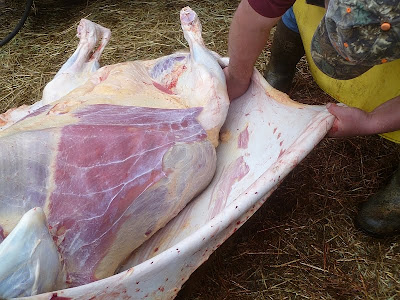 They use a modified chain saw to cut the carcass in half. 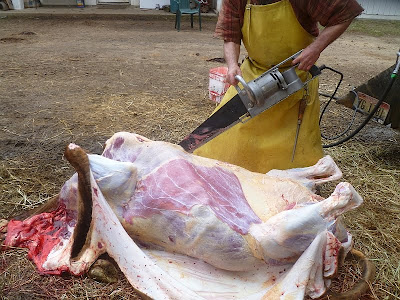 The men are constantly hosing themselves down, as well as their tools and the carcass. They keep everything very clean. 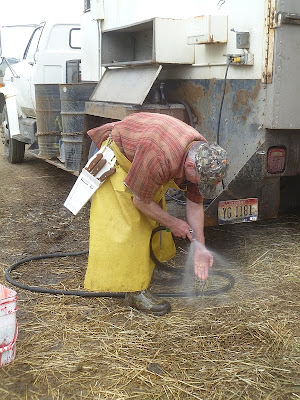 See that white sack? Sadly, it was as we suspected -- Pearly was quite pregnant. That's the fetus. 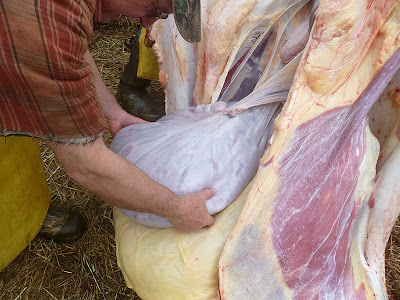 Hanging the carcass to finish skinning and finish cutting in half. 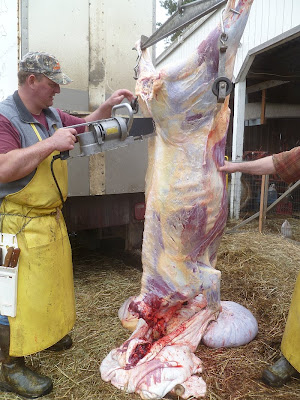 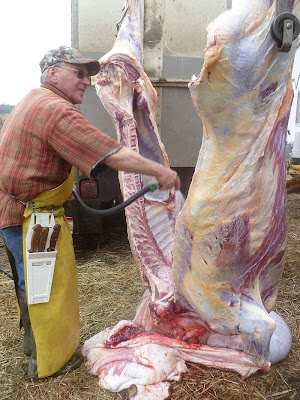 Into the truck, along with the carcasses from a neighbor's farm. 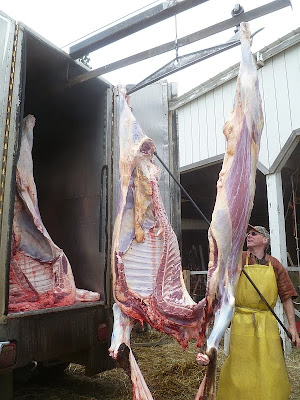 The men have barrels for putting unwanted organs and other parts, but they always empty the stomach because otherwise it would take up too much room. This is the half-digested hay from the stomach. 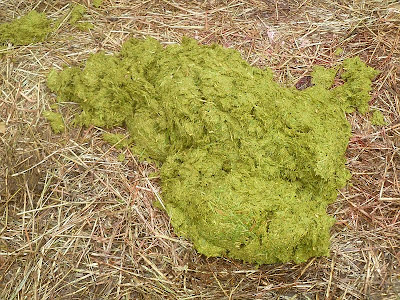 But how far along was the fetus? 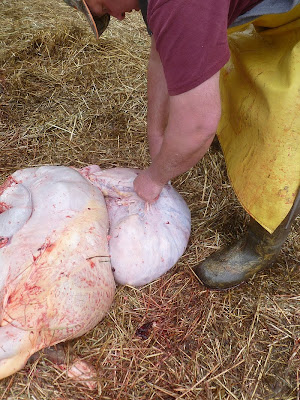 The men have seen fetuses in endless stages of development. A cow's gestation is nine months and ten days. They estimated this one to be 7 1/2 months along. It was a girl. Notice the pearly-white hooves, just like her mom had when she was born. 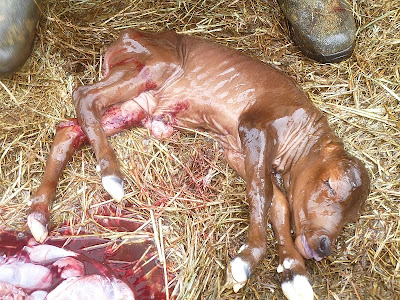 In the end, the men buttoned up their equipment and left me with so little to clean up that I was done in two minutes. These guys are consummate professionals and it's no wonder their reputation as experts is widespread in this region. They took a sad situation and did the job quickly and cleanly. We're grateful they're here to do it. 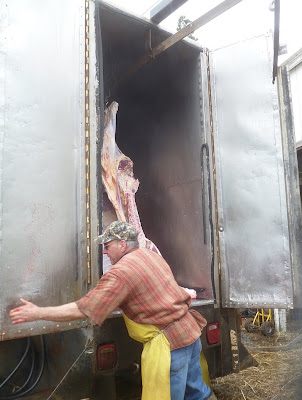 I sometimes say this blog is to share with you the good, the bad, and the ugly about rural living. Today was a little bit of all three. The good is we will soon have meat in our freezer. The bad is we lost an otherwise healthy heifer. And the ugly is we lost an unborn calf as well. Such is life in the country.
Posted by Patrice Lewis at 9:59 PM