I spoke to the vet this morning and told her about Pearly's injury. It didn't take a rocket scientist to confirm my fears: Pearly sliced her tendon. You've probably heard the term hamstrung? It's a crippling injury that, in livestock at least, is a death sentence. 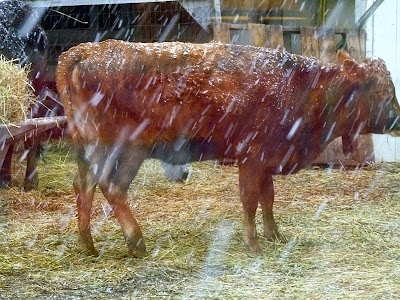 You can see how she's pretty much on three legs. (We put her back in the barn shortly after I took this photo.) Without surgery and therapy, she'll stay on three legs. People can recover from being accidentally hamstrung -- cattle cannot.

And the pisser is, it's my fault. I saw that piece of sheet metal lying on the ground and it passed through my mind that I ought to pick it up before someone got injured... and then I didn't follow through.

So I called Potlatch Pack, the mobile butchers whose humane and efficient slaughter is legend in this area, and made an appointment for Monday. It breaks my heart to put a heifer in the freezer, especially one that is healthy and strong, but I guess it taught me a harsh lesson: picked up the damned hazards when I see them rather than putting it off.

The silver lining is we'll have some meat again. We're out at the moment, so it will be nice to have a full freezer.

For my vegetarian readers, expect a somewhat graphic post early next week. I'll put up sufficient warnings that no one is caught unawares.
Posted by Patrice Lewis at 4:51 PM