Well after all that fussing and worrying, Matilda had her calf without us even seeing the birth. Grrrr. 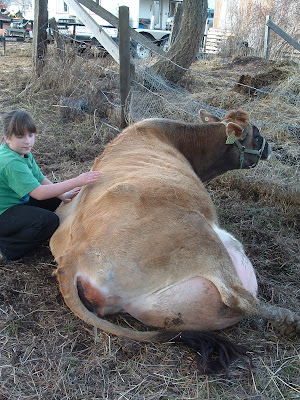 I mean, really. I had just checked on her around 2 pm (Sunday). She was lying on the ground, chewing her cud, no obvious contractions or distress. Not fifteen minutes later, Older Daughter comes tearing into the house, shouting "The calf is here!" Honestly - couldn't she at least wait for us to get there? How inconsiderate. 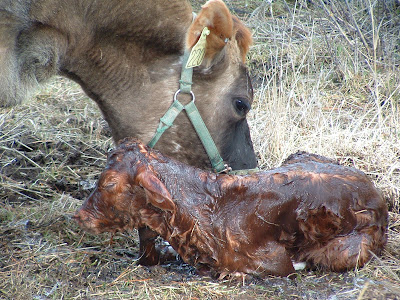 So at least we saw the new calf moments after she was born. Yes, she. It's a little heifer with hooves as white as snow. Younger Daughter had planned to name her Bessie, but as we watched her struggle to her feet for the first time, someone said, "Look at those hooves! They're pearly white!" We decided that was a splendid name - Pearly...though the hooves are now reddish brown, just like the rest of her. She looks so much like Gimli (our red Dexter bull) that it's astounding she came out of a Jersey cow.

The birth turned into a neighborhood party. In great excitement, the girls called all the neighbors and about twenty showed up, and most of the kids stayed to enjoy a spontaneous game of Obstacle Course in the driveway. What a day. 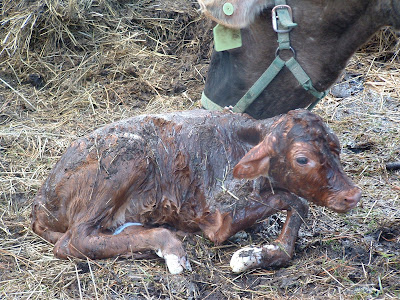 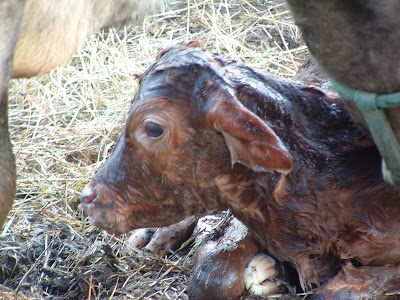 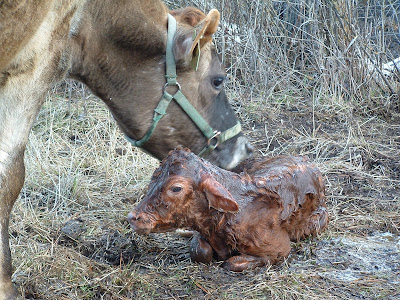 Trying to stand and making hash of it. 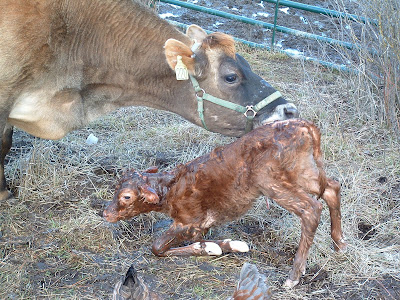 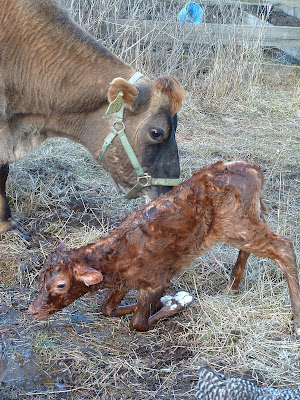 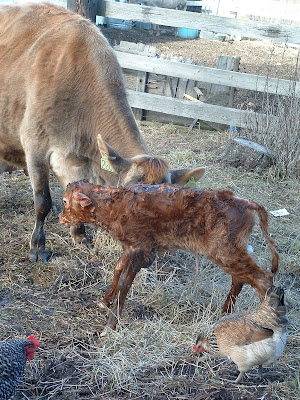 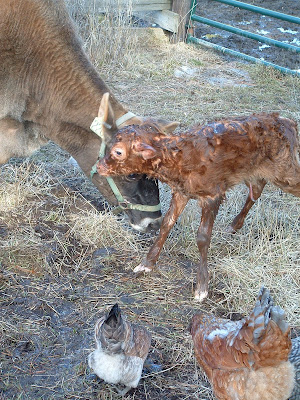 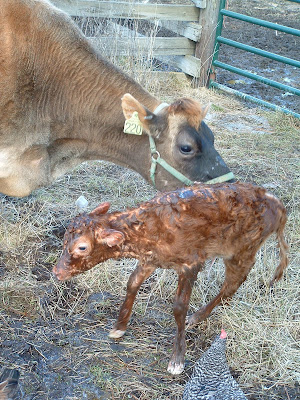 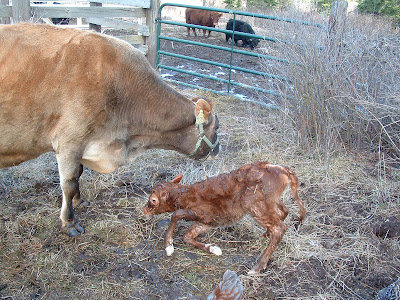 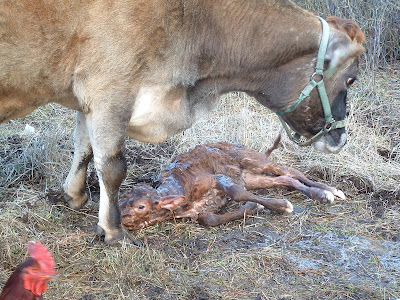 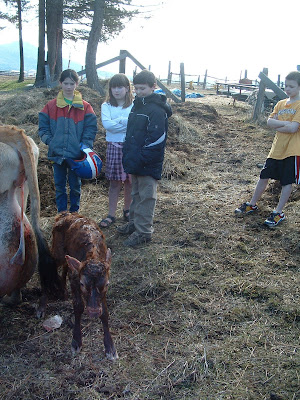 Is that udder massive or what? 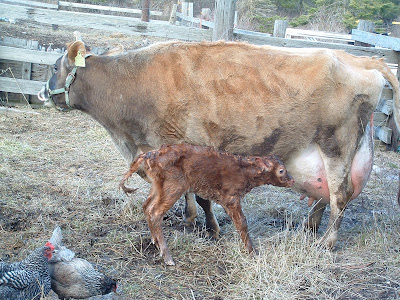 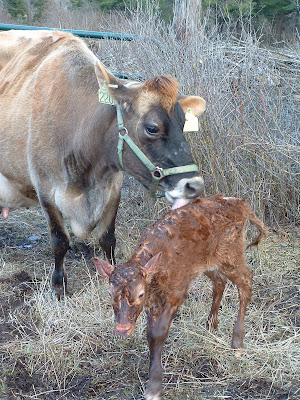 The other cows knew something was up, but weren't quite sure what. The red bull, Gimli, is the calf's father - and boy does she look like him! 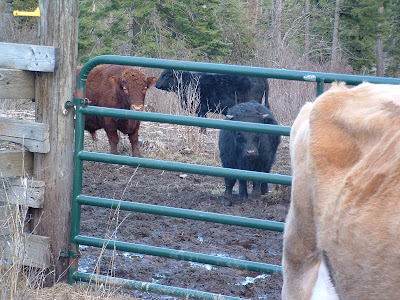 We had quite the audience since everyone in the neighborhood had been waiting for the Big Event... 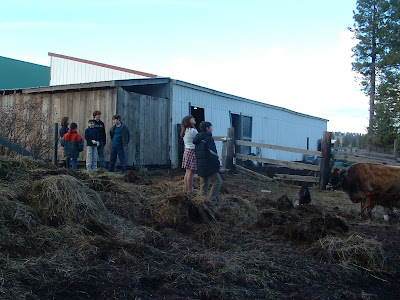 Searching, but not quite sure for what... 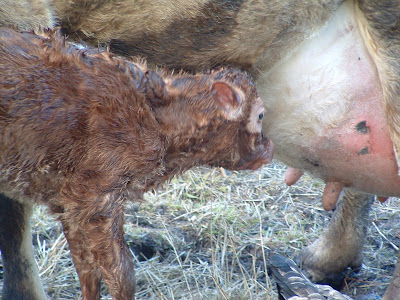 Since she came off a commercial dairy and was never allowed to keep a calf, this little girl will be special for Matilda. I love the low, cozy "moo" cows give at this time - a sound only heard with a new calf. (The rest of the time they bellow like something out of Jurassic Park - in fact, that's how I half-jokingly refer to our place: Jurassic Farm.) 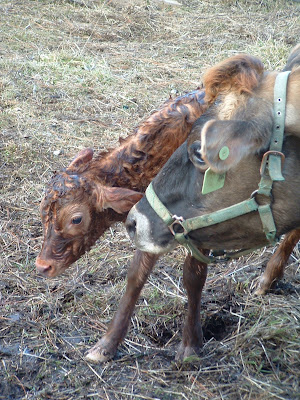 Our Dexter matron Jet wonders what all the commotion is about. 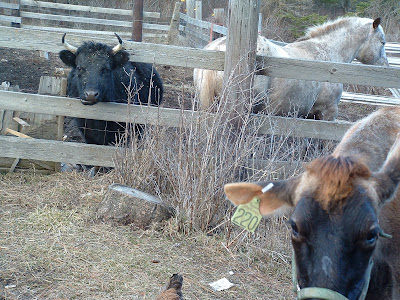 The chickens loved all the goopy mess left behind... 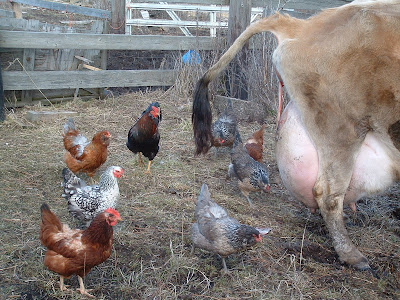 ...and curious, they hovered and clucked around the newcomer as well. 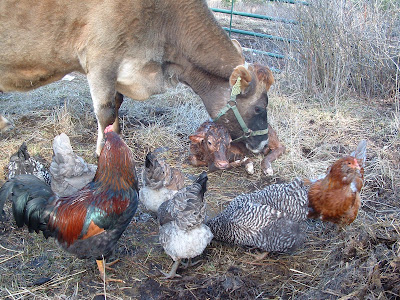 Our neighbor Ethan can claim to be the first to pet Pearly as she stumbled toward him, still wet. 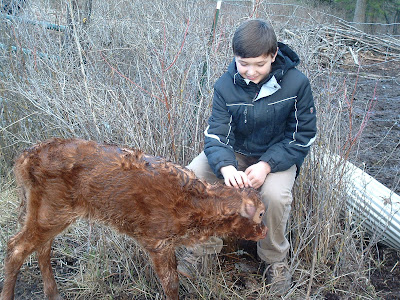 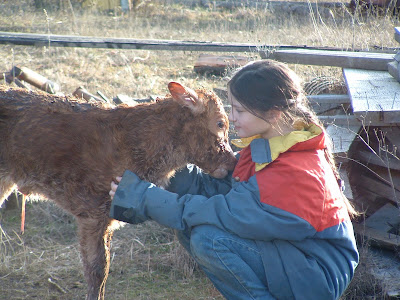 As you can imagine, Matilda was pretty thirsty! 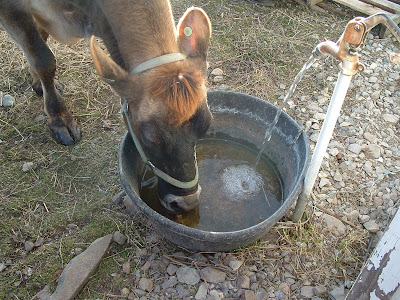 Nursing is a trick because Matilda's bag hangs so low. Those who know cows know that Matilda has a poor udder attachment, but we have to work with what we have. Matilda wasn't bred for superb udder attachment, merely milk production. 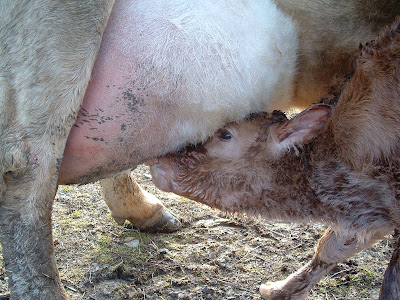 Younger Daughter fell in love with Pearly right away and wants to be the one to lead-train her. 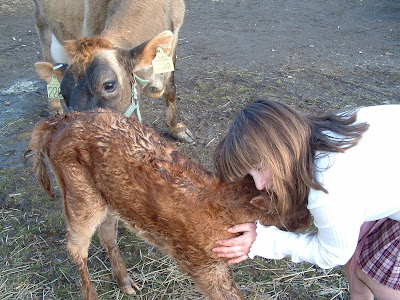 Here are four of the neighborhood kids, watching Matilda and Pearly tucked into their stall for the night. 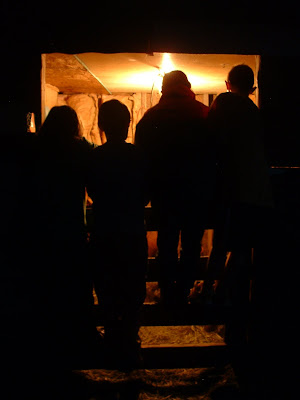 Posted by Patrice Lewis at 7:34 AM