Don stayed home from church this morning to keep working on fences. I had barely arrived at the adult Sunday School class when he called on the church phone (I didn't have my cell phone on) and said -- we have a new calf! 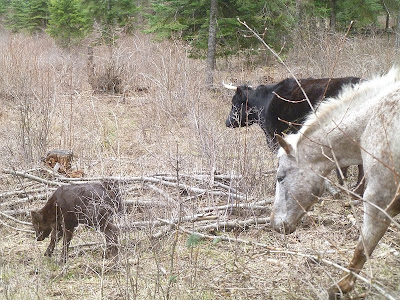 We've been expecting Jet to have her calf any time, but to our shock and surprise, this was Ruby's calf. The reason this surprised us so much is we thought Ruby had miscarried over the winter. We've never had a cow miscarry before, but a few months ago I noticed Ruby had suddenly gone from fat (as in, pregnant) to skinny. We had just concluded in our minds she wouldn't be having a calf this year. So this one was totally unexpected!

Naturally she was born at the bottom of the woods, farthest from the barn. We can't keep a newborn calf out in the woods -- too much chance of predation -- plus we need to dehorn her in the next few days. Plus there's too much mud out there right now. Plus the weather has been cold and wet.

But first the barn needed a little fixing. As with everything else around here, the end of winter brings a total breakdown in infrastructure. 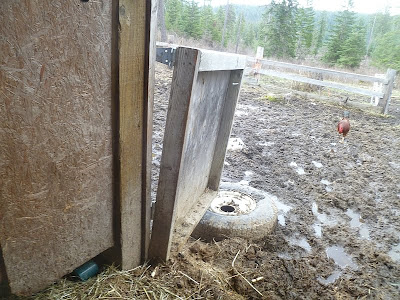 Don is clever at putting together stuff that falls apart, so within short order he had the door close-able again.

Next step... gotta get that calf in the barn. But how? Ruby has horns and new mamas can get testy. Our clever strategy: grab the calf and run. Well, walk. Damn, a newborn calf weighs a ton! At least it does when the mud is sucking at your boots and you have an angry horned cow somewhere behind you (Don was fending her off with a pole). Younger Daughter got these shots. 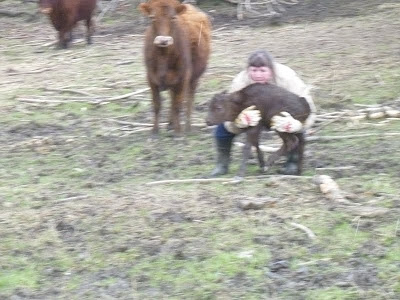 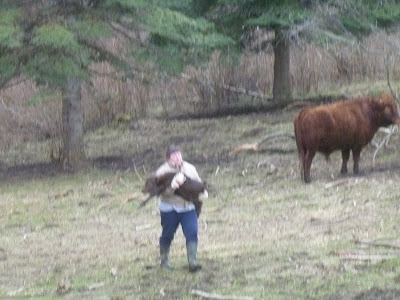 (Notice how the other animals are watching these proceedings with great interest. Nothing like a peanut gallery.)

Carrying the calf left me covered with meconium, the newborn poop. Guess I'll be washing my coat and gloves. But at least the calf was in the barn! Mama followed shortly thereafter, once she figured out where we'd taken her baby. 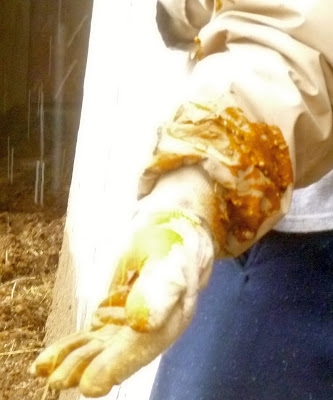 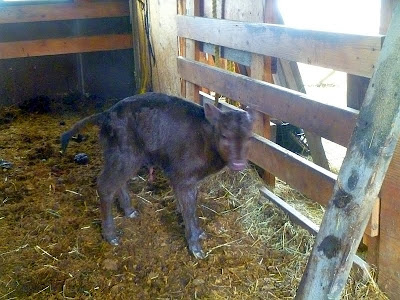 Ruby is an experienced mother and the little calf is nursing healthily. 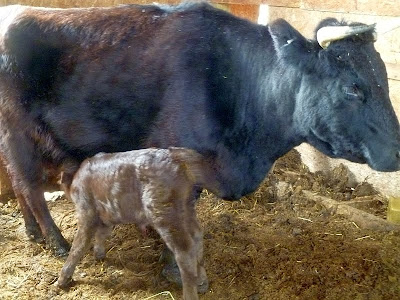 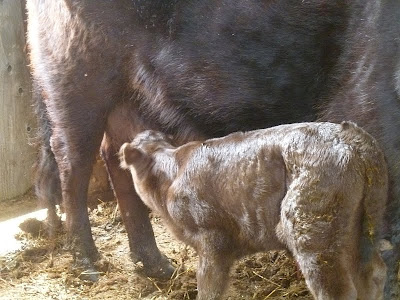 Can you see why we're wary of those horns? That's why we dehorn all our heifers now. 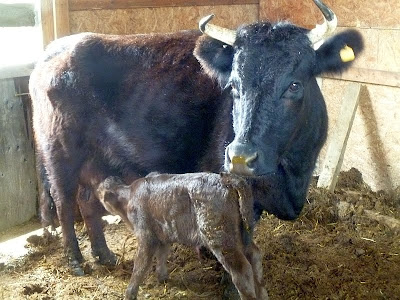 So that's the latest tangible asset we've added to our farm -- another little heifer!
Posted by Patrice Lewis at 8:57 PM