On Sunday afternoon as I was cleaning Matilda's pen, I noticed something interesting.

Matilda, for my newer readers, is our Jersey cow. All our other animals are purebred Dexters, but I fell in love with our neighbor's Jersey a few years ago so we got one of our own in November 2008. We had a nightmare case of mastitis when we got her from a commercial dairy north of us, but she has become my all-time favorite cow because of her sweet disposition.

Anyway, our bull Gimli bred Matilda last April. Wrong time of year, since that would mean a calf would be born mid-February. So last August we had the vet give her a shot of Lutalyse (an abortant) so she could be re-bred at a better time.

Now I'm thinking the Lutalyse didn't "take." That's because on Sunday I noticed Matilda was suddenly bagged up.

I haven't been milking Matilda for the last few months out of pure laziness. Pearly, her calf, was taking most of the rich milk and it was rather nice not to be tied to a twice-a-day milking schedule that I had before Pearly was born. As a result, Matilda's udder was flaccid.

But no more. Suddenly it's huge and turgid (bagged up), which only happens in the final weeks before birth. 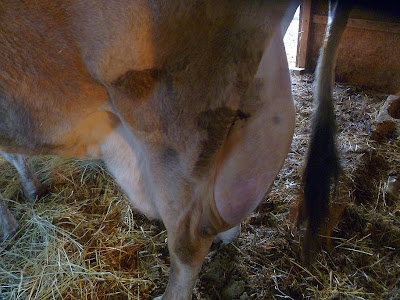 This morning when I let Matilda and Pearly out of their pen, I noticed a string of mucus hanging from her backside. Another indicator. 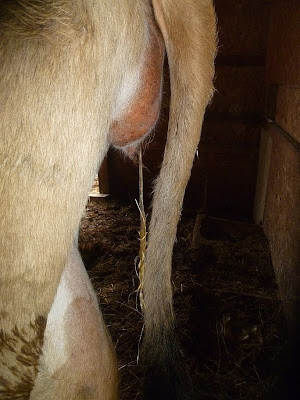 The reason this takes me so much by surprise is Matilda doesn't look near as pregnant as she did last year. I mean, last year she was massive. This year, no. 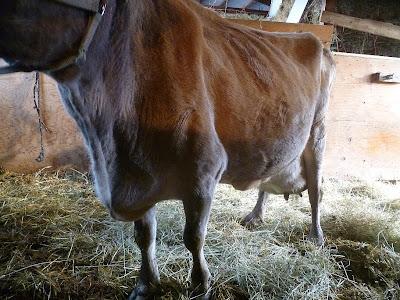 Concerned, I called the vet and asked what effect a Lutalyse shot could have on a calf if the cow doesn't abort. Could the calf be born deformed? The vet said no, Lutalyse wouldn't harm a fetus if the cow didn't abort.

So time will tell. At least our winter weather at the moment is mild with no snow on the ground, and we always tuck Matilda (and Pearly) into her pen at night, so she'll have protection if she does indeed have a calf in a couple weeks.

I'll keep everyone posted.
Posted by Patrice Lewis at 9:26 AM