I'd like to introduce you to a spiffy concept: canning bacon. This entire technique was developed by my friend Enola Gay.

In the past, Enola and her husband Sir Knight had purchased Yoder's canned bacon as a preparedness item. Trouble is, canned bacon cost an arm and a leg.

And the first time they opened a can, they found to their surprise it was wrapped in paper. Paper in a can? Yes. 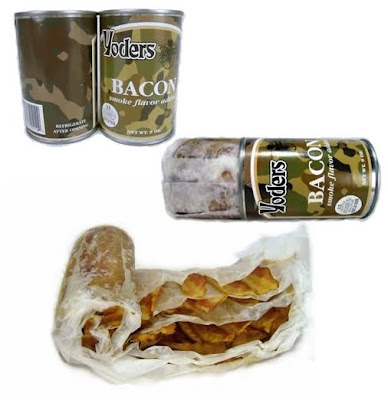 So Enola, brilliant lady that she is, decided if Yoder's could do it, she could do it too. Then she taught me as well. Here are the steps.

Start with bacon. (Duh) Here are six pounds, ready to can. 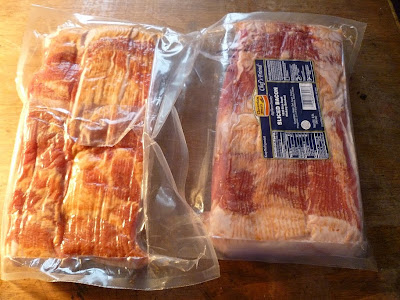 You'll also need a roll of plain brown paper, about one foot in width. I picked this up at our local hardware store. 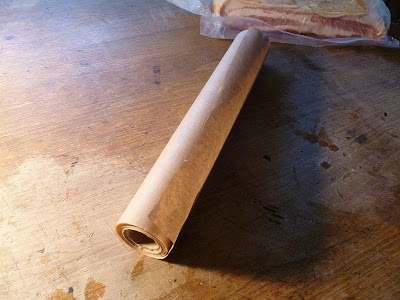 Roll out the paper to about two feet in length. 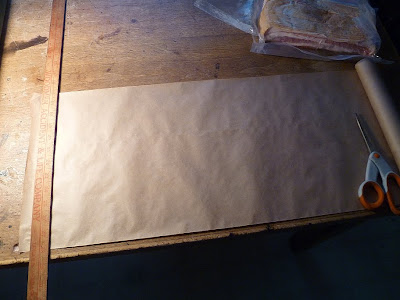 Lay slices of bacon on the paper, snugged up close against each other without overlapping. Put the slices head to foot if that will snug them up closer. How many slices do you put down? I have twelve photographed here, but depending on how thick the bacon is, you might get as few as nine or ten or as many as sixteen. That's just something you'll have to learn as you go. 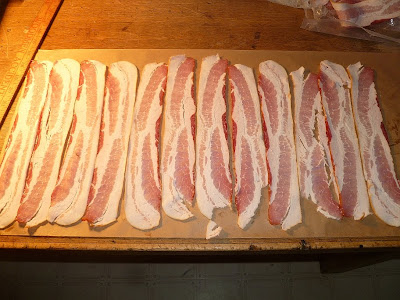 Cut the paper at the end of the line of bacon. Don't leave a "tail" of paper. 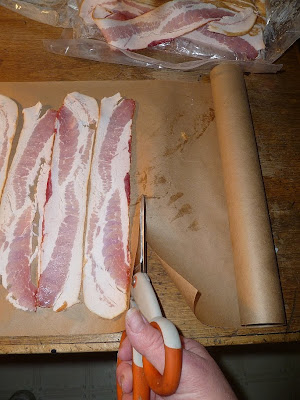 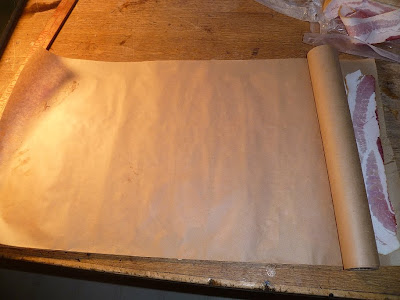 Here's where I lay a yardstick lengthwise across the bacon. To me, it's just easier to fold everthing over with the yardstick offering a guide. 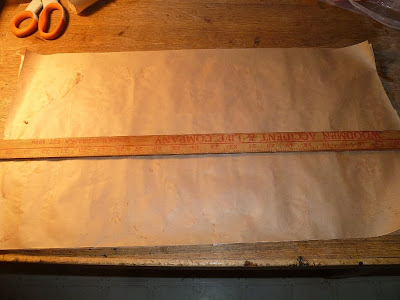 Now fold the bacon in half length-wise. 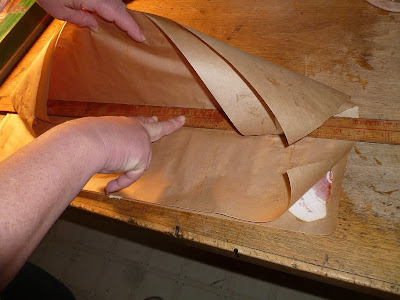 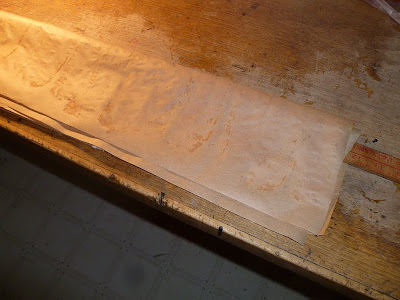 Now starting at the end, roll the bacon up tightly. You'll have to sort of "tuck" as you go. 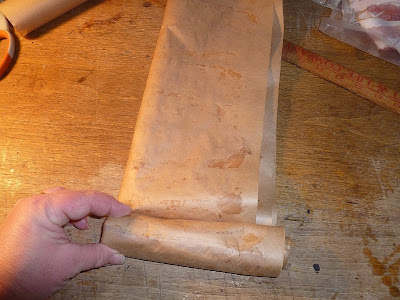 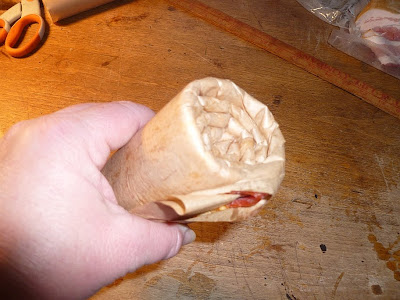 Now slip the bacon into a wide-mouth quart-sized canning jar. You may have to screw the bacon package a little in order to get it in the jar. If you have too much bacon in the roll and it's too fat to fit in the jar, simple unroll it enough to remove a single slice of bacon, then try it again. 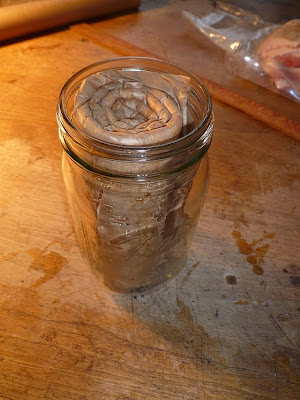 Out of those six pounds of bacon, I ended up with six quarts... 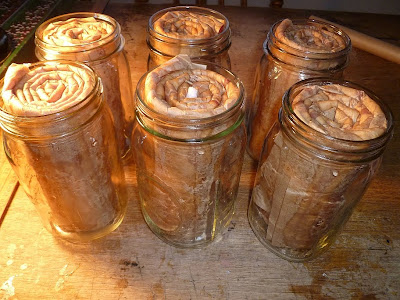 ...and a few slices left over, which I cut up and fried for bacon bits for the baked potatoes we had for dinner. 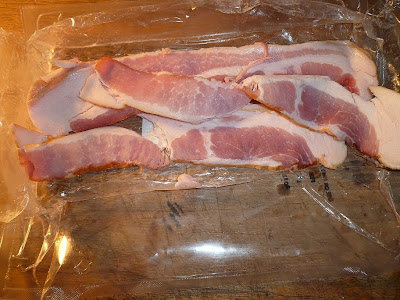 Lids on. You may have to push (squish) the bacon down into the jar if it sticks up too much over the rim. And DO NOT ADD WATER to the jars. This bacon is canned both raw and dry. 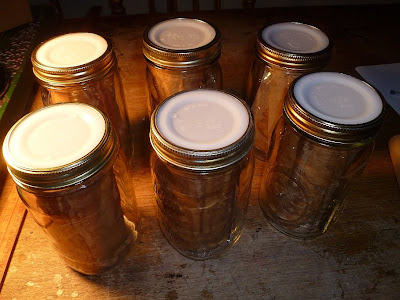 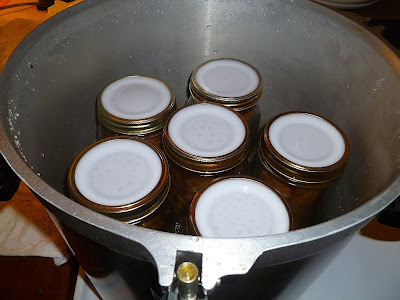 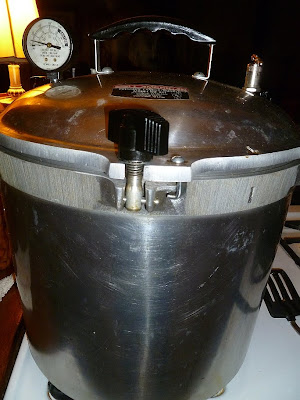 When the bacon is removed from the canner, you'll find there's about an inch of liquid bacon fat at the bottom of the jar.

Once the jars are cool, label and store. 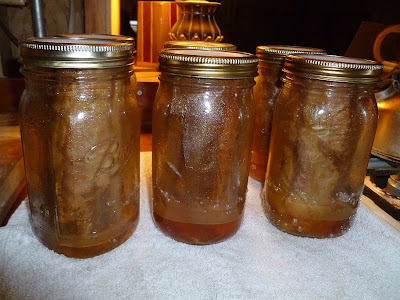 But what is the bacon like when it's opened? Doesn't the brown paper turn into paper mush? Is the bacon cooked or raw, crumbly or greasy?

Once the jar cools, of course the bacon fat will turn white and solid instead of clear and liquid. Slide the bacon out of the jar... 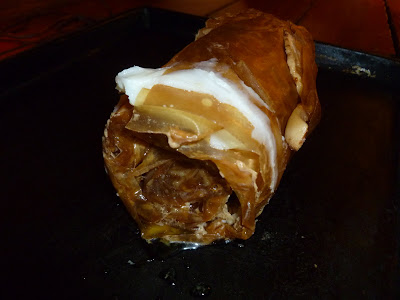 ...and spread open. The paper will be creased and greasy, but not disintegrated or crumbly. 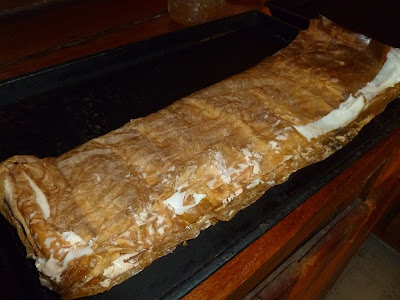 It's kind of messy to peel the paper off the bacon, but it will peel. By the way, some people prefer to use parchment paper, which should work just fine. I figger brown paper also works fine, so why go through the expense of parchment paper? 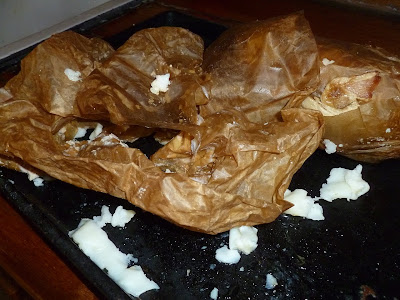 Once the bacon is free of the paper, simply fry it like ordinary bacon. 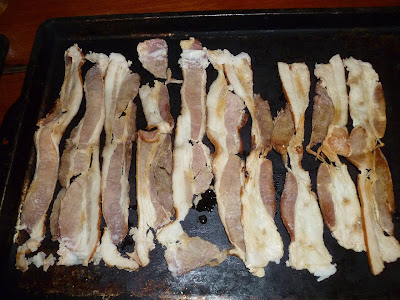 It cooks up great! 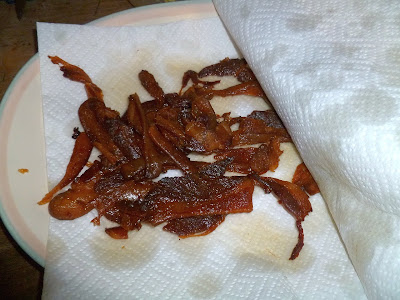 As I said, this technique is entirely Enola Gay's, and to her goes all the credit for developing it. I've canned up - oh, probably thirty or forty quarts of bacon so far (we love bacon!) and I couldn't be more pleased. In fact, Enola's technique is so interesting that Backwoods Home Magazine recently published an article by her on this subject!

I am now prepared to hear all the feedback telling me why canning bacon can’t be done.
Posted by Patrice Lewis at 4:51 PM