In the rural parts of our county, we have no garbage service. Instead, there are dumpsters located in various spots where people can put their trash. This is a blessing for those whose livelihood includes salvaging. I know there are a number of people who make a fairly decent living salvaging usable items from the dumpsters scattered around the county, either by cleaning stuff up and selling it, or by selling items to scrap dealers. It's all a tidy way to handle refuse.

People who have things they no longer want will leave the items beside the dumpsters (sometimes with little signs that say "Take me home with you, I work just fine" or "Free to good home" or whatever). We've taken a couple of bicycles the girls have outgrown and left them beside the dumpsters for another parent to bring home to his kid.

And we've had a number of lucky finds ourselves. One time shortly after we moved to Idaho, I was startled to find a beautiful and intact ladies' vanity table thrown away. The only thing wrong with it was one drawer was missing. So I fished it out of the dumpster, cleaned it up, and we've used it as a sewing table ever since.

Don took a dumpster run the other day. He came hurrying back, collected me, and we went to salvage an enormous load of aluminum siding that someone had dumped. Unfortunately they put the siding IN the dumpsters rather than piled NEXT to a dumpster, so it meant a lot of leaning over the filthy sides of the metal bins and eventually climbing in to hand stuff out.

But the haul was fabulous. We lost count but think we got about ninety sheets of siding. Don grinned about it for hours. What a bonanza! Outbuildings, here we come! 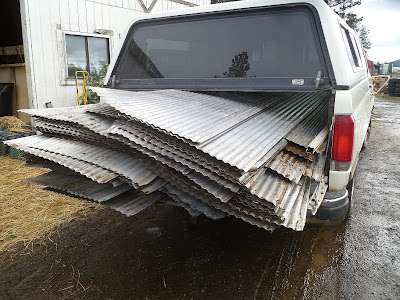 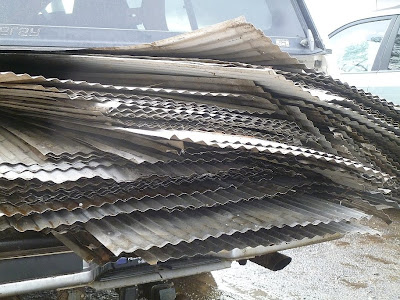 The truck tires compressed under all the weight. 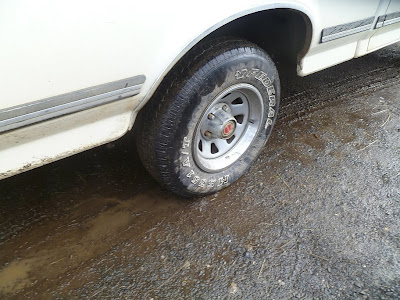 Of course, once I got home I consigned every garment I was wearing to the wash...
Posted by Patrice Lewis at 9:13 AM

Email ThisBlogThis!Share to TwitterShare to FacebookShare to Pinterest
Labels: salvaging