A few readers have asked about our neighborhood potlucks. I suppose now is as good a time as any to tell about them.

It all started about two years ago when a neighbor's husband was out of town on an extended business trip. She was left alone with the kids and we thought she might enjoy some adult conversation, so we invited her to dinner. She offered to bring dessert. Her kids and our kids did their own thing and we adults sat at the table and visited. It was so enjoyable we repeated it the following week.

As our neighbor left after that second meal, she said "I'll host next week," and our weekly potlucks were born. A third set of neighbors joined us shortly thereafter. We have other neighbors out here who join us from time to time, but these three families are the core.

We alternate between our house and the first neighbor's house because they're big enough to accommodate the ten or eleven people who regularly meet. The host makes dinner, and the visitor brings dessert. The third neighbors bring drinks and a supplementary dish (mashed potatoes or biscuits or something).

None of us are outstanding chefs but showing off our cooking skills isn't the purpose of the potlucks. By now we're pretty familiar with each others' dietary tastes and limitations (one person is lactose intolerant so we don't prepare cheese-laden dishes, for example) and we cook around those parameters. Sometimes potlucks get canceled for a week or even a month if things are especially busy. The day also varies depending on everyone's schedules (right now we're meeting on Sunday evenings).

So yesterday was our turn to host. By cleaning the house on Saturday, it meant that Sunday all I had to do was cook. The nice part about having a crowd over twice a month is it means I'm forced to clean the bathroom and vacuum the floors at least that often.

Clean living room. (My dearest decorating wish someday is to get rid of the hideous blue carpeting the house came with and replace it with hardwood floors. We can't just strip the carpet out because there's nothing but concrete floor underneath. Ah well, for now I'm content.) 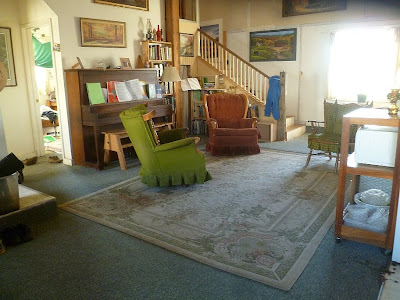 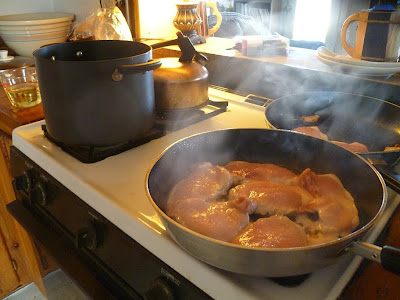 Shortly before the guests arrive at 6 pm, I light all kinds of candles and oil lamps around the house, just for atmosphere. Mostly this is a winter habit since it's still daylight at 6 pm during the summer. 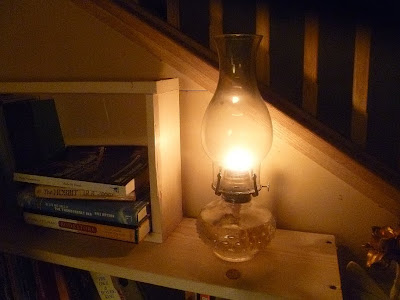 We say grace before dinner, of course. Here everyone is lining up to fill their plates. One of the families is LDS (Mormon) so I called them in advance and asked if a wine sauce would be okay. (Mormons don't drink alcohol.) Since the alcohol itself cooks off during the preparation, the wine sauce was fine. This is what I mean by being considerate of everyone's dietary parameters. 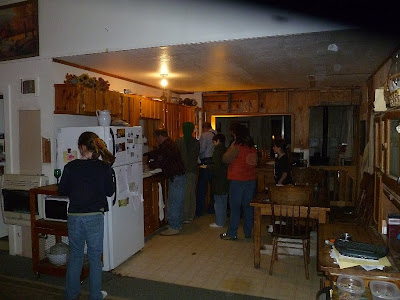 The adults tend to congregate around the kitchen table while the kids scatter elsewhere. Lydia knows firmly where she wants to be - someplace where something might accidentally drop on the floor! 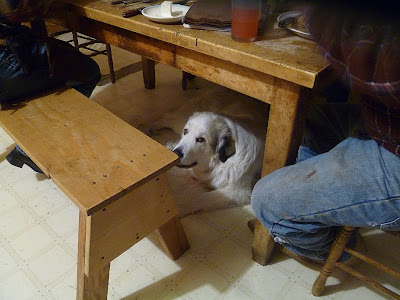 We serve coffee or hot chocolate after dinner while I do a quick batch of dishes. Since we don't have a dishwasher, this means I'm less overwhelmed with cleanup after everyone leaves. Since all the guests tend to stay around the table, I'm not excluded from conversation.

Dessert this time was black forest cake with ice cream... 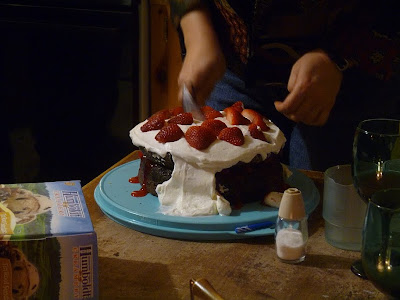 ...which was eagerly anticipated. 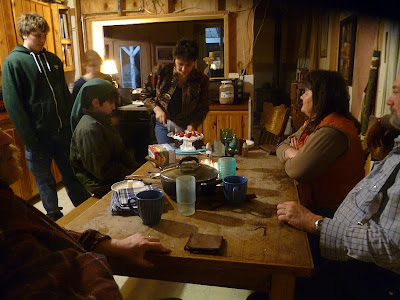 I do a second batch of dishes afterward (coffee cups and dessert plates) and then I'm free to sit and visit with everyone. 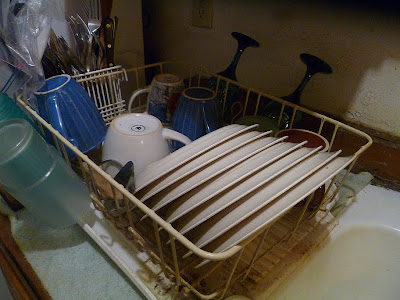 No one stays terribly late - people have to get up for work and school the next day - but it's a pleasant way to connect with our neighbors on a regular basis. Sometimes we're all so busy during the week that this is our only time to see each other. We're blessed to live in a neighborhood where everyone gets along so well.

Here's a photo I took last summer where a wider circle of neighbors were being hosted by a new neighbor having a sort of open house. His campfire was perched on the edge of the slope of the canyon and the sun was going down behind us. I thought this photo turned out splendidly - click to enlarge. 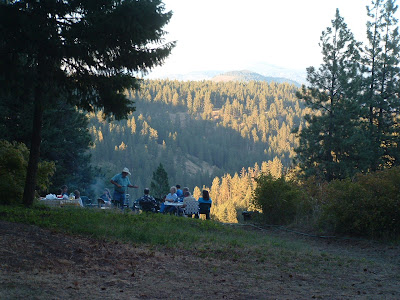 Here's the dish I made last night, pork chops in white wine sauce.

Pour olive oil into saucepan over medium heat. Gradually whisk in the flour until the mixture looks like paste. Reduce heat and slowly add the wine. The mixture will thicken quickly. Slowly pour in the chicken stock, stirring continually. Add a little pepper, and rosemary to taste. (I don't add salt because the chicken stock is already salty.)

Put the pork chops in a crockpot and pour the sauce over the chops. Let the meat and sauce simmer for several hours. Pork chops tend to be tough when just pan-fried, so I like to simmer them slowly in a crockpot to make them tender. (Besides, this means the main dish is essentially done and I can concentrate on other things.) I doubled this recipe because we had so many people. I served it with rice and the neighbors brought mashed potatoes.

Anyway, that's the scoop on our neighborhood potlucks.
Posted by Patrice Lewis at 8:20 AM