Last Saturday when our (closing) library had its salvage sale, I picked up a stack of free magazines – National Geographic, Smithsonian, National Wildlife, that kind of thing. They’ve been in a messy pile on our living room floor where people could pause and dip into this or that issue, read for a bit, then put it back in the pile. That’s always the fun part of obtaining new reading material. 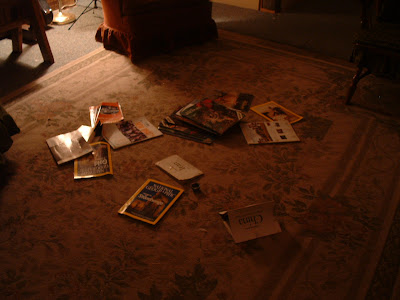 So this afternoon I’m leafing through the March 2008 issue of National Geographic, perusing the letters to the editor. Apparently in a previous issue there had been an article on hunting, and many hunters were writing in praising the article’s fairness and balance.

But then I came across this gem:

“I was so shocked and dismayed when I picked up this month’s issue glamorizing the barbaric practice of hunting that I had to check to make sure the year was indeed 2007, not 1957 or, for that matter, 1907. There is simply no excuse for hunting. If you want the thrill of pursuit, become a bird-watcher or wildlife photographer and stalk your prey with a camera. If you want to eat exotic meat, everything from alligator to zebra is available through farming, where animals are slaughtered not for sport but out of necessity. If you like guns that much, go to a firing range. And if you really must engage in destructive violence for a sport, man up and take on a fellow human in a boxing ring or a karate dojo. Hunting is killing for pleasure. It is pathetic, sick, and cruel.”

Firstly I’ll point out that neither my husband nor myself hunt. We don’t object to it, we just don’t bother. Why should we, when we raise our own meat? But as you can imagine, here in north Idaho we’re literally surrounded by hunters. ’Nuff said.

But you know what was the thought that went through my brain after reading this letter? With our heightened concerns about a potential collapse in the economy, I told my husband, “This is a clueless urban liberal with no practical survival skills. He’ll be the first one down.” Sad, but that’s what went through my head.

I hope I’m wrong since, of course, I wouldn’t wish that on anyone.
Posted by Patrice Lewis at 9:55 PM