Last week one of our roosters lost his mojo.

Remember mojo from the Austin Powers movies? I suppose it could loosely be defined as one's virility. Well, whatever it was, our rooster lost it.

Rather than strutting around the barnyard, he was drooping in a corner. Rather than nabbing the hens, he was hiding from the other rooster. I've seen this before. When a rooster loses his mojo, he loses the will to live.

He took to roosting in places besides the chicken coop, always a dangerous prospect. Sure enough, yesterday morning when I woke up I heard crows cawing from behind the barn. When I went to release the chickens, I found his carcass outside the corral, doubtless picked off by a coyote. He had been dragged from one of the barn stalls so hard that he was practically plucked.

Feathers in the stall: 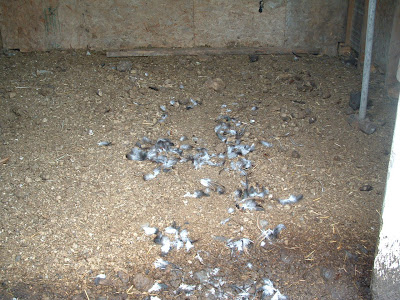 Feathers all across the corral: 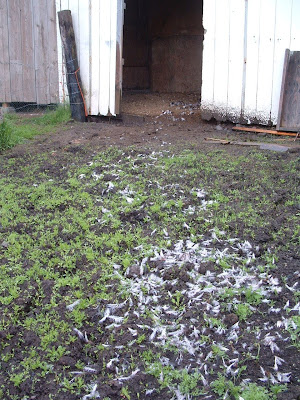 What's left. I don't know why the coyote didn't carry him off, but at least the crows were enjoying a feast. 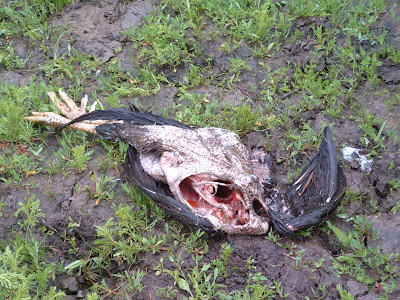 Now we're down to one rooster. If one of our chicks doesn't turn out to be a rooster - still a bit early to tell - we may advertise to pick up a surplus rooster somewhere.
Posted by Patrice Lewis at 5:36 PM