Handing out nuggets of gold...

It's funny how blessings happen unexpectedly.

As usual, I've been running short on canning jars. I've been making it a policy to check every thrift store we enter for any jars, and have picked up about three dozen quarts so far.

Then early this week, a lady from our church named Daina called. She had a friend who was helping an elderly woman clean out the junk in her home prior to moving into a retirement center. The friend had found some gallon jars. Did I want them?

You bet! Daina said she'd bring them to church with her on Sunday.

Well, she called later in the week and warned me there were more jars than she anticipated. In fact, I might not be able to fit them all into our car in one trip. No problem, we could leave the excess jars at church and pick them up later.

So this morning (Sunday) as I walked into church, Daina amended her story once more. "Did you look in the back of my truck?" she asked.

"There aren't too many gallon jars after all..." she began.

I started to make noises of disappointment when she added, "...but there are a lot of pint and quart jars. Is that okay?"

I stared at her. Okay? Did she just ask if that was OKAY?? It was all I could do to keep from jumping up and down!

We went out and looked in the back of her pickup, and my jaw dropped. It was packed, absolutely packed, with canning jars of all sizes!

And Daina didn't want them. I know this because I asked over and over again, "Are you SURE you don't want them?" But, being a bit older as well as single, she was scaling back and simply wasn't canning like she used to, so she honestly didn't want them.

So there they were, dozens of dusty dirty jars filled with old dead spiders, gleaming in the morning sunshine like nuggets of gold. And she was giving them to me FREE! I felt guilty, like I was taking advantage of someone somehow. 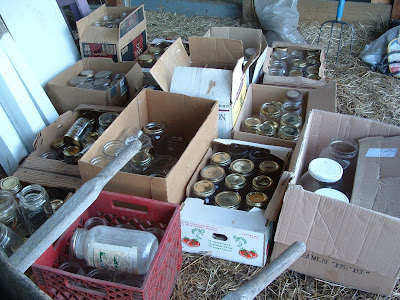 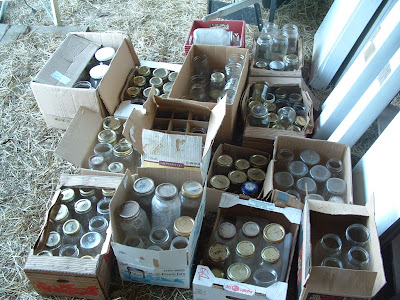 At home, I unloaded them into the barn for the time being, and took a tally. Five gallon jars, six half-gallon jars, 86 quarts, 83 pints. WOW!!

What a total and complete blessing!
Posted by Patrice Lewis at 10:34 PM