In our world history book, we've been studying knights and the Age of Chivalry. We discussed how boys who were sons of lords were raised to be knights by dividing their lives into three stages. A boy stayed with his mother until he was seven; from seven to fourteen years he served as a page; and from fourteen to twenty-one he served as a squire. Ideally he was knighted at 21 and would thereafter embark on his adult life in service to his liege lord. 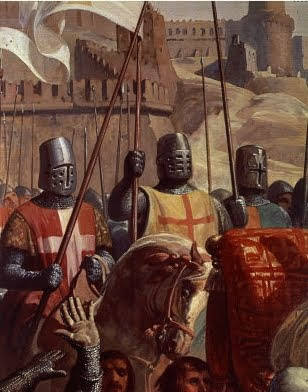 But what struck me in this particular book is the description of the boy's page years. "His chief business was to wait on the ladies of the castle," says the book. "He ran their errands, carried their messages, waited on tables, etc. He also learned to ride a horse and to be brave and courteous."

I stopped reading at this point and we discussed why a boy would spend so many years specifically waiting on women. Women, I explained, are the civilizing influence on men. If a boy can learn manners, courtesy, and the expected behavior toward women at a time in his life when those expectations would not cause resentment, then he'll have those skills and manners for life.

Then he becomes a squire. During this period of his life "he waited on the men, as he had waited on the ladies when he was a page. He attended to the men's horses, went to battle with them, led an extra horse, and carried another spear or lance in case these should be needed."

In other words, during his teens years when a boy's body is strengthening and his mind loses interest in the softness of women - in other words, when he is striving to learn what it takes to be a man - then the boy is immersed in the world of men and men's duties. 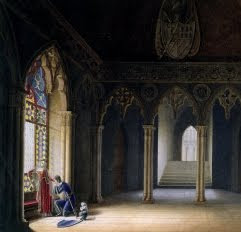 Admiring men as I do, this struck me as a sensible arrangement for its time. It's clear the Medieval mind knew the stages of a boy's life and what it took to raise a chivalrous knight. It's no accident that the legends from this time have come down through the ages with the Court of King Arthur, etc. So the question arises, can we do this today?

As the Age of Chivalry passed, society still had to deal with its young men. The answer was to apprentice boys under the tutelage of another man to teach the boys a trade. Obviously history is full of stories of horrible apprenticeships, but the ideal result was the same as that of a squire: just when a boy reaches the age when he needs to get away from the feminizing influence of his mother, he was assigned work duties under a man and began to learn a trade that would harden his muscles and his mind, and allow him the opportunity to be gainfully employed as an adult. 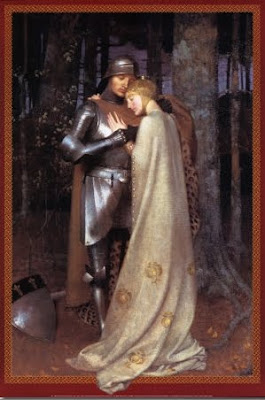 We have no sons to raise to knighthood. But we have daughters who will some day marry someone else's sons, so I'm always interested in how people raise their boys. My friend Enola Gay's sons are the perfect laboratory because she and her consort Sir Knight are raising two fine youngsters. She has some excellent thoughts on the subject of raising boys here.

"Knighthood" in today's parlance obviously doesn't mean riding around on horses and slaying dragons. Or does it? A knight treats women with courtesy and works hard at whatever his duties and tasks are in life. He takes pride in providing for his family, in working hard and honorably, in keeping his word, and in assuming his rightful place as head of his household. 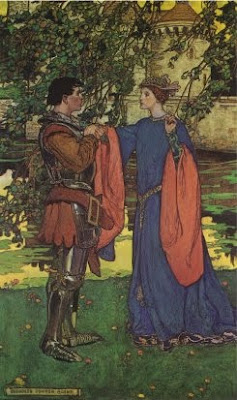 I'm pleased to have married a Knight and so my daughters are growing up with an excellent example of the right kind of man to marry.
Posted by Patrice Lewis at 9:09 AM