A fresh face on the farm (well, soon)

Ever since our Jersey Matilda lost a second quarter through the magic disappearing teat technique (it turned out the cartilage collapsed, by the way - irreversible), Don and I have discussed the idea of getting another Jersey cow.

But how to find one? Most mature cows we find for sale are culls. Matilda - much as I adore her - was a cull. Commercial dairy cows, I learned, only have a working life of four or five years. No dairy would sell a healthy young four-quartered cow, at least for anything short of a fortune.

We won't get rid of Matilda, of course. She makes beautiful calves and she's such a beloved member of the herd that she has a place on our farm for life.

But Don's been keeping an eye on Craig's List for Jerseys. We've called about a couple of animals, but either they were culls or they were too expensive.

So yesterday he called me over to his computer and showed me a new listing on Craig's List: a five-month-old Jersey heifer. The photos showed both her and her tiny udder (meaning, the sellers are cognizant about her milking potential). The price was reasonable. I immediately called and left a message and frankly didn't expect a call back - surely someone had snapped this little girl up already?

But no, the sellers returned the call a few hours later and said she was still available. All my questions were satisfactorily answered. Don and I decided to take a trip up and see her. Today.

In fact, we made a "date" of it. Don and I seldom have time together without kids along, so we left the kids at home (with a host of chores to do, poor things). It was going to be an all-day excursion because this nice homeschooling family lived on the other side of nowhere, a three-hour one-way drive.

It was a grey and rainy day. We had never traveled to the interior parts of the extreme northeast corner of Washington State before, so it was interesting to see the terrain. Once we escaped from the intensity of Spokane, the land alternated between flat open areas, steep mountains, and agricultural valleys. Yep, other side of nowhere. 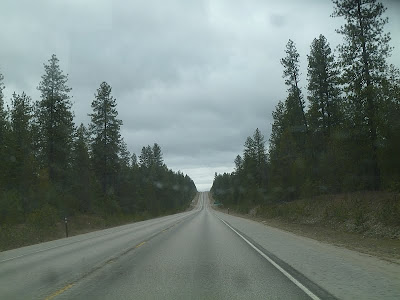 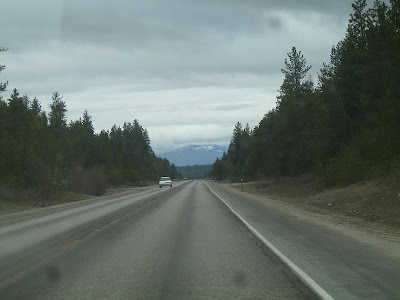 We passed this drop-dead gorgeous farm on the way - I just had to take a snapshot - and it's for sale! (Too bad it was right on the road.) Anyone want a little piece of paradise in northeast Washington? 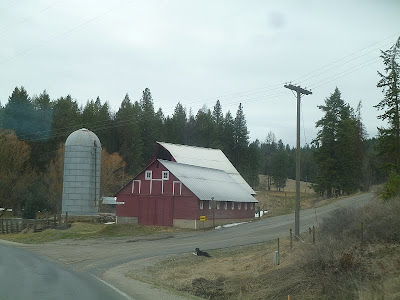 We arrived at last at the seller's farm and met our little girl. She was enchanting - healthy, leggy, good udder potential, sweet-natured, halter-broken. 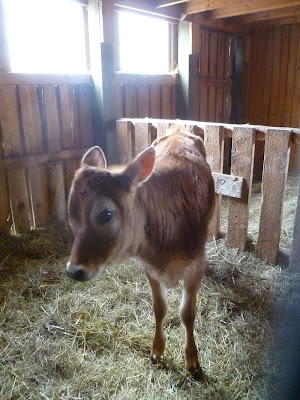 Obviously the animals on this farm are well-cared for. We met the mother Jersey and while her udder wasn't quite as tight as I would have liked, it was nothing like the pendulous blob poor Matilda's udder has become. The calf's father was a high-quality A.I. (artificial insemination) bull. The nice thing about A.I. is you can choose the sire's qualities according to what you're breeding for - and can even select the gender of the calf. Amazing. 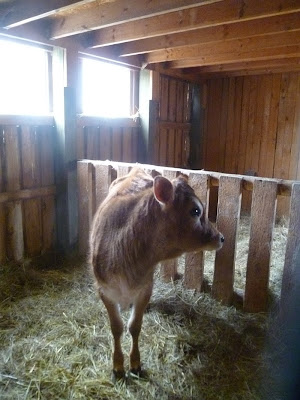 The only disadvantage we saw is the heifer hasn't been dehorned. At five months old, it's far too late to use dehorning paste, so we're faced with either the horrors of manual dehorning, or having a horned Jersey. We're not sure yet which route we'll take. 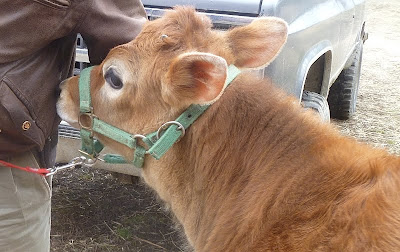 She has a very sweet disposition and, just like Matilda, wants to lick us (hence this unflattering shot of her tongue). 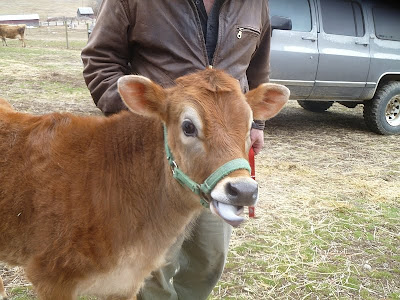 The bottom line is, we bought her. We paid about half down, got a receipt, and left for the long drive home, pausing first to admire the vistas from the seller's farm. 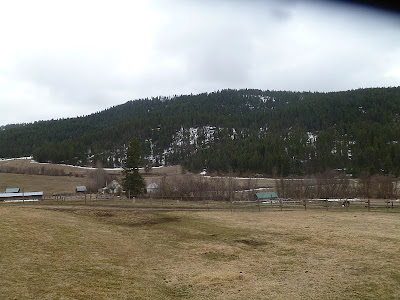 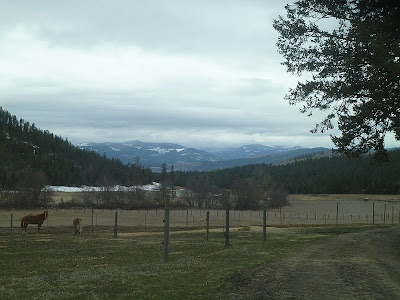 We'll probably pick the calf up next Monday. First we need to find someone's horse trailer we can borrow to bring her home, and we also need to make arrangements to stop at a vet's in Washington to get the necessary Bang's vaccination, health certificate, and brand inspection required by law to transport livestock over state lines.

On the drive home we passed some "Burma Shave"-style signs with the Ten Commandments posted by a church, which I thought was clever. 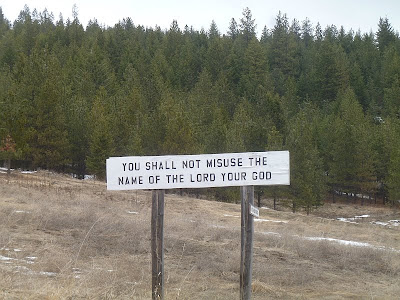 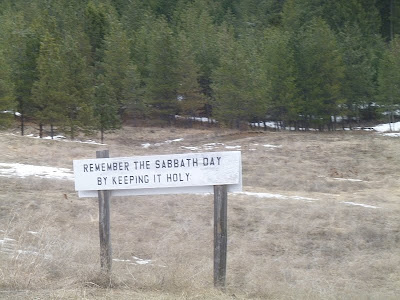 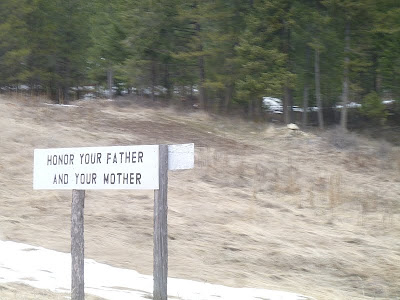 We haven't decided on a name yet, though Older Daughter suggested "Polly" which is growing on me. (I was looking for something old-fashioned, like Matilda's name.)

Oh, and the kids did all their chores too. The house looked lovely when we got home.
Posted by Patrice Lewis at 8:53 PM