Raising boys to be husbands

See those damp patches on my husband’s knees? Those came from working on fencing. 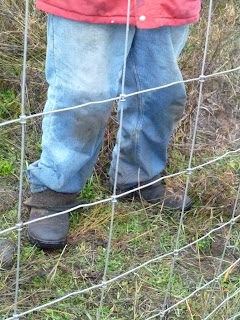 We’ve been tightening, repairing, and replacing fences in the last couple of weeks. In this particular photo, those damp patches came from my husband kneeling over and over again on wet ground to ratchet the bottom wires tight before we wired everything in place to the T-posts. He's the one kneeling on the ground getting wet. Not me, him. In other words, my husband is being a true Man and doing the dirty work.

This reason I mention this is because of a recent article I read called How to Raise the Men We’d Want to Marry.

It’s a fine article, I guess (speaking as one who has no sons). But I found it just a little too full of new-age claptrap, just a touch bit heavy on the feelings and emotions of boys at the expense of what woman might actually want in a future husband.

Please don’t misunderstand; by no stretch of the imagination am I suggesting we don’t nurture the feelings and emotions of boys. I may not have any sons, but I have three brothers (and no sisters) so I flatter myself that I’m a little familiar with how boys operate. But the impression I get from this article is that the boys are missing out on the rough-and-ready, no-nonsense, bang-about experiences with their fathers which offsets and balances the emotional nurturing from their mothers.

You might think this to be a funny thing for me to write about, n’est-ce pas? After all, what do I know about raising boys? Perhaps nothing… but I’m interested in how you raise your boys. We may not have sons, but we have daughters; and someday our daughters will find someone else’s sons to marry. So the proper raising of sons is of intense interest to me.

A boy needs lots of emotional nurturing from his mothers when he’s young. But as he grows up he naturally start gravitating away from his mother’s cuddles and embraces towards the more manly example set by his father. He’s less interested in “talking about his feelings” than he is engaging in farting contests with his friends. That’s just a boyish nature, and I don’t see anything wrong with that.

I’m a firm believer that boys don’t do well if their nascent manly qualities are not nurtured and guided by their fathers (or father figures). I’ve written about this before and my opinions haven’t changed.

As an amusing aside, one day I was visiting my friend Enola Gay while her 2½ year old son Master Calvin was engaged in a battle with padded wooden sword and shield with his older brother. Calvin got smacked on the nose with a sword. Crying, he came dashing into the house and received a kiss and a moment of sympathy from his mama. Then, tears miraculously dried, he raised his sword and dashed outside, once again the mighty warrior doing battle to protect his sisters. It was hilarious because it was ALL BOY.

So anyway, this whole line of thought started me thinking about what I value in a man, and how I would want a boy to be raised if he was going to marry one of my daughters. What qualities do I admire in a man? Fortunately I need look no further than my own house because my husband exemplifies all the manly qualities I could ever hope for – and my daughters see those qualities too.

Here’s what qualities I believe a man should possess, in no particular order:

• Humor. My husband is funny. Hilariously funny. There are times he has the girls and me in stitches as he imitates accents or tells a story with added melodrama or otherwise finds the more amusing side of life. Humor can get you through the darkest and most uncertain of times.

• Morals. Men should have high moral standards. These standards will translate into proper fatherly authority and guidance for his children.

• Warriors. Men should be warriors. I don't mean all men should be soldiers or police officers; I mean a man should be ready, able, and willing to defend his family under whatever circumstances arise. The defense could be as low-key as words (telling his mother to stop picking on his wife) or as dire as shooting an intruder who is threatening his family.

• A work ethic.  A man, my husband tells me, should be able to provide for his family. His opinion is not that women shouldn’t work outside the home – on the contrary – but that women shouldn’t have to work because the man is too lazy to get off his duff and find a job, any job, to make ends meet. A man takes pride in doing whatever lowly job is necessary to provide income for his family.

• Honorable. Men should be honorable. “Honor” is a broad term and encompasses many things: keeping one’s word, providing for his family, protecting our dignity and pride… the list under the term “honor” is nearly endless.

• Honesty. Men should keep their word. My husband is of the old school of thought that a man’s handshake and/or word is as good (or better) than a signature on paper. If he says he’ll do something, he’ll move heaven and earth to keep his word. And if something prevents him from keeping his word, he will apologize and try to make up for it.

• The Head. A man should be the Head of the household. A lot of modern women take exception to that term, somehow seeing it as demeaning or insulting. By contrast, I see it as comforting and loving. I am the Heart of this household, and as everyone knows, a body is no good without a heart, just as a body is no good without a head. We need both, and the fact that I view my husband as my Head in no way diminishes my importance (especially since I am his Heart). But someone has to have the final say in a house for peace and order to prevail, and God in His infinite wisdom ordained that job to go to the man.

Hee hee, but smart women pick men who truly understand what being “the Head” means. Remember your Laura Ingalls Wilder books? Laura admired the way her parents worked together. I once saw it written that Caroline went wherever Charles took her, but Charles would only go where Caroline let him. In other words, being the Head of a household doesn’t mean being a nasty dictator. In means taking wise counsel from others, primarily one’s Heart, to discern the best path for a family to take. So an important task for a woman in choosing a husband is to pick a man who truly understands what it means to take his place as Head of the household.

• Adoration. A man should have the adoration of his wife. Ladies, this is the single biggest factor to keep your man happy. Don’t ever emasculate your man by nagging or (my personal peeve) ragging about him to your female friends. Discussions with your women friends should center on the latest greatest thing your man has done, not on his alleged flaws. Sure he’s flawed… but you know what? So are you. So adore your husband and watch him adore you back.

So while the “empathy” and “being good listeners” and “expressing feelings” qualities listed in the article (all feminine qualities, I might add) might be a plus in a future husband, I sure as heck wouldn’t depend on those alone to make good husbands for my girls.

Give me a guy with damp patches on his jeans any day. It means he’s a true Man. 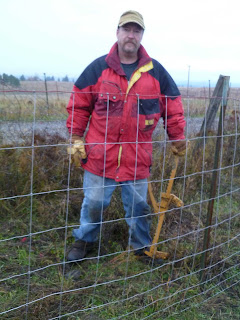 Posted by Patrice Lewis at 9:26 PM