From the messy desk of the Husband of the Boss:

As you may recall, we brought to your attention a new contest sponsored by Safecastle LLC. Specifically the contest asks for essays and video entrys on the subject of preparedness, self sufficiency and survivalism. We also provided a link so that you, our esteemed readers, could get information on the rules and the fourteen blogs where you could send your entries.

Apparently you folks went there and took a look. In fact, a LOT of you went there.

Yesterday we received an email from the folks at Safecastle. They had noted a lot of traffic coming from here to their blog. They also mentioned that they had originally planned for fifteen blog associates rather than fourteen, and would we like to take a place as the 15th?

So we are now officially a participating blog in the Safecastle Freedom Award 2010-2011 contest. 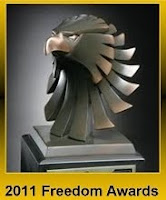 Once again, you can see their rules here.

Since you can now submit your essays directly to us, we have a few addendums to those rules. NOTE: We won't be editing any submission. We'll be posting your entry exactly as we get it. So make sure you cross your t's and dot those i's. If you are uncertain as to your composition abilities, have someone with those skills act as your editor.  (It's what I do. Fortunately I married her so as to keep my editorial expenses low.)

Another thing. While there are some great prizes for the contest as they stand, there can only be a few finalist winners (one essay and one video from each participating blog). Being the "politically correct" type of people we are, we just don't think that's fair. So we will be selecting the ten best submissions to Rural Revolution and awarding each of those submitters with a Rural Revolution laser engraved wooden tankard. And in keeping with current public school educational standards, each tankard awarded to our ten semifinalists will say "Winner." (Actual design of the laser engraved tankard to be determined down the road a' piece.)


Folks, you are the reason this blog has seen the success that it has. And not to put any of the other participating blogs down (since I read most of them and enjoy them), we here at Rural Revolution have a somewhat different take on preparedness and self-sufficiency then a lot of the other blogs out there. We live the way we do because we think it's the best way for us, regardless of what is coming down the pike. And from what we hear from a lot of you, you agree with this philosophy.

So. Want to write about the best kinds of ducks to raise or the best way to raise them? Goat keeping secrets? Building a better cistern? We'll post them. Want to make a video about why prepping is Godly? We'd love to see it. New to the whole prepping scene and want to tell us about your successes (and failures - we all have them)? Send it in! Got an idea for a better chicken tractor? (Yeah, I'm not real sure what it is either.  I'm guessing it's a D8 with a processing plant that rolls over the flock and leaves cleaned, plucked, and wrapped birds ready for the freezer.) Let us post it.

So. Here we go. Send in your pieces and let's start the discussion.
Posted by Patrice Lewis at 2:13 PM

Email ThisBlogThis!Share to TwitterShare to FacebookShare to Pinterest
Labels: contest, Husband of the boss, Safecastle