It has been a Very. Long. Day. And a noisy one too.

Polly yelled the whole day through. I let her out of her pen this morning and let her meet Matilda and the Brat Pack (Smokey and Pearly, as well as little Thor). The calves all yelled. Polly yelled back. We sometimes jokingly call our farm Jurassic Farm because of all the noise (reminiscent of the dinosaurs in the movie Jurassic Park). Today was one of those days. 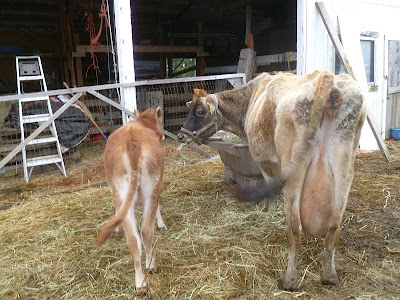 I think I was secretly hoping that Matilda - maternal, will-nurse-everyone Matilda - would "adopt" Polly on sight and ease the poor kid's loneliness.

Nothing doing. While she certainly wasn't aggressive, Matilda left no doubt as to who was boss. Things went better with Thor. You could almost hear Polly thinking, "All right! A kid brother!" 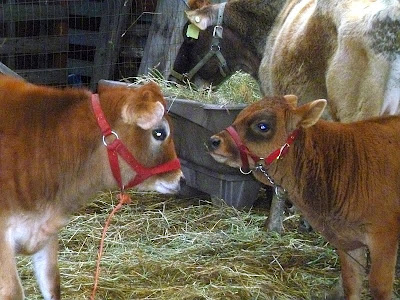 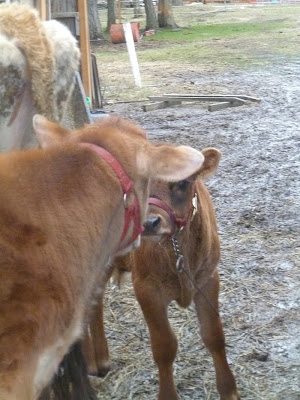 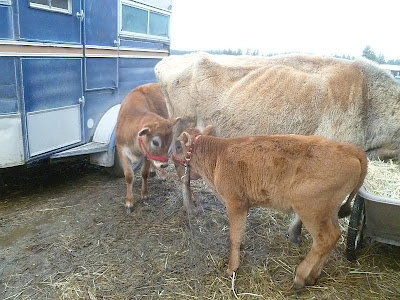 Polly was lonely. Where she came from, there was mama and no other cows, so she didn't have to deal with anything as primitive as a pecking order. But here, she has to get used to being the low gal on the totem pole. She certainly made friends with Thor and Smokey, and as the day went on Matilda was more and more tolerant, but no one really "warmed" to the poor kid.

And she kept trying to sniff out Matilda, doubtless recognizing a mother figure when she saw one. 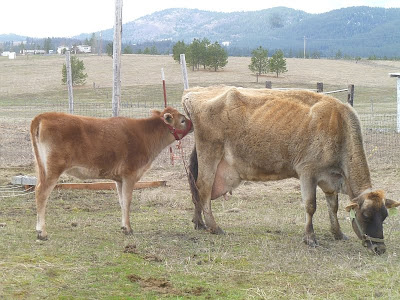 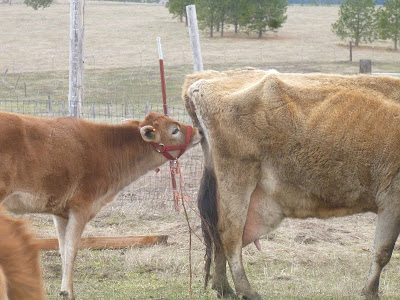 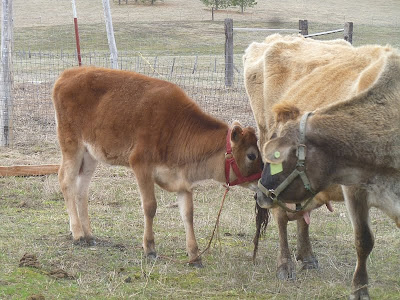 And all day long, she yelled until I thought she would go hoarse. At last in the afternoon I closed her into her pen. Younger Daughter and her friend Miss Calamity spent some time brushing and petting her. 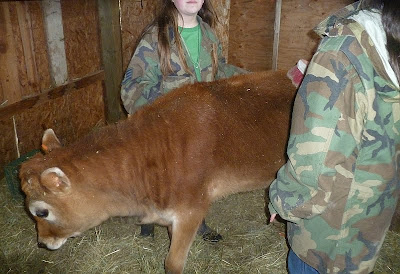 Meanwhile there's been a shrieking wind all day, the bull and steer got loose and kicked up their heels in a flamboyant fashion across the neighbor's land until we could round them up, and the sucking mud continues to squelch everywhere. I have a column and an article due tomorrow, the chicks have gone past the awww-cute stage into the stinky stage, and the State of Idaho is claiming we owe them $1054.16 (which we most assuredly do NOT).

Maybe things will be better tomorrow.
Posted by Patrice Lewis at 6:47 PM