I woke up this morning not only feeling better physically, but mentally as well. It's like my mind finally cleared itself of the fog it's been wrapped in for almost two weeks. Man oh man, I hope I don't get that sick for another decade or two. I'm so thankful this flu bypassed Don and the kids.

I felt so good this morning, in fact, that I went out and did my usual barn chores, specifically telling Don to sleep in for once. It took me almost twice as long as usual - and I skipped cleaning Matilda's pen until the afternoon because I was too wiped out - but I did them.

Got treated to a pretty sunrise for my efforts. 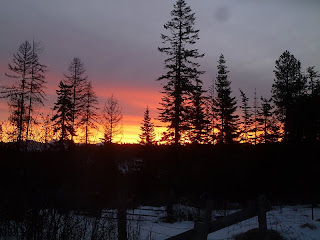 Nebuchadnezzar, who managed to hop the fence yesterday evening, somehow got a loop of hay bale twine over him. Fortunately it was a simple matter to cut the twine. 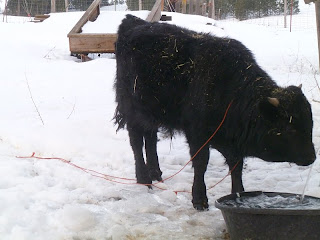 Any physical labor tuckers me out, but as Don points out, effectively I haven't eaten anything but yogurt since last Sunday night. I just have no energy reserves left. On the plus side, I managed to lose ten pounds. Don says I should write another book, this one called "The Yogurt-and-Influenza Diet," but I told him I wouldn't wish that on my worse enemies.

On a brighter note, a couple of milestones I wanted to point out: My Google followers are now at 375!! 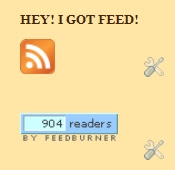 I gotta admit, I'm a hopeless number-watcher, so these statistics please me immensely.

A couple of random things I wanted to clear up. Last week a reader inquired as to why I had banished her from posting comments on the blog. Had she offended me, she wanted to know?

Of course not. I reassured her that this blogger program won't let me banish anyone, even if I wanted to, and certainly I had no reason to banish her. However she isn't the first reader to ask. What it comes down to, I believe, is your browser. If you suddenly find yourself unable to post a comment, it could be because you've either changed browsers or changed the settings on your browser. I'm not tech-savvy enough to suggest anything beyond that, but please be assured I don't (because I can't) banish anyone from posting.

Ah now comments, that's a different issue. While Don was moderating all comments during my absence with the flu, he told me he deleted a couple for very specific reasons I'll get into.

Please understand we cannot edit your comments from our end. If you drop in a bad word, we'll delete the comment even though it's otherwise interesting, simply because we're trying to keep a family-friendly blog here.

• Bad language. If I don't want my kids reading it (and yes, they read my blog) then I won't post it. Yes I've been known to drop a salty word or two on the blog as well as at home (cough), but that's my decision and I prefer mild language in all comments. We received a very interesting comment from a 16-year-old young man relating an incident at his high school in which he was relating the attitude of his schoolmates in some **'d out four-letter words. Obviously the bad language he referred to came from his schoolmate; nonetheless, we felt we couldn't post the comment. (If the young man is reading this, I urge you to post again; we really did enjoy your perspective.)

• Racist language. Another post came in which expressed an opinion using some derogatory terms easily interpreted as racist. I'm sure everyone understands we are not racist and prefer not to have such expressions on the comment archive.

• Language suggesting violence. Yes, there are times I'd like to set fire to some people, but I can get into a boat-load of trouble for "encouraging" or "inciting" such feelings by posting comments to that effect. So if you're suggesting a violent solution, don't be surprised to find your comment deleted. I have no way of knowing how many government goons are trolling this blog, and any hint of violence could be seriously misinterpreted. Savvy?

• Dirty jokes or links. In response to a post, a dear reader sent a link to a dirty website as something of a joke. I immediately deleted it. My kids read this blog and they sure as heck didn't need to follow that link. I know this reader's email address, so I sent him a note explaining my reasoning. He apologized for the momentary lapse in judgment and all is well, but it serves as a warning for future comments.

• Personal attacks. Oh my goodness, there have been times I've come thiiiiis close to deleteing comments from some readers who start slinging personal attacks directed at other readers. I tend to be a little more lenient with these comments, but only up to a point.  I welcome politely-expressed opinions from all ends of the political spectrum and would rather not have those opinions attacked. Polite disagreement is fine, attacks are not.

Phew. Hope this covers the basics!
Posted by Patrice Lewis at 5:22 PM