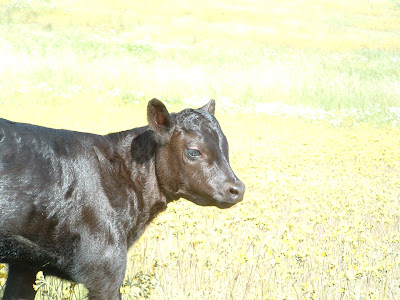 Unless you have polled cattle, you need to dehorn your calves. "Polled" is a genetic mutation that results in hornless cattle, a highly desirable trait because let me tell you - dehorning is a pain in the butt. And foot, and belly, and back, and arms, and anywhere else a thrashing animal can jab you.

We only dehorn our heifer (female) calves, not the bull calves. We steer (castrate) all our bull calves and put them in the freezer when they're two years old, so there's no sense wasting a good dehorning if all we're going to do is eat them.

But heifers grow into cows, and cows hang around for many years. Our two herd matrons have horns, and we wish they didn't. So we make it a policy to dehorn all our heifers.

For years, old Doc White came out and dehorned our heifers when they were less than six months old. Doc White was the beloved farm vet in this area. I know for a fact that he'd come out to our place, wrestle a calf into submission with hardly a blink of an eye, and administer shots, dehorn, castrate, eartag, or whatever else needed to be done, without hardly breaking a sweat.

But Doc White passed away a few months ago, and for several months prior to that his health didn't permit him to do large animal work. God almighty, but I hope Doc White is whooping it up in heaven right now because he sure made our lives easier here on earth. I miss him greatly.

One of the techniques used to dehorn a calf is to use a giant pair of loppers (for lack of better term). The blades of the loppers are half-circles, so when the blades come together around the horn base, in theory the torque of bringing the handles together chops the horn off. The bigger the horn, the harder it is to chop. Then after the horn is removed (and believe me, blood is involved) you need to cauterize the horn bud to prevent regrowth. The whole ordeal is painful and terrifying for the calf and not a whole lotta fun for the humans either.

Because of losing Doc White, we'd put off dehorning our heifer Ebony until she was about ten months old - BIG mistake, because this meant her horns were now about five or six inches long. And - no offense - we made another mistake by bringing in a female vet to do the dehorning. She was terrific - she showed my husband the place and technique to administer intramuscular shots to cattle - but she simply didn't have the nonchalant arm strength Doc White had when it came to dehorning.

A ten-month-old calf is a whole lot bigger and stronger than a younger calf. Suffice it to say, dehorning Ebony was a nightmare. A bloody, struggling, painful, noisy nightmare...and it left a scur (a scur is an incompletely-removed horn, which will grow back - and for some reason often curls around and grows into the animal's skull unless it's removed again later). The loppers hadn't been sharpened, which made the job harder. We'll never again use this particular vet for dehorning.

Additionally, poor Ebony now totally distrusts us. We've ruined this sweet calf's disposition by waiting so long and inflicting such pain on her. Never, never again.

So this time, with the birth of Raven last Sunday, we decided to try something new: dehorning paste.

Dehorning paste is just that - a paste you apply to a young calf's horn buds. It's a nasty caustic material which essentially burns the buds away and prevents them from growing. While this sounds cruel, I can assure you (if the calf's behavior is anything to go by) the pain is minimal and the results superb. We'd heard about this for years and are kicking ourselves for not having gotten some sooner.

Firstly, we could do it ourselves - we didn't need to call the vet (farm calls are expensive). However there's a fairly narrow window when the paste is most effective, when the calf is between three and ten days old. So on Wednesday, when Raven was three days old, we isolated her in the milking pen and gave it a go.

First we used clippers to shave off the top of her head where the horn buds were. We could see the small bumps under the surface of her skin. Then, while Don held her still, I used a popsicle stick to spread a thin, nickle-sized smear of paste on the horn buds. I was careful not to get it in her eyes, of course. She was calm during all this.

The toughest part was wrapping her head up in duct tape. My, how she struggled! We needed to put the duct tape around her so she wouldn't hurt her mama while nursing by rubbing the caustic paste on Ruby's udder. We made sure her ears were free from the duct tape, of course.

When all that was done, we pushed her out of the pen to her by-now frantic mama. How she sulked! She was tired from her struggles, too, which gave us a very drooping calf: 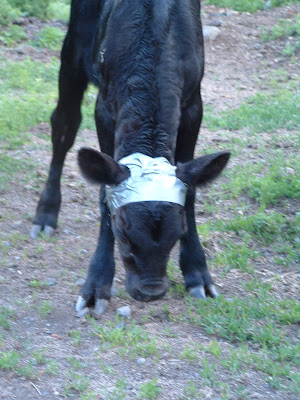 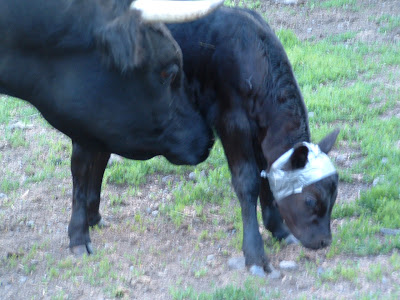 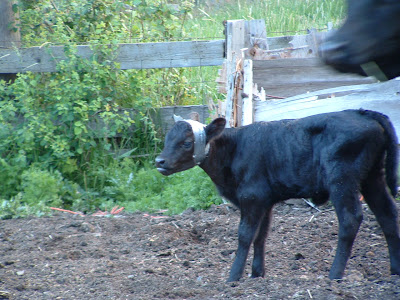 We removed the duct tape the next afternoon, and Raven's been bouncy and cheerful ever since. She'll soon forget the indignity of having us manhandle her as we did. There was little to no pain. No blood. It's over and done. Why the hell didn't we do this years ago? 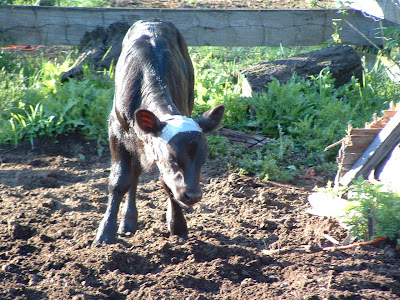 Talk about a dirty look! 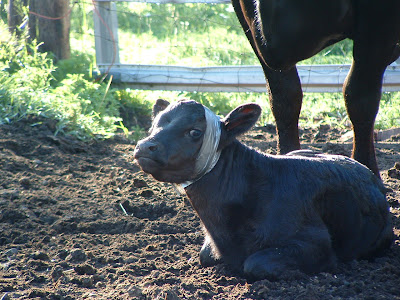 Posted by Patrice Lewis at 7:17 AM