It all started out so nicely. Matilda was bright-eyed. Little Thor was bushy-tailed. Everything was going well.

While cleaning Matilda's pen this morning, I noticed Thor kept nursing only on Matilda's left front teat. The left back quarter of her udder is dead (killed off by a bad case of mastitis two years ago) but the other three quarters work well. So why was Thor only using that one teat?

Ever mindful of mastitis, I walked around to Matilda's right side and squirted some milk from her right front teat. Clean pure milk, no sign of mastitis. So far so good. I reached back to squirt from her right rear teat.

I mean, no kidding - the teat was gone. It's like waking up and finding your right foot is missing or something. How does a significant body part just disappear?

And let me tell you, I looked. And groped. And felt. And groped some more. It was just...gone. It was freaky.

After kneeling in the barn muck and looking carefully, I determined that somehow the teat had been totally - and I mean completely - swallowed up by the turgid udder. Certainly that quarter was tight as a drum and hard as a rock with milk. But with the teat quite literally flush against the skin of the udder, how the hell was I supposed to milk her out and provide relief?

A little probing and I was able to get a stream of milk to come out, but without a teat to grab hold of, it was only temporary.

Okay fine. I knew it was time to start milking Matilda anyway - gotta keep vigilant for mastitis - but I wasn't planning on doing it right this second. So I finished feeding the livestock and waited for the rest of the family to get up so Don could help me clean out the items that had cluttered up the milking pen. We moved the heavy stuff that somehow got shoved there in the last few months (a sheet of siding, a bicycle, the log splitter, a friend's saddle, etc.) and I got all the accouterments together to milk. 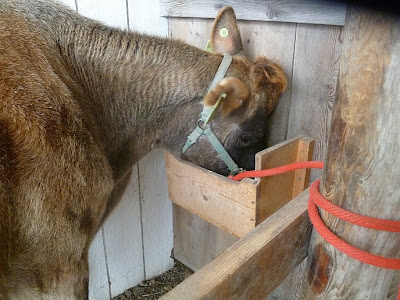 Okay fine. We decided to let Matilda and Thor loose in the driveway and give the new guy a glimpse of the watery sunlight we were having. He didn't want to leave the barn - it's a big wide scary world out there - but that was okay, mama was nearby. 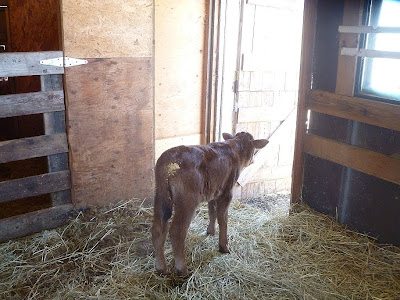 Meanwhile I had to figure out what to do about that inverted teat. I called the vet clinic that services the dairy herd from which we originally got Matilda. They've walked me through a number of issues in the past (notably the mastitis), and I continue to consult them because they specialize in dairy cows.

But when I spoke to a vet, he was clueless. Baffled. Completely mystified. In forty years of treating cows, he told me, he's never heard of this condition.

Oh great. Just what I wanted: to make veterinary history.

But he and another (local) vet suggested that I get hold a the largest syringe I can find, cut the sharp syringe part off, fit the body of the syringe over the teat, and use the plunger to create a reverse suction and try to draw out the teat that way. If nothing else, hopefully I can withdraw some of the milk that's making the quarter so turgid.

Trouble is, there were no such syringes locally.

I called our county seat (a 45 minute drive away) and found a vet's office that carried them, then called a neighbor who was in town and asked if she could stop and pick some up. Oops! She was in Coeur d'Alene for the day, not the county seat. Okay fine. I called the vet and canceled that order, then called around in Coeur d'Alene until I found some giganto syringes. Our neighbor kindly promised to pick them up for me.

In the afternoon a different neighbor stopped in to see the new calf and he pointed out something I had noticed but not realized the significance of: Thor had scours.

Scours is a stinky yellow diarrhea that can kill calves through dehydration within a day or two. Alarmed, Don and I rattled the internet searching for remedies and found that he apparently has a mild case. According to one website, "Calves that are scouring but remain bright and continue to suckle do not require treatment, however calves that are depressed and off the suck should be treated early to avoid calf losses and disease spread." Thor was certainly bouncing around the barn in bright spirits and nursing healthily. But we're keeping a sharp eye on him to make sure it doesn't get worse. 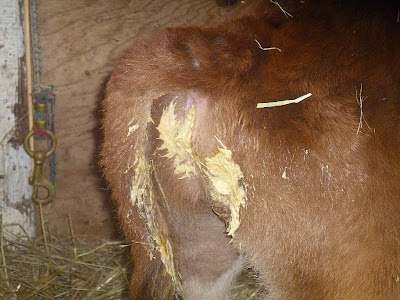 Meanwhile evening came and our neighbor still wasn't home with the syringes, but I needed to milk Matilda. As the daylight faded, I tied her head in the milking pen, but before I could block her in from behind she started backing out just far enough that I couldn't position her correctly to milk. She was distressed because her calf was out of sight. She was calm and unalarmed this morning when I milked her, but I guess the descending nightfall triggered her concern because she was fighting the tie and thrashing around.

Okay fine. I enlisted Don's help, we located a tiny halter which we slipped on Thor, then hooked him up to a lead rope with the intent of tying him near mama's head to calm her down.

But at least Matilda relaxed. Relaxed yes, but wouldn't move forward the step or two we needed to lock her in the milking pen. (Are we having fun yet?) It was getting dark and just then a car drove up our driveway. Our neighbor with the syringes please please please? No, it was Maid Elizabeth, the big sister of our friend Miss Calamity (who was visiting) come to pick Miss C. up and bring her home for dinner. So Maid Elizabeth got to see us in all our pushing, shoving, muddy, poopy glory.

While Don tugged Matilda's halter, Maid Elizabeth helped me shove her from behind until she took those two critical steps forward. I was able to get her locked into the milking pen, tie her back leg (so I wouldn't get kicked), and milk. But of course that back quarter teat was still totally inverted and I couldn't get anything out of it.

Meanwhile Thor, who was still not pleased to be dragged where he didn't want to go, backed into me and spread stinky yellow diarrhea all over the back of my shirt. (Are we having fun yet?) Nothing I could do about it, Don and I were already covered with mud and worse.

We finished milking and released all the animals back into the pen with fresh food and water. Don went back inside while I closed up the chicken coop and realized two chickens were missing. Sigh. (Happens almost every night.) I went and found a flashlight and searched their usual haunts and found them easily enough. I was able to catch one, but the other hen, loopy in the darkness, went on a befuddled chase around the barn until she finally found her way out and into the coop. I buttoned up the chickens and came into the house in a merry temper.

The house was a sty (which normally wouldn't bother me except I always get wound up tight as a drum whenever milking issues happen) so the kids scurried around putting things to rights while I tackled the kitchen.

Then I went up to check my email and found a little love-note from Don with a link to a Swedish a capella men's quintet. (I love a capella music.) Aww. (Sniffle.) I sure do love this guy. He knows how to unkink my knots. 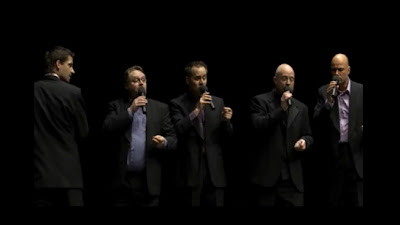 So to everyone who ever fantasizes about the ease and simplicity of country living, I hope this post corrects some misconceptions. It's not just gathering warm eggs and seeing baby calves being born. It's also about mastitis and cranky cows, stinky yellow diarrhea and mysterious teat conditions that baffle experienced vets.

But most of all, it's about a spouse who loves you enough to send you love notes when you need them. Because let me tell you, country living requires teamwork.
Posted by Patrice Lewis at 8:52 PM