Let's hear it for internet cafes!

I'm blogging this from an internet cafe here in Portland, OR, sitting opposite a dear friend (Wendy) with whom I'm staying. Looks like I have email AND internet! I won't be able to check things more than once a day, but at least I can get rid of the email spam as it accumulates rather than having 400+ posts piled up when I get him.

Here's a few photos of the trip, especially the bounty I see during this season of harvest. This field of oats as at the end of our road before I left town. 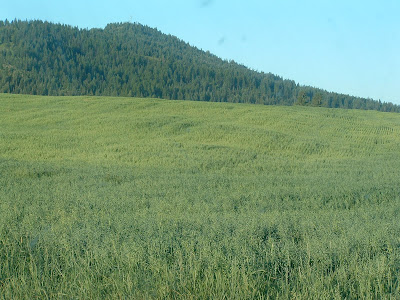 A tower of timothy. These are thousand pound bales. Rumor has it these will be shipped to Japan to feed cattle, including what becomes kobe beef. Not positive on this, though. 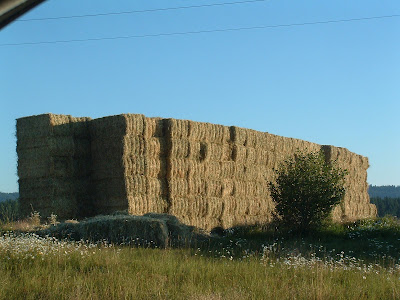 I stopped well outside the town of Palouse, WA to take these photos. The palouse, for those unfamiliar with this region, is a vast, mostly treeless area of low rolling hills in the east-central part of Washington. It's heavily cultivated with wheat, which is what you see here. Look at those rolling hills extending as far as the eye can see. 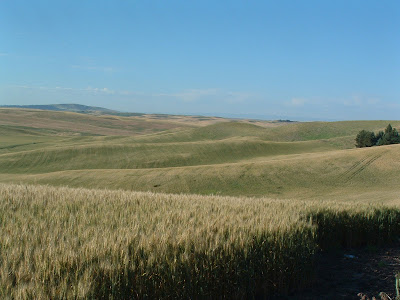 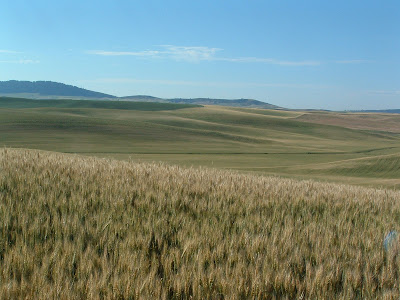 The grade going down into Colfax. For several miles preceding this grade, this signs were posted in order to warn truckers. 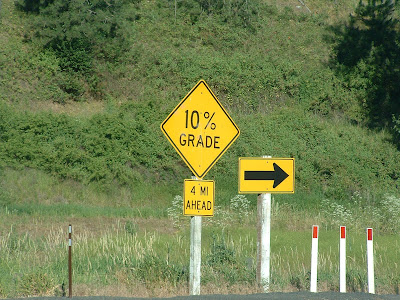 More wheat, with power towers marching into the distance. 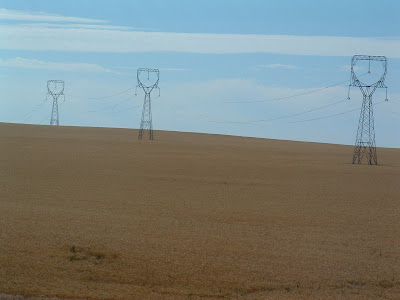 Once the palouse region is left behind, I drop through the Tri-cities area (Pasco, Kennewick, Richland) and then start following Hwy 84 along the massive Columbia River all the way into Portland. These massive windmills are a common sight in this gorge of eternal winds. 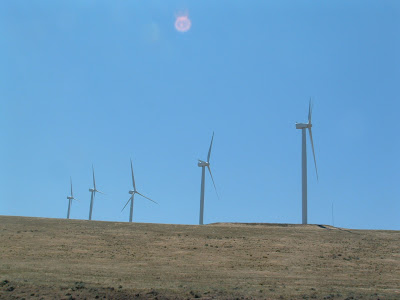 The Columbia River. Mere photos can't do justice to just how damned BIG this river is. 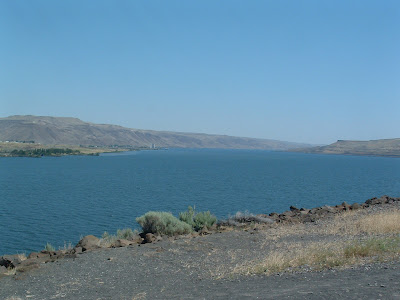 Photos taken through the windshield literally as I'm driving. What you can't see very clearly, way in the distance almost exactly centered over the highway, is Mt. Hood, over 11,000 feet hight. 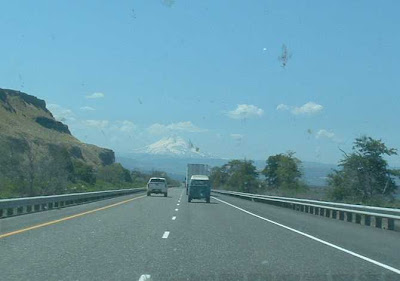 A small sampling of some of the cliffs that you can see along the Columbia Gorge. 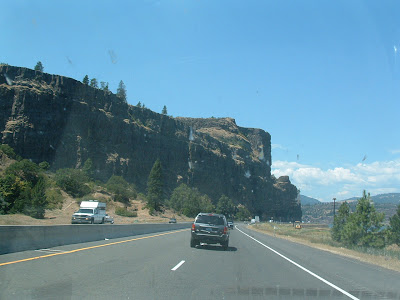 About forty miles outside Portland, the Columbia Gorge turns lush and green and is home to some of the most spectacular waterfalls on the planet. This is Multnomah Falls, one of the most dramatic sights I've ever seen - and it's literally right off the highway! The falls are in two parts - a drop of 542 feet for the upper falls, 69 feet for the lower falls. Spectacular. I lifted this photo off the Wikipedia website because I didn't stop this time (I was anxious just to push on to Portland), but I've stopped at Multomah Falls many times. See that beautiful bridge that spans the falls? When you set foot on it, you get blasted with wind (from the falling water) and drenched with spray. Feels great on a hot day. They have walking trails all over this area. Quite beautiful! 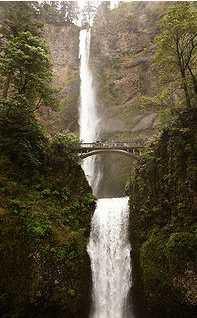 My friend Wendy's husband Tim will be working this retail show with me today and tomorrow. I'll take shots of Portland as I get them.
Posted by Patrice Lewis at 7:40 AM