Sunday was the last day of the event, and traditionally a much slower day. Sure enough, we only sold nine tankards. (That's okay, Friday and Saturday made up for the low numbers on Sunday.) It was very hot and I think that affected how many people came. But the music was good (unlike Thursday's musical selection which consisted of a lot of people screaming into microphones) and everyone seemed in a happy and upbeat mood.

Dancing dreadlocks. This fellow was a cheery and enthusiastic dancer. 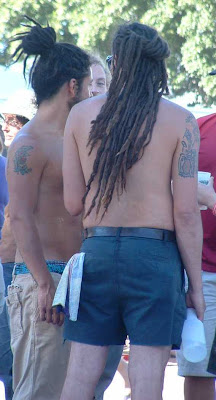 This colorful character was a Jimi Hendrix impersonator and about the nicest guy you'll ever meet. He's something of a street performer and makes a living posing with people for tips. The resemblance with the legendary guitarist is startling. 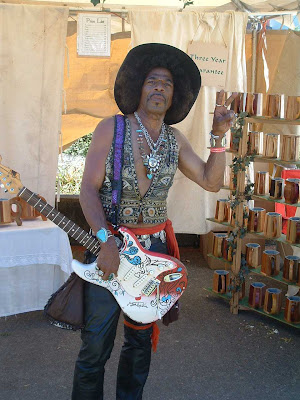 Here's Jimi with the "silver man" from a couple posts ago. The Silver Man, I found out, is also a street performer impersonating a robot, hence the silver makeup. It was HOT on Sunday so he must have been roasting. 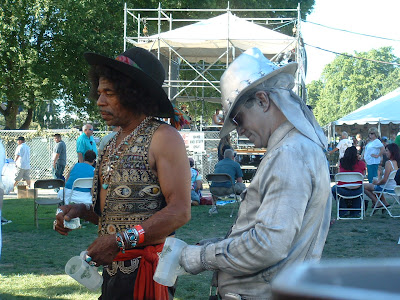 Here's Jimi posing for another couple... 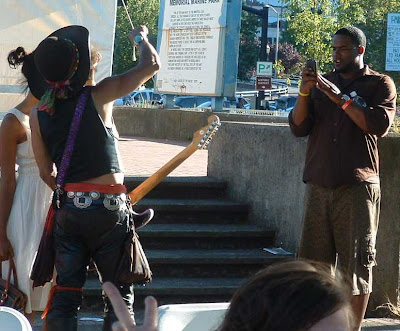 "Jimi's" real name was Richie, and he stashed his guitar in our booth when he wasn't working. 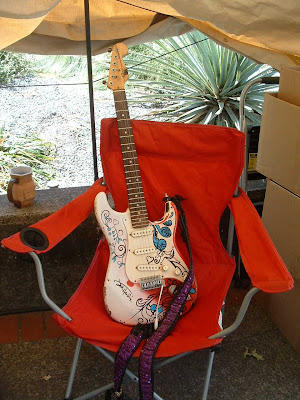 This blond bombshell sat at a table opposite our booth for over an hour. I don't know why I noticed her out of the crowd except to me she appeared to be deliberately, er, trolling... filing her nails, striking sultry poses, that kind of thing. 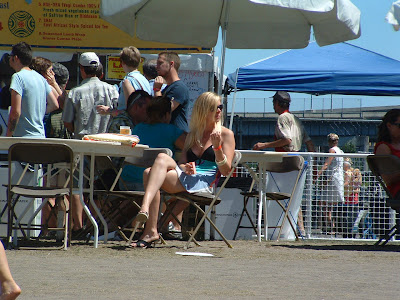 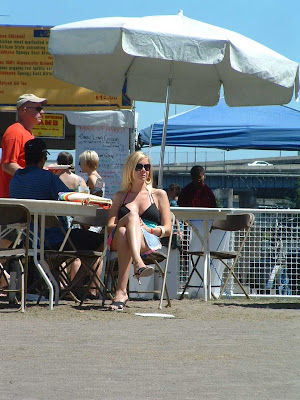 After an hour or so, it appeared she had some success. I got busy shortly afterward with some customers so I don't know what the outcome of the encounter was. 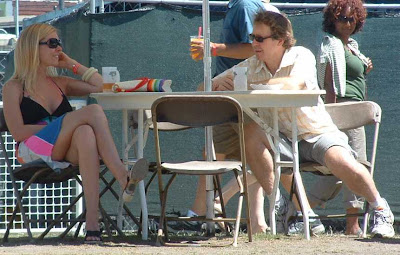 I love men in kilts. When this fellow walked into the booth, I asked for a photo. 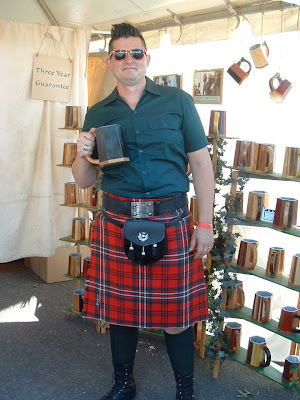 I never knew what a mullet was. I kept hearing the term but actually had to google it before I learned it was a style of haircut. Well, I actually say a man wearing a real live mullet. 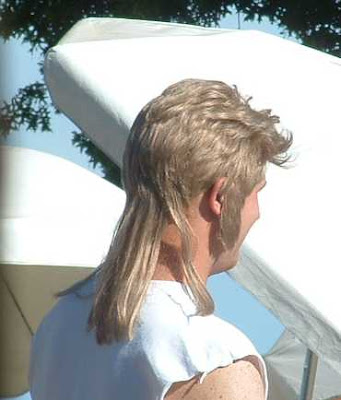 Impressed? I know I was. 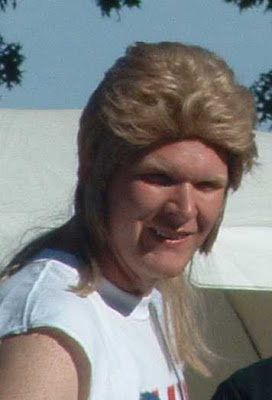 This seems to be a common style among younger men. I couldn't photograph too many men's butts without looking like a pervert (ahem) but trust me when I say this style was popular. I know wearing pants around one's ankles is done all over the country, but in our little podunk town in Idaho it's not quite as, er, blatant. 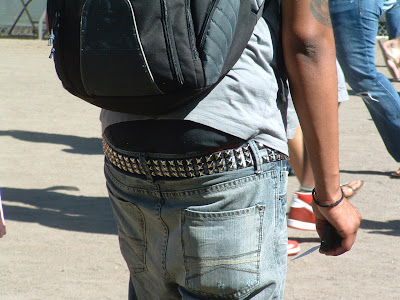 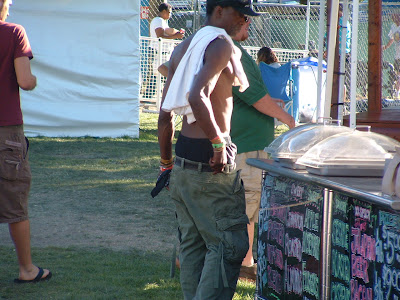 Of course men weren't alone in bizarre fashions. For some reason I got a huge kick out of women wearing high heels. Understand this event took place in a park. As in, grass and dirt. Why would anyone voluntarily choose to mince around in heels on rough ground? Go figure. (So says a woman who mucks manure for a living.) 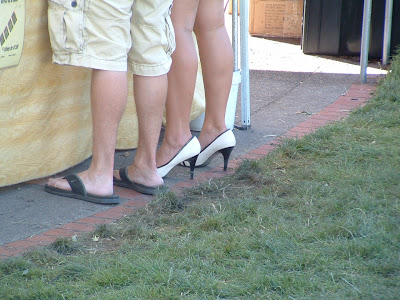 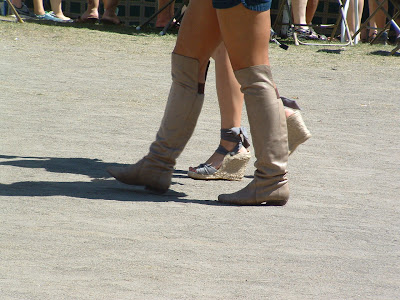 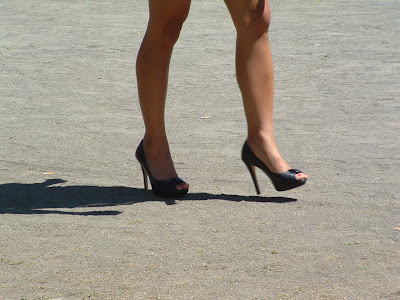 The last band to perform at this event was quite good. For nearly the entire duration of their set, this fellow danced. Just by himself. Off in his own little world. He wasn't overly lively, but what he may have lacked in activity he made up with sheer endurance. He danced and danced and danced. 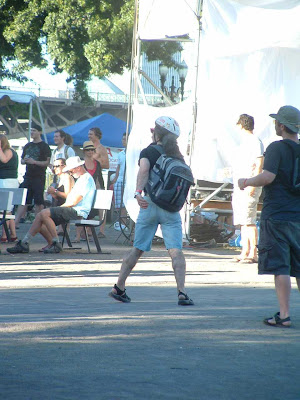 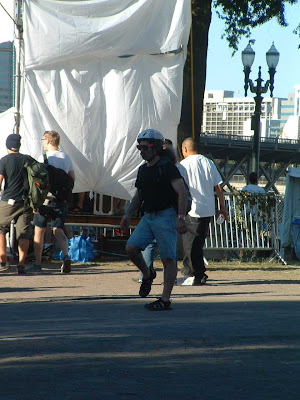 The last song of the entire event had a lively beat, and I watched this couple jitterbug. The woman wasn't quite sure of the steps, but boy howdy the man was terrific! What a pleasure to watch people have so much fun. 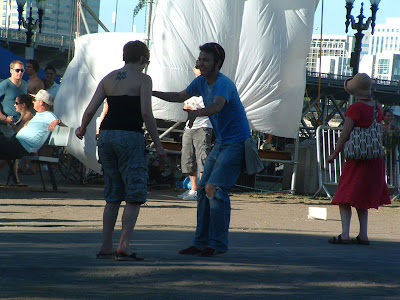 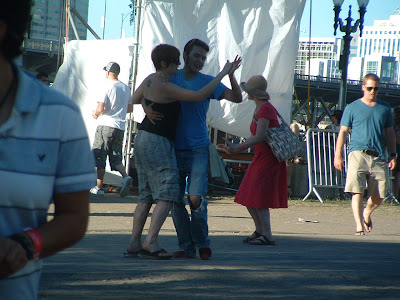 I came to this show not knowing what to expect in terms of sales because of the economy. I've been pleasantly surprised. Last year the mood was subdued - many customers expressed regret that they couldn't buy a tankard because they were unemployed, a state of affairs for which I have great sympathy. This year I didn't hear nearly as much concern about the economy. I don't know if Portland's unemployment rate has improved, but certainly the mood has.

Every morning my dear friend Wendy (also a writer) and I would go to an internet cafe and write. On the way we kept passing this neat old house on a corner, a house I've always admired for its shabby dignity (I love old houses). Well, they now have a tidy little chicken coop and chicken yard on the side facing the street. This morning I managed to snap a photo as I passed. I really like the recent development in urban areas which allow people to keep chickens. 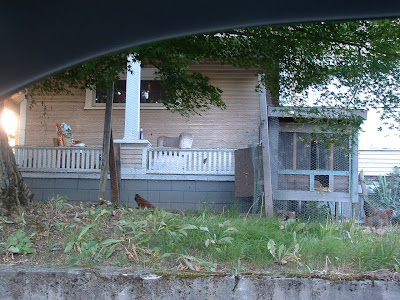 I was planning on dropping down to Eugene to visit another friend for a day or two, but I learned she was having car troubles in California and wouldn't be home after all, so today I drive home (where I'll have lots of emails awaiting my attention!).
Posted by Patrice Lewis at 7:15 AM