Another day in Portland!

We were late arriving to the event on Saturday, compounded by the fact that the drawbridge was up as we got onto the bridge to cross the river. The event is being held at the base of this bridge (on the other side, of course), so all we could do was wait. No problem by me - this drawbridge stuff never ceases to fascinate me. I took these shots through the windshield. 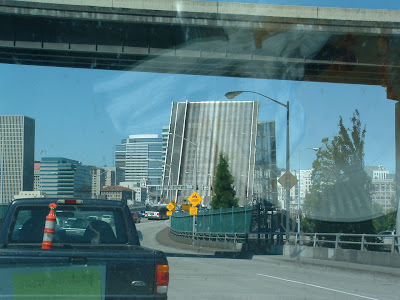 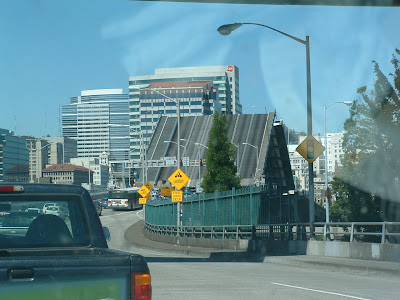 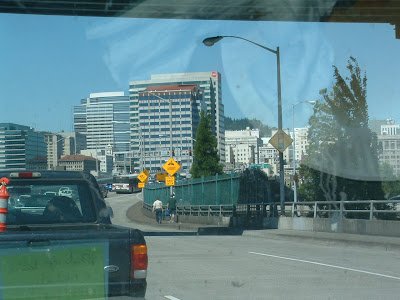 Later in the day I happened to be on the other end of the park, nearly under the bridge, when I saw the drawbridg lowering once again. Boy, this bridge must be up and down lots of times every day! 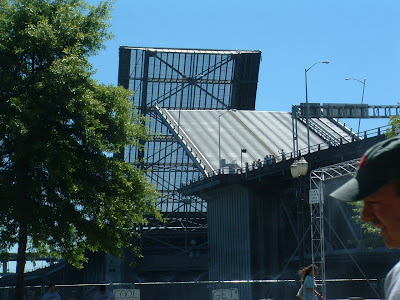 The park where this event is being held has some of the hugest oak trees I've ever seen strung along the riverfront. They have to be 200 feet tall. 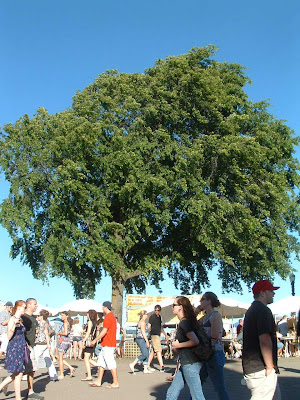 By the way, I saw a T-shirt the other day I really wanted to get a picture of, but didn't have a chance. It said, "Republicans for Voldemort." Portland is famously liberal so this sentiment isn't surprising. It was a hilarious T-shirt, though.

I apologize for the vulgarity of this shot, but I just couldn't believe anyone would come out in public dressed like this. She was no spring chicken either - I'm estimating she was in her 50's - which made her attire even more amazing. 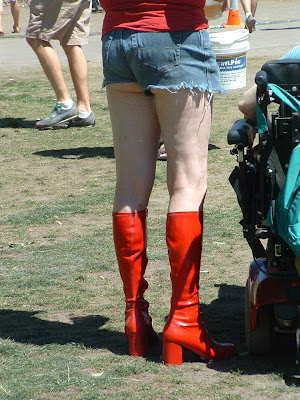 This guy had the most amazing dreadlocks I'd ever seen. They came down past his butt, and he wasn't a short guy! I kept seeing him walking past in the crowd (he was hard to miss) and kept trying to get a shot from far away. 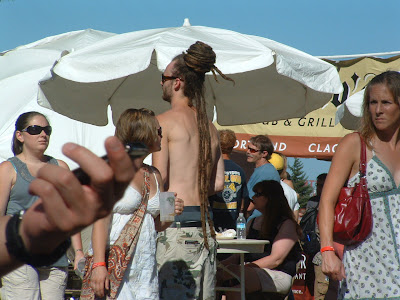 Finally he passed near the booth, so I ran out and asked if I could take a picture of his hair. He sounded puzzled when he replied, "You're the second person to ask!" I don't know why he sounded surprised, but there you go. 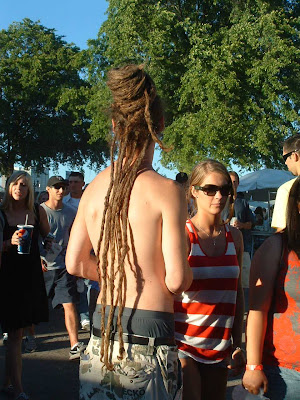 Another amazing hairdo. This guy had all kinds of people asking to take pictures, and he was happy to pose. In fact, he was astoundingly polite and friendly. You know how it is when you just instinctively like someone right off the bat? Well, I liked this guy. He was cheerful and obviously enjoyed the attention, and he seemed like a sincerely nice fellow. I wish him well in whatever line of work he's in. (I'm not being facitious - I honestly do.) 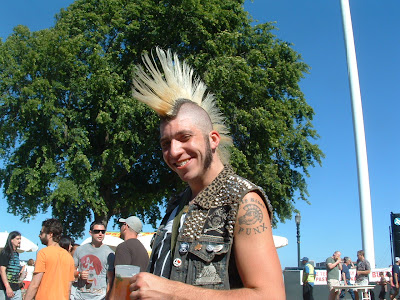 The one major thing that struck me six years ago when I first did this particular event was how many people have tattooes. No kidding, Portland has to be the most tattooed city I have EVER been in. I'm not exaggerating when I say that probably 75% of the people who come into the booth have tattooes, either large or small. 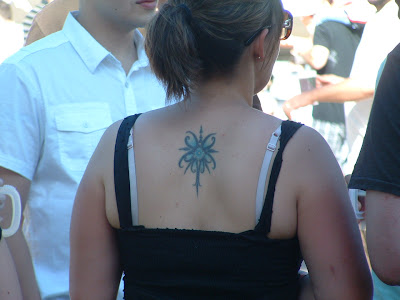 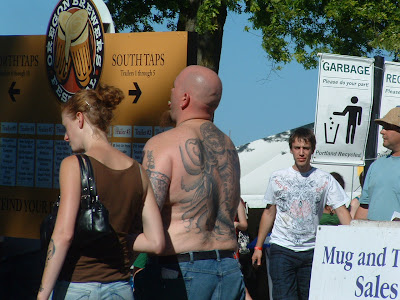 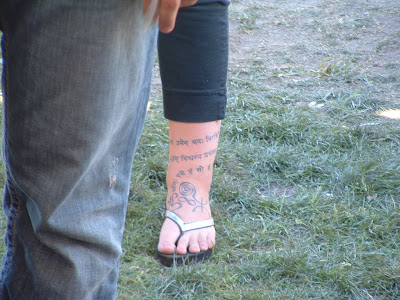 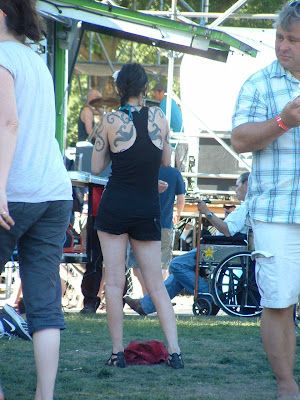 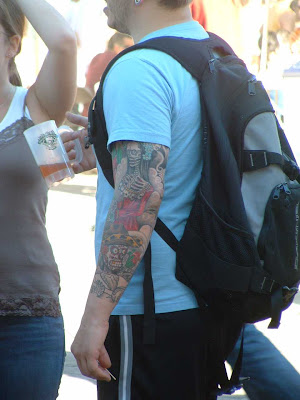 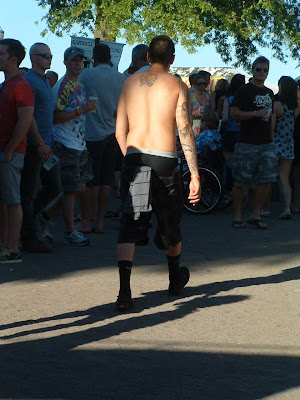 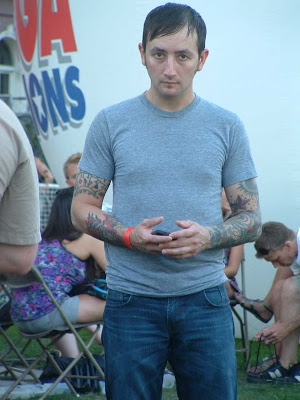 This guy's tattoo, of course, refers to the famous passage from Psalm 23: "Yea, though I walk through the valley of the shadow of death, I will fear no evil: for thou art with me; thy rod and thy staff they comfort me." When I asked why he had this particular verse tattooed on his arm, he told me how he and his buddy (also in the booth) had served two tours in Iraq, and the verse gave him great comfort during scary moments. I gave both men a discount on their tankards in thanks for their military service. They were such nice fellows, soldiers through and through - polite, friendly, clean-cut. It was an honor to meet these warriors. 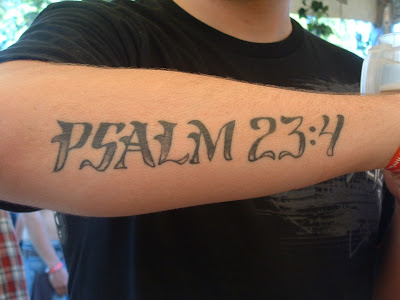 We sold 41 pieces on Saturday. Not as high as Friday but still much higher than I expected, so we were tickled pink. We kept removing shelves to make sure the remaining shelves looked full (a marketing trick - never have an nearly empty shelf because you'll never sell what's on it). Finally we removed an entire shelving unit and crowded the rest of the tankards on the remaining three units to make the shelves look full. Here's what the rearranged booth looked like. 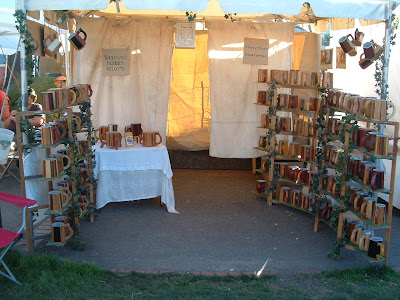 This band was billed as "A Tribute to Stevie Wonder," and let me tell you they were fabulous. Sounded exactly like Stevie Wonder. They had people dancing all over - I even saw a few venders bopping about, which was quite an accomplishment because it was at the end of the day and we were all uniformly pooped. 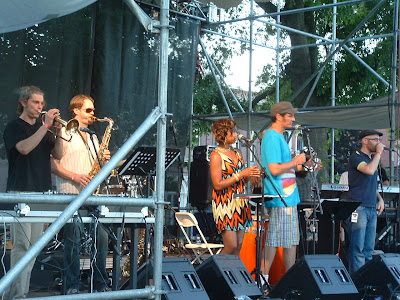 Believe it or not, this fellow is one of our oldest customers. He was walking past the booth at this same event last year, did a comical double-take, walked up to me, pointed a finger and said, "Egil's Tourney 1994, right?" He was referring to an event we did outside Eugene, OR back in 1994 when we'd been in business only a year. When I answered "Yes," he said "I still have my tankard and I use it all the time!" I was thrilled to meet such a satisfied customer. He told me it needed a small amount of repair, and promised to bring it by this year. Which he did! 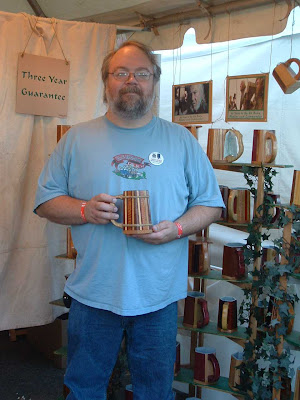 As you can see, the tankard is in terrific condition and just needs a touch of work. I had been telling customers about the durability of our pieces and this guy was living proof. I plan to enlarge these pictures and hang them in our booth next year to back up our claim. 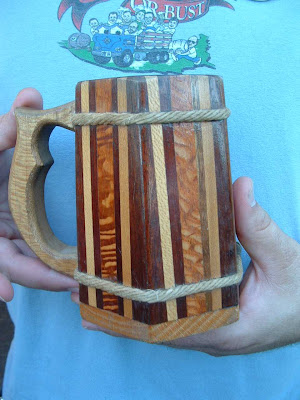 Here are a couple of delightful folks, Jay and Lisa, who had read my articles in Countryside Magazine and came by to say hello. It was right at the end of the evening and Security was sweeping the park to make sure everyone left on time, so unfortunately we didn't have long to visit. But they were terrific to meet! 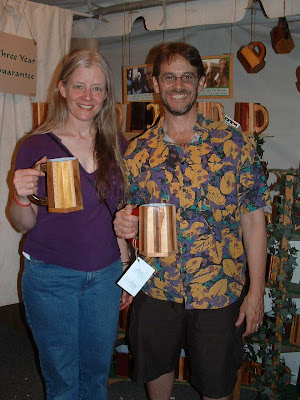 Posted by Patrice Lewis at 8:22 AM