I'm home, safe and sound! And a thousand thank-you's to everyone for their good wishes and prayers during my trip to Portland. I'm thrilled to report that we sold a total of 118 tankards during my retail event, a much-needed shot in the arm of income during an otherwise dry summer.

I took a number of photos on the way home, all of them literally by holding up the camera in the general direction of the object, clicking the shutter, and hoping for the best. I cropped and enlarged the relevant portions for clarity, but since these photos were taken through a windshield or side window at 55 mph, forgive the blurry nature.

A distant and none-too-clear shot of the Columbia River Gorge, through which I drove. It shows some of the mighty cliffs that edge this equally mighty river.

A hasty - and I do mean hasty - shot of the huge Multnomah Falls as I drove past. I could barely glance at it because traffic was slowed due to road construction and I had to keep my eyes on the highway to avoid hitting cones or construction workers. I'm surprised I captured even a glimpse of the Falls because it was purely a random shot. 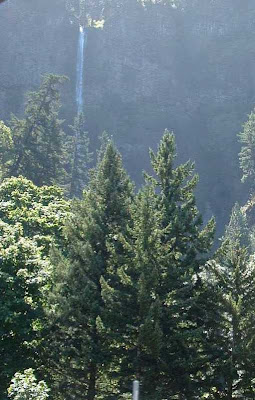 Cliffs, high and green, through the Columbia River Gorge. 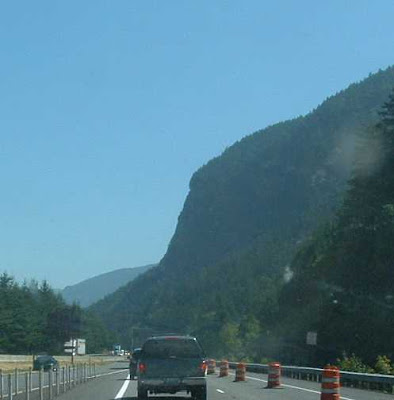 Near the center of the photo, the tiny white dot to the right of the larger white dot is the head of an osprey on a nest. This shot was taken so fast and so late that I'm surprised it came out at all. 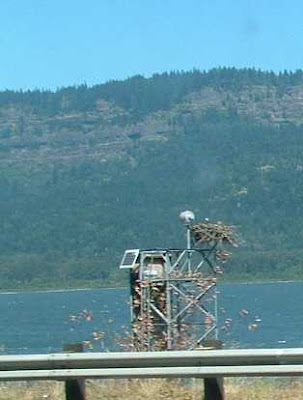 The cliffs are getting lower but are still verdant and green and clothed in trees. 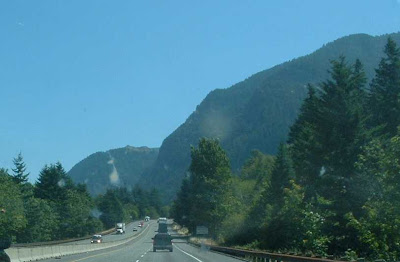 There's a tunnel along the way... 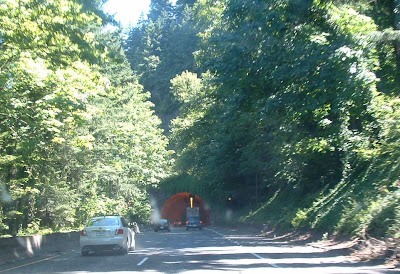 Inside, blurry and brief. 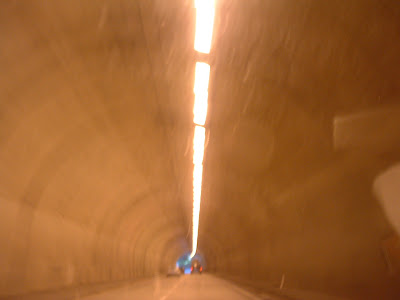 An impressive set of uplifted escarpments.

Still cliff-y, but it's flattening out and you can see how much drier it is along this loooooong (and boring) stretch of Hwy 84 heading for the Tri-Cities.

One of the hydroelectric dams along the mighty Columbia. If I remember correctly, this was the John Day Dam. Notice the line of huge windmills strung along the cliff top. 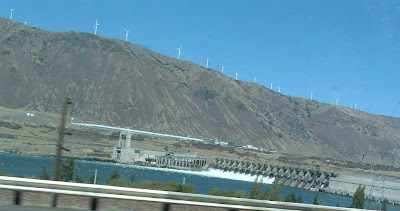 For those who like following maps, I hooked up to Hwy 385 in the Tri-Cities (Pasco/Richland/Kennewick) of southeast Washington, heading north. Eleven miles north of Connell (a prison town), I turned east on Hwy 26 which eventually took me through the lovely little towns of Colfax and Palouse until I hit the Idaho border.

See that tiny spec in the distance? That's a farm, with vast swaths of wheat in the foreground. It was about now that the deserts of northeast Oregon/southeast Washington give way to farming country. There were rich croplands in the deserts, but all were irrigated with water from the Columbia. These are dryland farms.

The Palouse with its rolling hills of wheat. About this point the car was having engine troubles. In high temperatures on long trips, there's something wrong with the fuel lines and I lose speed as I go up hills so I was creeping along on the shoulder of the road at about 35 mph with my emergency flashers on. The temperature was about 101F. I managed to limp into Colfax where I let the car (and me) cool down in the shade for about twenty minutes, after which it ran like a champ the rest of the way home. (And don't worry, we have an appointment to have the car serviced this coming Monday.) 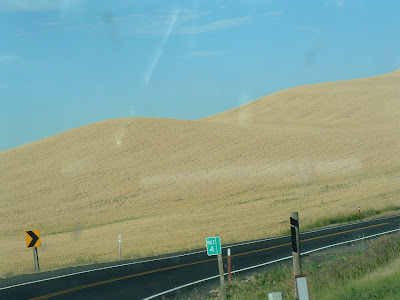 Welcome to Idaho! That was the sign I was waiting for. I would have stopped to take a proper picture, but as you can see from the reflection in the side mirror, some yahoo was following me too closely. 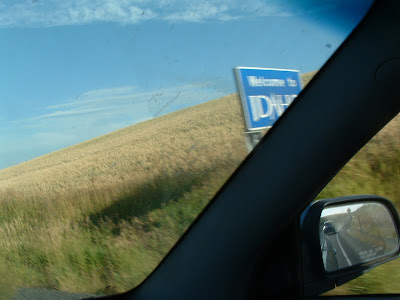 Hay bales on a hill. Ahhh, I must be home! 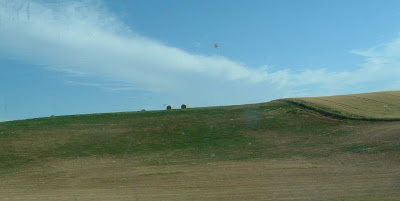 Today was spent doing all the mundane things one does after returning from a long trip. But oh it's good to be home!
Posted by Patrice Lewis at 8:58 PM