A day of great sales

I'm still here in Portland, selling our tankards at a large - no, make that huge - vending event. And oh my goodness, yesterday we had fantastic sales!!

Seriously. On Thursday my friend Tim and I sold 17 pieces, certainly nothing to sneeze at. Yesterday we sold, drum roll please, FIFTY-ONE PIECES. Couldn't believe it! We were dancing!

And pooped. Oh my goodness were we tired. Both of us had terribly sore feet and tired backs from standing on concrete all day. And this morning my voice is hoarse from talking the blessed day long. Half that time I was shouting above the noise of music, since the performance stage is only about 200 feet away from the booth.

But despite the very long hours - 11:30 am to 9 pm - this show really is delightful. 99% of the people who come into the booth are wonderful - charming, in a good mood, and having fun.

Here are a few photos from yesterday. These are shots Tim took through the windshield as we're crossing the bridge toward downtown Portland. It's a fantastic view and I've always wanted to get pictures of it, though the pictures don't really do justice to how impressive the downtown section looks. (It's even prettier at night, but obviously that would require holding the camera still enough to take a time-elapsed shot, which can't be done while driving over the bridge.) 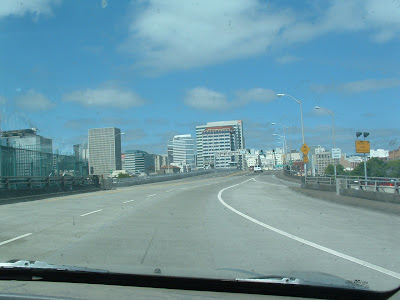 By the way, this is the same drawbridge that was up in yesterday's blog entry. You can see the white striped poles to either side of the road that come down to stop traffic prior to the drawbridge being raised. 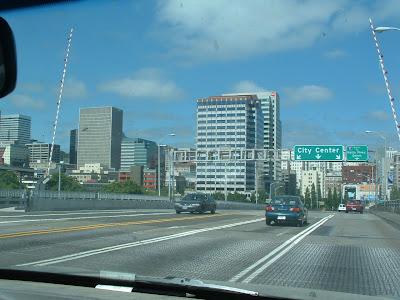 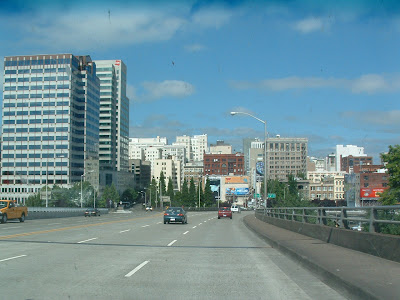 One of the bands performing on the stage had a fellow who played a didgeridoo, which is an intrument that sounds like a drone pipe. It's an ancient instrument developed by the Aboroginal peoples of Australia, and one I find fascinating and even beautiful. And this musician was good. He had several sizes of didgeridoos, for different tonal qualities, and sounded awesome with the band. 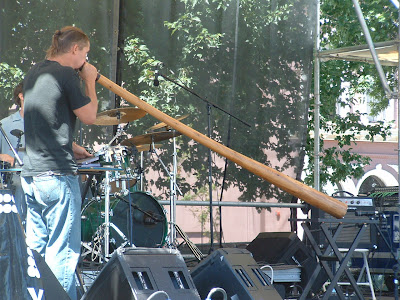 Here's a young lady who was off in her own little la-la world, dancing with a pair of hula hoops to this band. She was actually pretty clever with those hula hoops, twisting and tossing them and twirling around. 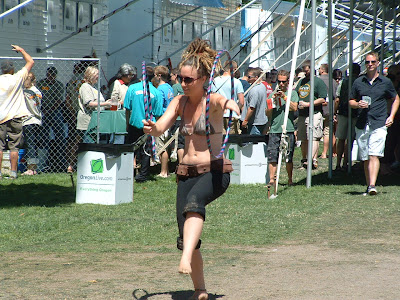 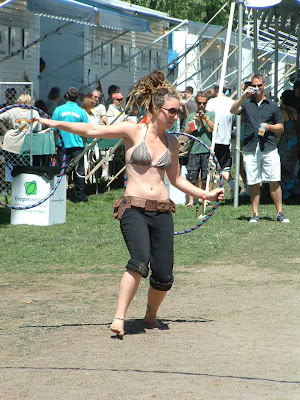 Here's a cheerful fellow who stopped to look at our booth. He was rail-thin and wearing tights and carried a huge rubber duck. Well, why not? 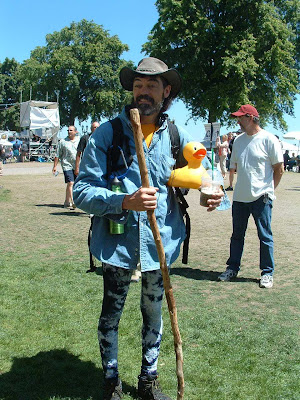 I saw this guy passing the booth, snatched up the camera, and trotted out to take a picture (obviously someone else was posing with him too). He was spray-painted head to toe in silver. And I do mean HEAD to TOE. His hair. His hat. Face. Hands. Clothing. Shoes. Side pouch. Everything. Why? No idea. This is Portland. If you have to ask, you wouldn't understand. (There's a popular bumper sticker here that says, "Keep Portland Weird." Don't thank him, he's just doing his part.) 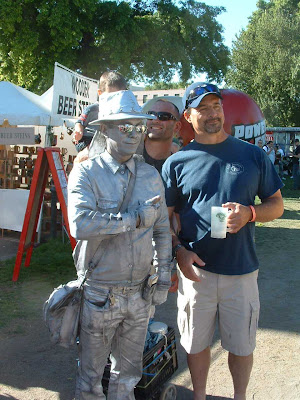 A man came into the booth with an enormous Rhodesian ridgeback service dog. He bought a tankard and hung it from the dog's collar. Looked WAY cool. 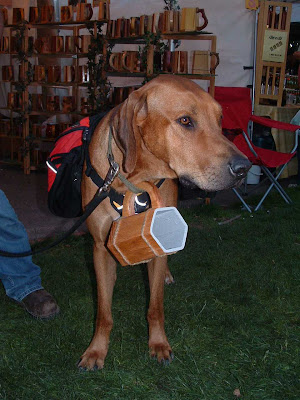 Thank you for all your prayers and good wishes for a safe trip and good sales. So far so good!
Posted by Patrice Lewis at 8:27 AM