Recently Older Daughter and I had a conversation about husbands. Specifically her question was, “How do you know you’ve found the right man?” I explained the importance of Red Flags and dating (courting) for at least two years so each person can see the other in a variety of circumstances, etc. We discussed the importance of having similar views on religion, handling money, and raising children. I told her some of the qualities I think are important in a husband.

Long ago I worked with a woman who told me some advice her father had given her as a teen. “If you want to find out what a man is really like,” he told her, “Spend an hour with him in rush hour traffic and then go home and see how he treats his dog.”

I thought this was rather comical but not especially realistic advice until, shortly thereafter, I witnessed my roommate’s boyfriend who would fight rush hour traffic to come see her and then treat her dog very poorly.

Rush hour traffic, as any commuter knows, ties people up in knots of frazzled frustration. How they treat their helpless and innocent dependents (i.e. dogs, children) after a bout of rush hour traffic says a great deal about their character. (To be fair, my roommate married the fellow in 1988 and they’ve been very happy. But he would not have been a match for me.)

I remember many years ago, shortly after Don and I got married, I received a troubled phone call from my younger brother. I was the first sibling in my family to get married, and so my brother turned to me as an “expert” on marital issues. He wanted to propose to his girlfriend, he told me, but how did he know she was the right one? How does one ever know someone is the right one?

Put on the spot, the best I could come up with was: “If you wouldn’t change anything about her, than she’s probably the right one for you.” In retrospect, it probably wasn’t such bad advice. (My brother and his girlfriend were married in 1994 and have a very stable and happy marriage.)

The whole idea of marriage is going into it with both eyes open. Although there have been happy exceptions, I tend to believe people shouldn’t get married before about 26 or 27 years of age, since by that time people gain maturity and can look beyond the superficial when it comes to choosing a life partner. Younger people tend to only see the handsomeness/prettiness of the other person. “He was rich and handsome,” a divorced and remarried friend once told me about her first husband. “I was eighteen and I thought, ‘What more does he need to be?’” The answer became painfully obvious after he started beating her. 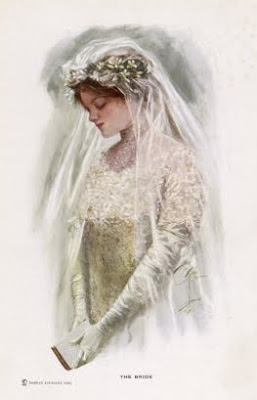 Being slightly older allows people to recognize and pay attention to the ever-important Red Flags. If someone has an addiction (be it drugs, alcohol, sports, spending money, whatever) then maturity allows you to recognize the Red Flags for the danger they are, rather than dismissing them as unimportant. I’ll say right now I know some extraordinarily mature young people whose prospects for a happy marriage are high because they’re smart enough to see what’s in front of their face; and I also know some extraordinarily immature older people who are likely to choose poorly because they wouldn’t know a Red Flag if it bit them on the butt.

But marriage, I explained to Older Daughter during the course of our conversation, is more than just picking the right person and having a pretty wedding. It’s all the years and years and years you’ll have to live with that person afterward. 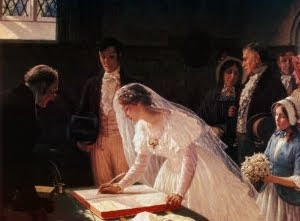 A great deal of what makes marriage successful is how a woman treats her husband. Since men are simple creatures and women are a whole lot more complicated, much of the nature of a marriage is up to the woman. If she treats her husband with love and respect and refrains from nagging or emasculating him, then the chances for a happy marriage are much higher.

Just some random thoughts on this gray winter day as we still wait for Matilda to have her calf….
Posted by Patrice Lewis at 9:27 AM

Email ThisBlogThis!Share to TwitterShare to FacebookShare to Pinterest
Labels: marriage