Of all the most longed-for hopes and dreams for serious Preppers, nothing is more wishful than a barnyard full of livestock. Chickens, cows, pigs, goats….whatever the species, the whole idea behind that dream is security. The security comes in the form of food that is perpetual. In theory, you cannot run out of food if you have livestock.

And to an extent it’s true. We don’t have pigs or goats, but we do have chickens and cows – and food security is definitely something they can offer. But with that security comes sacrifice. 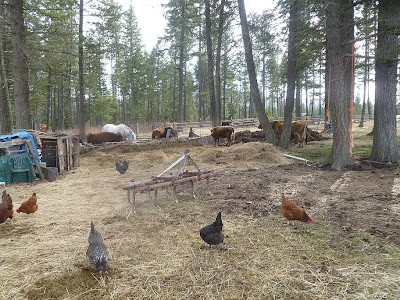 We have some dear friends in Oregon who very much want livestock. They want chickens and a Jersey cow or two. They want to be able to raise their own beef and make their own milk products. They have the acreage and the barn space. So what’s stopping them?

It’s the fact that they also want to travel.

And I will be the first to admit, livestock puts a serious crimp on one’s ability to leave home. The fact of the matter is, once you gain the security of livestock, you also take on the responsibility. A part of that responsibility means accepting limitations on your freedom.

Recently we (meaning, all four of us in the Lewis family) wanted to go visit these friends. They live just far enough away that it would require an overnight trip. At virtually the last minute we had to cancel because we couldn’t find anyone to house sit for us. House sitting for the Lewises is a complicated business. Besides keeping our dog Lydia from attacking our dog Major (they conflict while in the house), the current list of chores consists of:

• Feeding and watering the chickens morning and evening
• Taking a head-count of the chickens before buttoning them up for the night (and, armed with a flashlight, hunting up any stray chickens that didn’t make it into the coup)
• Feeding and watering the livestock morning and evening
• Caring for Matilda (our Jersey) and Thor (her new calf), which are apart from the herd
• Working Thor on his lead-rope two or three times a day 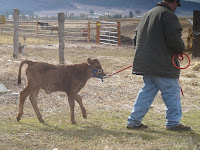 • Mucking out Matilda’s pen (removing the soiled hay), dumping the old stuff in the manure pile, and spreading clean straw on the floor of the pen
• Milking Matilda morning and afternoon
• Straining and chilling the milk
• Feeding and watering the barn cats
• Keeping the woodstove going (unless you want to freeze)
• Et cetera ad nauseum

Anyway without a house sitter available, the visit to see our friends fell through. The girls and I later went on the overnight trip by ourselves, leaving Don home to mind the beasties. In a couple months, Don and the girls will go visit our friends and leave me home to return the favor.

Such is the nature of owning livestock. As a family, all four of us haven’t taken a trip together in over a decade. Business or pleasure trips always require one of us to stay home and mind the farm.

For some people, this is a deal breaker. Not take a family vacation every year? Impossible to contemplate!

But major trips aside, it’s the day-to-day upkeep that livestock require that can seem the most intimidating.

In some ways we have it easy. We work at home. We school at home. We don’t have to deal with commutes and overtime and school buses and other scheduling difficulties. Barn chores become part of the daily routine. But barn chores must be done, and done daily. 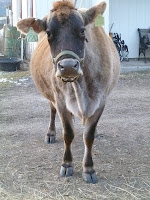 But it’s not all hardship. After all, we have our livestock for a reason, and those reasons are a big payoff for the limitations on our freedom. The livestock are an integral part of our “prepping” efforts – even before we were Preppers.

Prepping without livestock is rough enough. Prepping with livestock means some additional things to think through. We’ve have to “prep” for the needs of the livestock in addition to our own needs.

For example, we have a large number of mineral blocks we’ve stashed away because livestock need trace minerals as well as salt. We stockpile usable fencing materials as we find them. We’ve looked into ways to keep the stock tanks from freezing in the winter if we’re deprived of electricity (which powers the heating coil in the tank heater that keeps the tanks ice-free). We’re anxious to grow wheat and corn to grind and mix together for chicken feed. We are looking for ways to hand-harvest (if necessary) sufficient amounts of grass hay to last our animals through a harsh Idaho winter. (Scything 25 tons of grass hay by hand? Now that's an intimidating prospect!)

So should you get livestock? Assuming you have sufficient space to put them, my answer is: Yes and no. Yes if you can commit to them. No if you can’t.

Like everything else associated with Prepping, it’s best to practice and know what you’re doing with livestock before a “bleep” scenario. If you want to get cows or goats or pigs or chickens in order to survive a catastrophic situation, get them sooner rather than later so you know all the good, the bad, and the ugly associated with owning livestock.

It’s all fine and good to say you want a cow after seeing pretty pictures of Matilda and all the foamy creamy milk she gives, but do you know how to milk a cow? Deal with mastitis? Hobble? Lead? Halter? Do you even have hobbles, leads, and halters (in various sizes)? See my point? You won’t know what you need until you get the animals and start learning. And the time to start learning is NOT post-bleep. 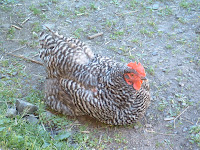 Sometimes you just have to DO IT. I clearly remember when we got our first Dexter cow/calf back in 1998. I remember looking at the cow and thinking, “Poor thing, you don’t have any idea that I’m totally ignorant of how to take care of you.” Interestingly, I had the precise exact same thought when holding my newborn Older Daughter – an overwhelming sense of “Oh bleep, what have I gotten myself into?” Livestock, like parenting, is something we all learn on the job. All the books in the world won’t help unless you practice as well.

Believe me, I would not discouraging anyone from getting livestock any more than I would discourage anyone from having kids. If you have the room for animals, give it a try. If you want animals badly enough, then I’m confident you’ll learn what it takes to feed, shelter, and care for them.

The rewards of owning livestock are both tangible and intangible. For example, now that I’m milking Matilda again, I just made ice cream using fresh milk, fresh cream, and fresh eggs. For lunch I had some leftover pot roast from the steer we butchered last year. For tomorrow’s dinner I’m defrosting a chicken we butchered last year. We have literally tons of composted manure awaiting spring when it will be spread over the garden and worked into the soil, ready to feed our vegetables. 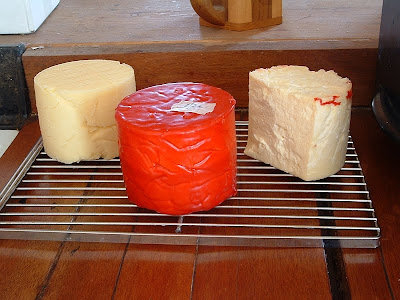 Our animals give us milk, meat, eggs, and manure. Those are the tangibles. But they also give us a great deal of intangibles – namely security and yes, enjoyment. On a summer evening, I love nothing more than to take a glass of wine and a good book and sit outside among the chickens (“communing with the chickens,” I call it). I love watching the calves gambol in the pastures in warm weather. 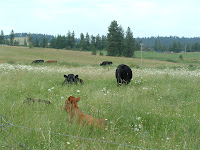 I love milking Matilda, even when it’s muddy and cold. I love the sense of security that comes from knowing how to care for and harvest our animals’ resources.

Maybe it’s because I’m a homebody at heart anyway, but I like living with livestock. I’ll never become a world traveler, but that’s okay. It’s a tradeoff I’m willing to take. And if the bleep hits the fan, we will still have meat, milk, and eggs.
Posted by Patrice Lewis at 5:02 PM