It's been said that homeschooled kids are more civic-minded and do more volunteer work than publicly-schooled kids. I don't know if that's true or not, but I do know my girls do their share of civic volunteering.

About a year and a half ago, we lost our house cat. It was an unpleasant blow to my cat-loving kids, and they immediately began lobbying for a replacement (or two).

Trouble is, we have dogs who don't like cats. So another house cat is out of the question until we have different dogs.

So, faced with a dearth of purring, my girls decided on the next best thing: volunteer at our county animal shelter. 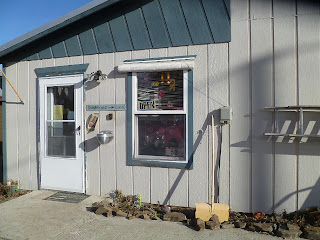 Like many shelters, this place runs on a shoestring budget and is always looking for volunteers. When I first made arrangements over a year ago, the director was hesitant to allow two such young kids to work without me (the parent) present. (The rules are: volunteers under 15 require a parent to be present.) I had no problem with this; I was happy to sit in the lobby with a book or my AlphaSmart while the kids worked.

But in something under a week, the director changed her mind.  She had never worked with homeschooled kids before, and couldn't believe their work ethic and maturity level. Over the past year my girls have brought in underage homeschooled friends for a stint of volunteer work (such as our neighbor Miss Calamity), and the director has been delighted with them all.

Up to this point, most of the volunteer help the shelter's staff has gotten comes from teens who are required to put in community service for some sort of legal transgression. (As you can imagine, they're not always the easiest bunch to work with.) And we know a few other publicly-schooled kids who love animals and who also volunteer. But as far as I know, my girls are the longest-term volunteer help the shelter has ever had. My oldest daughter recently was invited to submit her résumé to our local library for a possible part-time position, and she was able to use the animal shelter's director as an enthusiastic reference. So starts Older Daughter's professional credentials.

So it's been over a year now, and every Wednesday we make our trek into the county seat where I drop the kids off for a couple of hours. They clean cages, launder bedding, wipe down and disinfect litter boxes and walls, and generally give the hard-working director and her staff some help. The main reason the kids have continued working for so long is they just plain love cats.

Some of the cats hang out in the lobby: 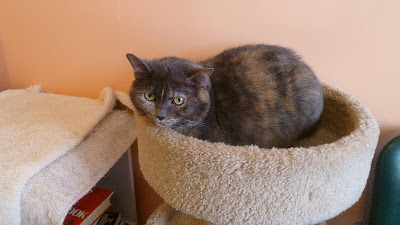 Others are in rooms separated between adults, adolescents, and kittens. 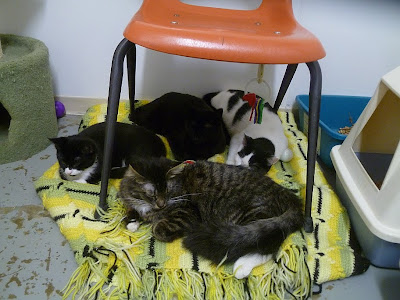 Fortunately - and especially as volunteers - the girls are given lots of time to just play with the cats.

This guy is a favorite, though he was born without one front leg (he was hard to photograph). 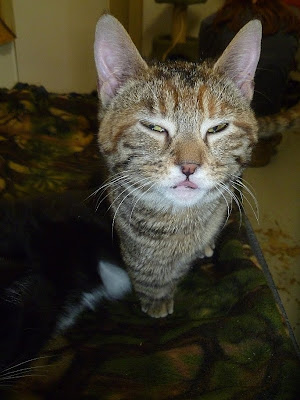 The rooms have all sorts of cat climbing apparatus. 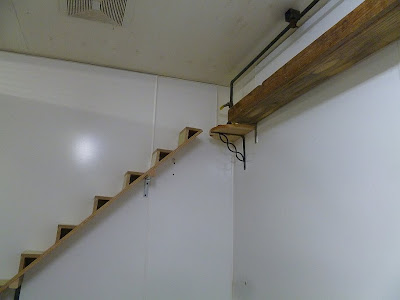 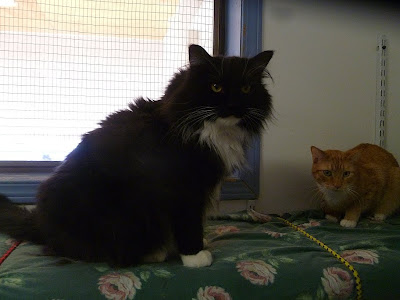 The girls nicknamed this cat Uncle Mike after my older brother, the classic nerd. The girls think the cat has a classy "nerd" look. 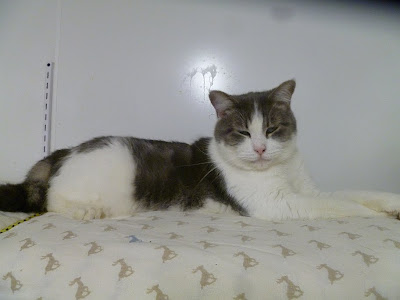 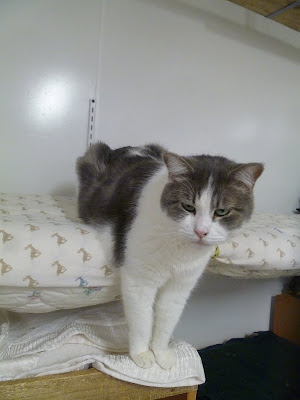 This shy fellow was curled up out of sight. 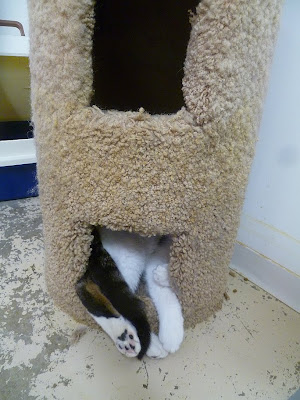 The director was giving this cat a flea bath (the cat was NOT amused). Fleas, as you can imagine, are something the shelter must constantly battle against. 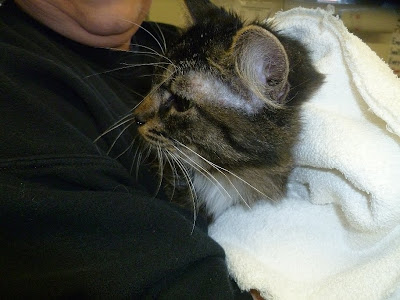 I don't know how long the kids will want to work at the shelter, but they've shown no signs of losing interest. Either way, I'm proud of them.
Posted by Patrice Lewis at 8:16 AM