Poor Thor didn't have a very good day. That's because we castrated him today.

(I'll pause while all the male readers wince in sympathy and cross their legs.)

For obvious reasons, it's best to steer a bull calf when he's very young, but they have to be at least a few days old to allow time for the testicles to fully descend. We used to have the vet do the castrating (surgically - without anesthesia - not overly pleasant for the poor calf - men, you can leave the room if you want) but we finally wised up and bought an emasculator.

This handy and inexpensive little device is nothing more than a gizmo that spreads a tight rubber band over the top of the calf's testicles. It takes literally five minutes or less. 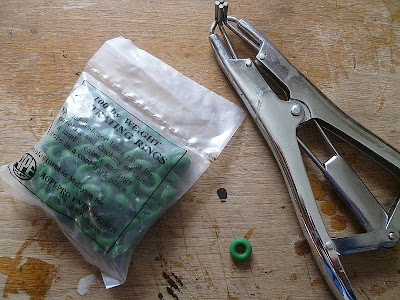 The rubber band is slipped over the prongs... 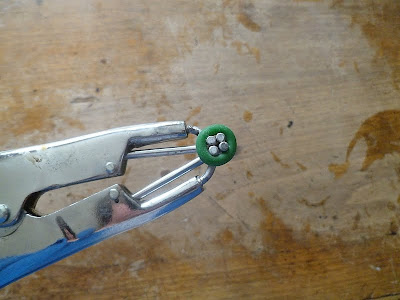 ...and then when the handle is squeezed, the band opens wide. 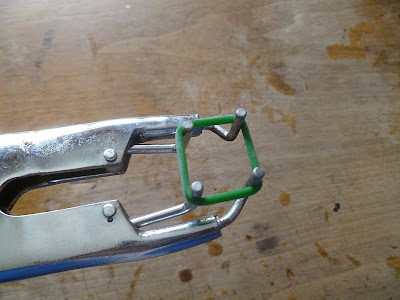 So this morning we pulled Thor into the pen. 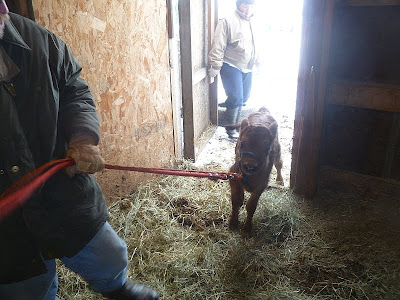 The little guy was suspicious. (With good reason.) 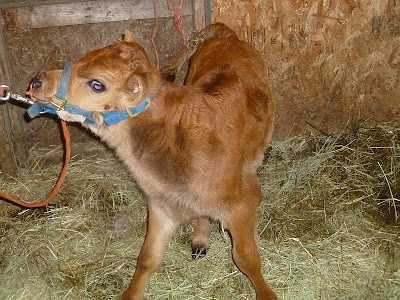 It's a two-person job, but since the calf is so young (and used to being handled) it wasn't terribly traumatic for him. A simple matter of gently slipping the testicles through the band... 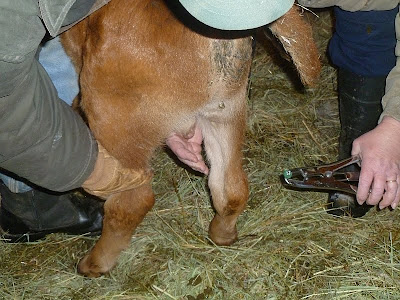 ...and carefully releasing the handles of the emasculator so the band tightens over the neck of the testicles.

That's it! No struggles, no blood. Of course poor Thor walked around for the rest of the day with his tail slightly raised and his back legs a little bit apart. Doubtless it's terribly uncomfortable, but hey, we don't need another bull around the place. 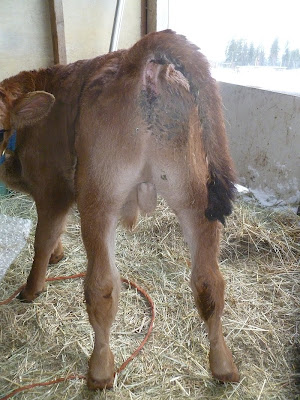 Deprived of their blood supply, the testicles will wither and dry up, and should fall off within about two weeks.

We were going to dehorn Thor this evening, but the poor guy's been through enough for one day. We'll wait a couple days to let him adjust to the new sensation.
Posted by Patrice Lewis at 4:48 PM