I had my makeup session and photograph taken today for the book cover! Boy am I glad that's done.

I certainly got myself worked up about it too. I went to bed late (working on my WorldNetDaily column, which is due at noon on Fridays) and then woke up - poing! - at 4 am and couldn't get back to sleep. Toss turn toss turn. Okay fine, I'm up.

It was a busy morning - finish the column, release and feed/water the chickens, feed the cows, release Matilda and Thor, muck out their pen, milk Matilda, strain the milk, skim yesterday's milk, review the column with Don, revise and review column again, hyperlink the column, then drive 1.5 hours into Spokane and wind my way through the downtown section until I found the salon. (My appointment was at noon. I was five minutes late.)

Thankfully the salon wasn't nearly as intimidating as I'd imagined it would be, and it was full of nice ordinary people - a woman about my age getting (I think) a perm, and an elderly woman having her hair styled. My hair and makeup person was named Melanie, and she was large and cheerful and very easy to talk to. (She also had TWO cheek studs - those aren't dimples - and arms covered top to bottom with bright tattoos, which took a little getting used to.) 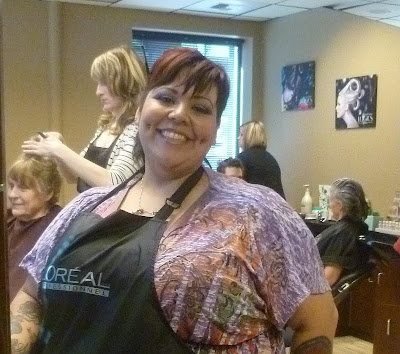 Melanie wasn't quite sure what to do with long hair (my hair is about waist-length though very thin) and offered to cut it to shoulder-length, which I declined. So she sort of swept it into a bun not too different than I normally wear but somehow managed to make it look much sleeker and more professional. She did something magical with my bangs and actually made them look...well, good. 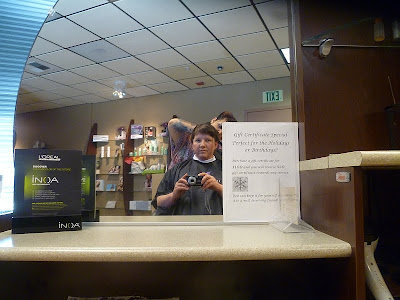 And then came the makeup. Did you know that some makeup is applied with an airbrush? Honestly, it's a little compressor (a miniaturized version of what we use in the shop to spray the outside of our tankards) and she told me to close my eyes and literally sprayed a light foundation all over my face, including ears, neck, forehead, etc. This was to even everything out.

Then she opened what looked like a modified fishing tackle box chock-full of makeup and started selecting items. She was like an artist preparing her paints...which, come to think of it, she was. 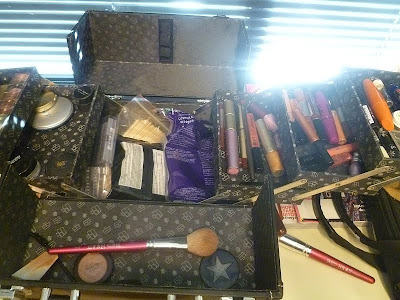 But in the end, it worked! My greatest fear was that some eager young makeup artist was going to try and make this 48-year-old woman look like a funky twenty year old. Nothing doing. Melanie clearly had experience working on country bumpkins like me. She put the makeup on thick - this was for a high-resolution photograph, after all - but not to the point of exaggeration. I couldn't have been more pleased.

Then it was a short walk to the photographer's studio. This was a solo enterprise run by a youngish fellow named Tony who was a third-generation photographer. He worked out of a nifty old retro building with brick walls. I didn't get many photos of the studio because he got right to work adjusting lighting, pulling backdrops up and down, tweaking those giganto light diffusers (or whatever they're called). He was very precise about the way shadows fell and would move a lamp a couple inches to give the background a subtle difference. Talk about a professional! 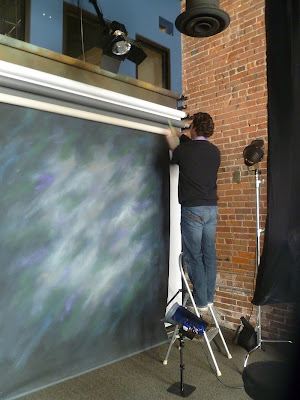 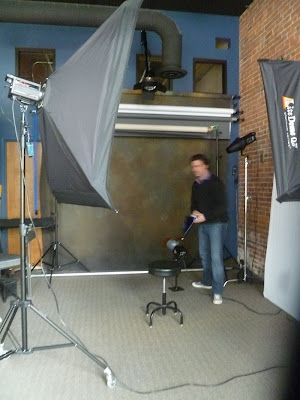 The photos themselves were very simple. I sat on a triangular stool with an arm in front on which I leaned (the pose apparently lengthens the neck and make the subject look less cramped and stiff). Tony took about fifty photos, virtually identical except for minute changes in pose - move my head a quarter inch, drop my chin slightly, etc. I kept wondering how on earth such tiny changes in pose could make any difference, but to my surprise it did (I saw a few of the photos).

He divvied the photos up into about thirds: one-third with me looking serious (not smiling), one-third with a sort of close-lipped half-smile, and one-third with a bigger smile. Toward the end of the session he put a filter on the camera that "softens" the picture, so those shots are now in the repertoire.

I didn't get to see all the shots, of course. He said he would download the photos and over the weekend send them simultaneously to me and to the publisher. Between us we'll decide on the most flattering photo.

Driving back through downtown Spokane, I saw this sign and had to take a picture. 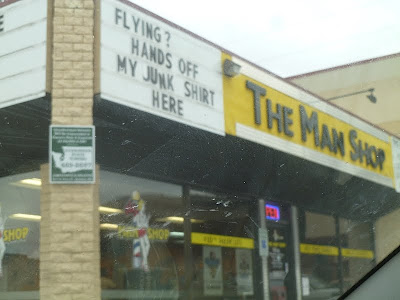 And once I got out of the city, I passed my preferred kind of scenery: a barn reflected in puddled water. 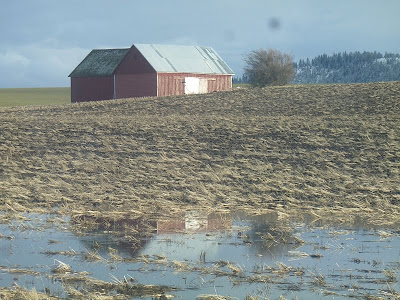 So that was done! I came home and did some barn chores and did some lead-training on Thor and felt much better. But Don wouldn't let me shower off the face paint until he got some shots of me in front of Matilda's pen. 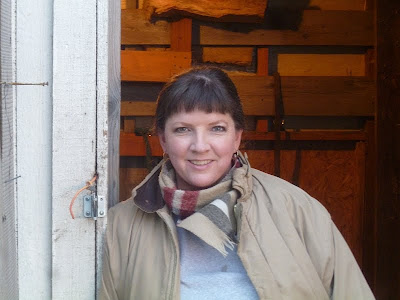 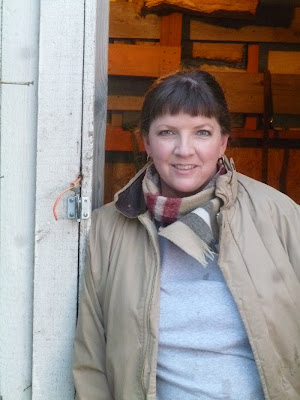 What an experience. I'm glad it's over! Now if you'll pardon me, I need to jump in the shower and scrub all the face paint off.
Posted by Patrice Lewis at 7:09 PM