Are they men or are they louts?

In an interesting coincidence, just after posting In Praise of Men I saw this article on how Louts Are Taking Over the Planet.

This article examines a breed of men which the writer apparently comes across with great frequently but whom I (fortunately) seldom encounter: the lout. And he laments that young men are emulating louts and therefore louts are growing in number.

"The male image has gone through all sorts of transformations, especially over the last 50 years when feminism evolved and obligated men to adjust to the new circumstances of coequal women," writes author Neal Gabler. "The old strong, silent type, essentially a breadwinner and breeding stud, gradually gave way to the sensitive male, the engaged male, the homebody male who shared child-rearing and household duties with his wife...Of course, some men found this emasculating and actively resisted the process. Some tried to laugh it off. But culturally speaking, there may have been a less overt resentment that has been simmering for a long time and that may account for the recent eruption of the lout. He seems to be a form of passive-aggressive revenge against what some men see as the indignities feminism has forced upon them — indignities that have been exacerbated by economic hardship."

The author points out how Louts are not tough capable men able to rebuild car engines in a single bound. Nor are they sophisticates who know their way around a wine menu. Instead, he defines a lout as "someone who is proudly stuck in a kind of adolescent parody of manhood that conflates insensitivity and machismo." 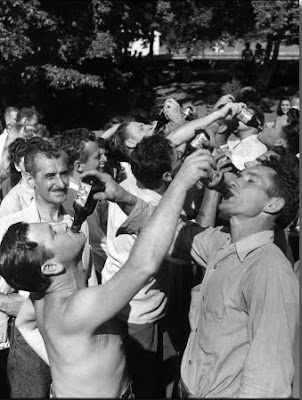 So -- do you know any louts? Or do you know more Men (capitalized) than louts? I'm sure they're here in rural America, but I've never come across any I could truly call a lout.

On second thought, I met one once. Nasty fellow.
Posted by Patrice Lewis at 7:37 AM