In praise of men

I'm just to the right of conservative and tend to adhere to traditional labels and values, but I have to admit I bristle at being called "simple" while women are considered to be "complex." And "simple" usually means "sex, food, and admiration." I'm sure a hundred books have been written on the subject and it's an issue far more "complex" than can be discussed here; however, I think men are a lot more complex than they are given credit for. Indeed the very character or the very nature of a man tends to result in an outward display of "simplicity". There's a lot going on below that surface that women don't know about or choose not to explore because it makes them uncomfortable or because they simply don't want to deal with it. It doesn't help that men are labeled "simple" because it predisposes women and wives to believe there's not complex worth discovering. All I'm saying is that there's probably a vast treasure trove of complex ideas, behaviors, and (dare I say it?) emotions lurking below the surface within your husbands that'll likely remain locked up forever because of current labels and gender expectations in our society.

I thought now would be a good time to clarify my position on the simple/complex issue because I don’t want any misunderstandings about my attitude and philosophy toward men.

If you’ve read many of my WND columns or if you’ve been following my blog for any length of time, you’ll know I’m a huge fan of men. So when I refer to men as “simple creatures” I do NOT mean it as an insult. Far from it! “Simple” can be extraordinarily profound.

When people say women are complicated, it’s not a compliment. To me, the adjective “complicated” denotes a weary acknowledgment that women are moody, emotional, hormone-laden creatures whose moods cannot always be anticipated or soothed, and who are triggered by a bewildering array of stimuli that “set them off.” And since it is not usually in a man’s nature to tune in to whatever subtle (and changing – always changing) cues his woman is giving off and expected to read, then women are described as “complicated” because it’s the most apt description out there.

I have a deep appreciation for the simple things in life. So deep, in fact, that I wrote a book about it. The essence of simplicity is making good, sound, intelligent choices. When a man embodies the manly qualities I admire (read this to see what I mean), then those choices make life easier for those around him. Some might consider it a "simple" thing when a man works to provide for his family – rather than cluttering up his decision with emotional baggage as women tend to do – but his dedication simplifies life for his family. Ain’t it cool?

And men are simple to please. They really are. Please don’t misinterpret this to mean I believe men have no depth or complexity to them. Of course they do! Instead I think it’s a blessing that for all the hard, nasty, dirty, ugly work men do, all they ask in return is for us women to appreciate and love them. I find that incredible. 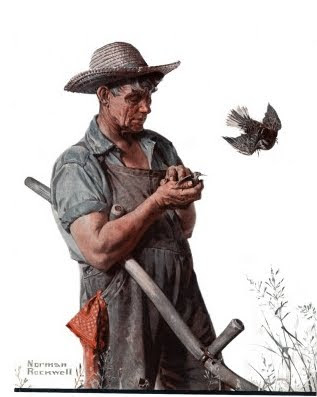 I find men are straightforward; they don’t expect those around them to be mind readers (as women often do). Their yes means yes and their no means no.

To a man (I don’t mean a “male” but a true man), their word is their bond and their sense of honor is strong. Those are simple and profound qualities. Can you imagine how much worse off we would be in this world if men didn’t have the qualities they have? Men are the ones who make the simple decision: defend their country and/or their loved ones, or die trying. Men are the ones who make the simple decision: work hard or let my family (and my honor) suffer. Men are the ones who spend their entire lives making simple, profound, honorable choices that ease the burdens of those around them. Is it any wonder I love men?

The person who left this comment wrote, “There's a lot going on below that surface that women don't know about or choose not to explore because it makes them uncomfortable or because they simply don't want to deal with it.”

He’s right, of course. Because men don’t verbally “angst” all the time like women do, women often forget men have feelings and emotions. But men suck it up. Men don’t complain. Men deal with it. Men don’t burden those around them with an endless stream of petty woes as women frequently do. You’ve heard two women talking for hours and hashing and re-hashing and RE-hashing and RE-HASHING the same ol’ same ol’. But men don’t do that. They are creatures of action, of results. Their instinct is to fix a problem, not to dwell on it endlessly.

Of course, sometimes “fixing” a problem can have devastating consequences. Post-traumatic stress disorder is a very real affliction and comes from witnessing and dealing with horrors. But men throughout history have fought wars to protect family and homelands. Without their ability to “suck it up” until such time as they can “let it go” and deal with the emotional aftermath, history would be very different. (And we’d probably all be speaking German.)

And what helps a man heal is the love of his wife and children: the respect they give him in the home and the praise and admiration he receives from those he loves. Throughout history, women have helped their men heal because the men had the strength and bravery to tackle the problem, and women had the compassion and gentleness to help heal the hurt.

That’s why men and women complement each other. Feminists would like us to believe there are no differences between the genders except for physical attributes. They are wrong. Men need the gentle nurturing qualities of women. Women need the strong protective qualities of men.

Unless they’ve been emasculated by a domineering and/or feminist woman (wife or mother), or unless boys are raised in a culture which denigrates their genetic predisposition to respect women, work hard, and provide for their families, then most men rise to the occasion. Most men are wonderful creatures whose strength and protective instincts we take for granted until those qualities are needed - or worse, gone.  If our society continues to emasculate men, if the boyish instincts are not guided into appropriate channels, then our society will lose an enormous part of what made our country great.

And that’s why I love men.
Posted by Patrice Lewis at 9:14 PM